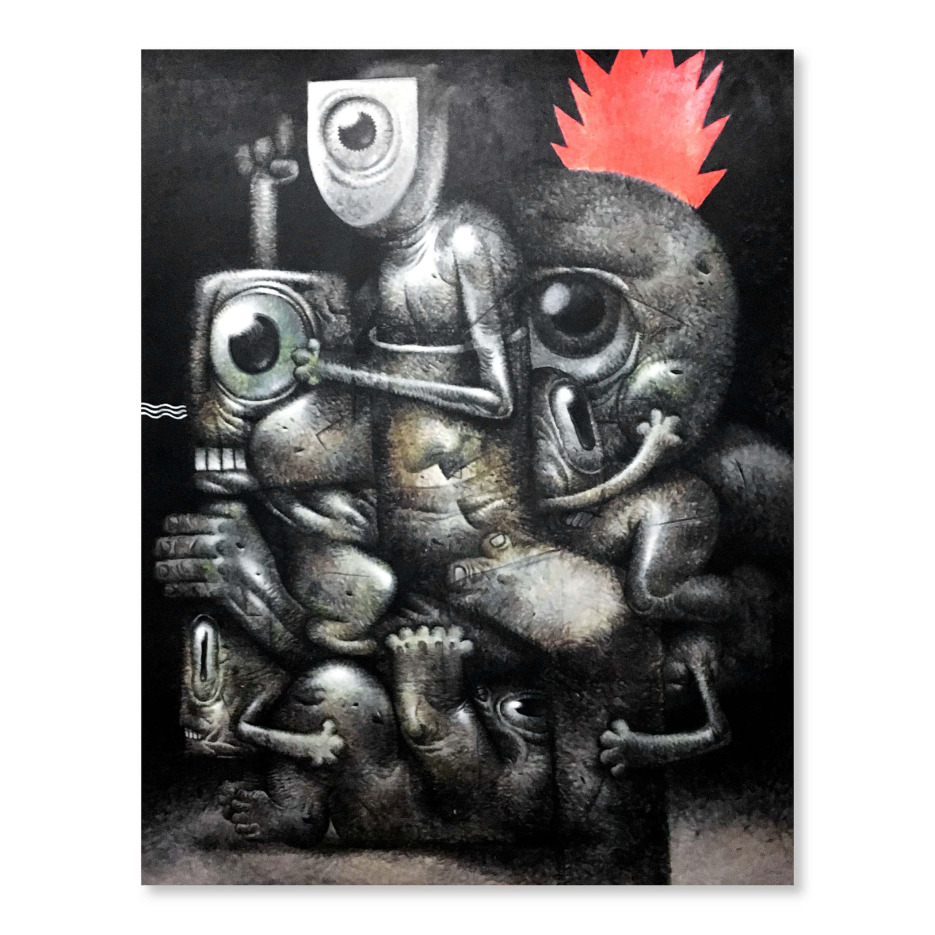 This one of a kind canvas is painted by Pisica Pătrată in 2015, during the Pisica Pătrată – Work in Progress solo exhibition at H’Art Appendix (photos 1, 2, 3).

In 2016 we had the opportunity to exhibit this large canvas at Kube, during the feeder insider pop-up exhibition. The work depicts his well-known square cat characters interacting in a different reality, where transparencies and shadows no longer reveal nor obscure meaning.

In recent years, we have been happy to have several opportunities to collaborate with Pisica Pătrată by creating one of the most beloved murals in Bucharest and a street art installation on the façade of the Capitol Summer Theatre (2008, 2016, 2017). In addition, we exhibited some of his astonishing paintings in multiple collective exhibitions at Kube, Lente, Palatul Universul, Romanian Design Week and Imbold Gallery. In the living room and the urban garden of Lente, you can find the mural made in 2016, within the series Pictăm Pereți, and the wooden totem Un-hidden Bucharest (2017). Also, in collaboration with the Un-hidden Bucharest project, Pisica Pătrată installed 6 wooden panels on the façade of the Cina building, which hosts the M60 Space (2018 – 2021). At the end of last year (2020), we invited Pisica Pătrată to paint a large canvas during the feeder sound live session with Primărie. In 2021, we had the pleasure to work again with Pisica Pătrată creating two street art interventions, one in Bucharest, within the Street Art București project, and one in Constanta during the Un-hidden Romania urban regeneration programme.