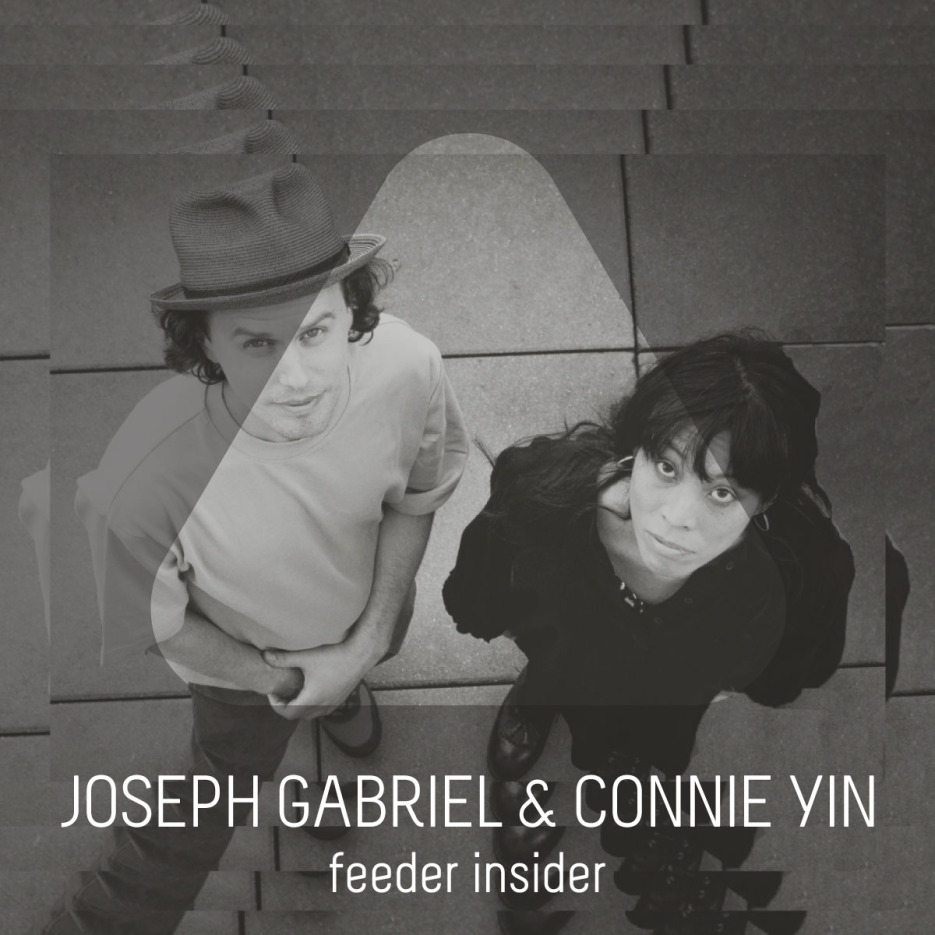 J Gabriel and Connie Yin join forces for the ‘State Of Mind’ EP this December, coming via Detroit’s Moteur Ville Musique and backed with Diego Krause and John Tejada remixes.

We had the pleasure of exchanging a few ideas with Gabriel & Connie and learn more about the Brooklyn‘s undeground electronic music scene and get behind the wonderful story about how this amasing EP was created.

feeder.ro: Hi, Joseph, Connie, thanks for taking the time to talk with feeder.ro. You have a new collaborative EP coming up on Detroit’s Moteur Ville Musique, for those yet to hear it could you tell us about it and how this collaboration came about?

Connie Yin: Joseph & I have known each other for over 10 years.  We’ve always had a mutual admiration for each other musically and personally, so it was only a matter of time that we began to meet regularly to produce music.  One track led to another, and the State of Mind EP materialized.

f: How were both of the original compositions composed, did you spend time together in a studio or was it produced remotely back and forth, what kind of equipment did you use to make the music?

Joseph Gabriel: Both original compositions were recorded at Onysia studios in East Williamsburg. The Yocto (808 Clone) and a Syncussion were the starting point for our very first session, laying down some drum ideas for what would become the title track “State of Mind”. That main synth riff, using the ole trusty Jupiter 4 came next, and somehow we got the vocal sample fitting right in. From there a couple of Rhodes chords, FX and various other sound tidbits sprinkled on top to give the track some additional dynamics and unpredictability… “Take Me Now” started with vocals and the melody, which makes up the middle bridge section. Drums programmed on an Akai MPC 3000 and the bassline played on keyboards came next – we got a nice deep bass tone from this French-made modular synth, which is basically a Moog clone. It took some experimentation and jamming to land on that bassline, but when we did it felt quite right and the track came together swiftly from there.

f: How did you come to choose John Tejada and Diego Krause to remix the record, are these both artist’s you’ve personally been following for some time or did the label pick these fine choices?

John Tejada is one of our favourite producers of all time. Needless to say, we were ecstatic to hear back from him with an affirmative on the remix!  In our preliminary conversation, he expressed his specific direction for the “Take Me Now” remix – he would utilize the original bassline as a starting point for him to interpret the track into his style. The resulting remix he delivered is that awesome powerful signature sound we love him for, and a DJ friendly vibe setter of a cut.

Diego Krause has emerged as one of the most consistent minimal producers in recent years.  His musical style is quite unique – subtlety, personality,  plus he’s been releasing pretty regularly – not the easiest combination to come by.  His releases are really well-constructed, tasteful dancefloor focused productions, as is his “State of Mind” remix.

f: Joseph, you’re also running the label Onysia which has released material from Akufen some other artists, could you tell us a little about this imprint and your plans for it.

Joseph: Yes Onysia is an NYC based label launched in summer 2019, and we also maintain recording facilities here in Brooklyn. Artists on past or forthcoming releases include iO Mulen, Akufen, Tommy Vicari Jnr, Audio Werner, Thomas Melchior, and a few more we’ll keep as surprises =] We do a mixture of vinyl and digital releases, I’d say the sound we’ve stuck to is funky deep house meets daytime friendly minimal. Heavier leaning cuts we’ve started releasing on our sister label Convent, which just had its first release and features  Steve O’Sullivan, Frazer Campbell, Arkajo, and Chuffing Buffy in top form. Onysia’s release calendar is basically filled through next year, so full steam ahead! We’ll also be doing Onysia showcases when the time is right, some in collaboration with other local crews who have been an integral part of our growth and development.

f: Connie, you’re a resident of Resolute in New York, for those people who haven’t been fortunate enough to party there could you tell us a little about what Resolute is and what it represents for you?

Connie: Resolute NYC began as a collaboration between 2 promoters and 2 resident DJs back in 2007 to fill a void in nightlife when large nightclubs (many in Manhattan) were shutting down, one by one. Resolute started throwing smaller DIY events at warehouses largely in Brooklyn. It has since then quickly grown into an internationally-recognized force in music event production.

Resolute events are known for quality dance music, diverse crowds, and usage of unconventional spaces transformed by top visual artists and production teams.  Every event is a memorable experience! To me, Resolute represents music and community… A community of people from all walks of life, bonded by their love of music… and taking a life-long journey together. I feel blessed to be a part of the Resolute family.

f: How did you end up releasing with Moteur Ville Musique?

Joseph: Kev O’Brian, who also helps manage Onysia, first introduced me to Emilio and MVM some years back.  We’ve been working closely since, and it’s been an awesome experience. We sent them the State of Mind EP and they wanted to sign it.  The remixes we’re already finished and part of the package we presented, so that made things extra appealing I’m sure =] There are some really excellent things in the Moteur Ville Musique pipeline coming up, quite excited and really happy to be a part of this ever-expanding label.

f: Could you please both share something with us outside of music that you’ve been spending time with lately, maybe a book recommendation, a TV series, movie or something else?

Joseph: Been reading the Game of Thrones series, for the second time through! I find it somehow meditative and super inspiring, being transported to this other world which is so immersive… and the prose is approaching high literature far as I’m concerned, it’s really a 10/10 all-around – Pretty much every night reading myself to sleep, love this habit.

Connie: During the pandemic, I decided to watch the Star Wars movies in chronological order. I’m impressed at the amount of detail that is in the series.

f: What else is on the horizon for you both and anything else you’d like to share?

Connie: Joseph and I have a few more tracks on the horizon for the upcoming year, with a music video to go with that.  Stay tuned!

Joseph Gabriel & Connie Yin – State Of Mind EP is out now on Moteur Ville Musique! Grab your copy at deejay.de or other online record shops.