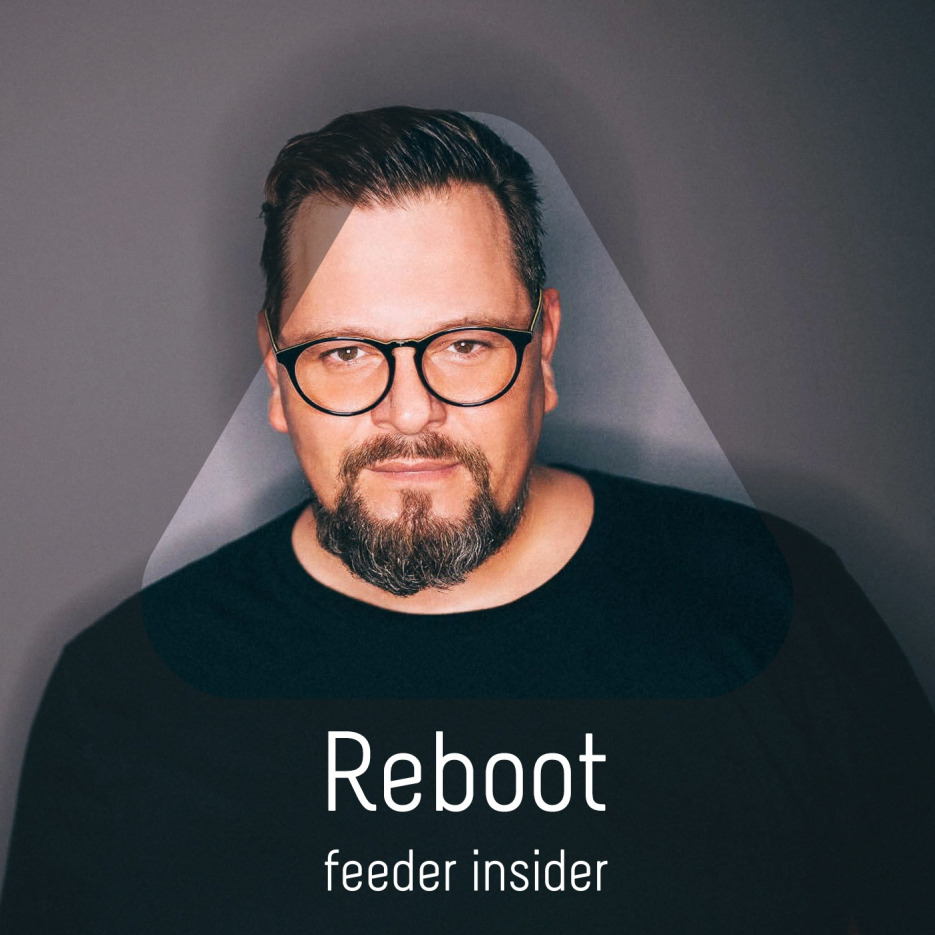 German artist Frank Heinrich aka Reboot has been active in the electronic music scene since he was young, mixing at well-known venues around the world and spending countless hours in the studio. With works released by labels like Cadenza, Cocoon, Get Physical, Below, Circus, Noon, Love Letters From Oslo, Hommage, Be Chosen, Sei Es Drum and Cécille, among others, his inquisitive musical nature constantly pushed him to experiment with new sounds and rhythms. This has allowed him to develop into a compelling performer who feels equally at home behind the decks or playing live.

At the news of new productions getting ready to be dispatched through Pleasure Zone, we invite Reboot to reveal more about the upcoming release, his vision on music and other inspiring information about his activity.

feeder.ro: Hello Reboot, and welcome to feeder.ro! We heard that you’re about to release some fresh works with Pleasure Zone and that stirred up our curiosity. Tell us more about this endeavour and how it came to be.

Reboot:  Thanks for having me! Yes, a two-part double vinyl EP on Robert Dreweck’s Pleasure Zone is on the way. Part 1 should be released at the end of January and the second one shortly after. As Robert and I are both from Frankfurt, we have crossed paths every now and then and know each other for many years already. I have been following his label since the first releases and have been a fan ever since. Both of us had the wish to do something together for a couple of years already and now everything came together perfectly, so it was the right time to do it. The pieces were created during the first time of the pandemic and to a certain extent reflect my mood at that time. Overall, they are more personal and the narratives are pure club tools. That’s why I believe they are in good hands with Pleasure Zone.

f: Do you prefer for your audience to have a more conscious experience when they listen to your music, or would you rather touch them on a deeper level, where the unconscious part of our minds & bodies react?

R:  There is no clear preference for me. I also believe that this is a very individual perception. One person’s avant-garde jazz is the other’s elevator music. My music speaks to some people subconsciously, to others through certain stylistic devices, to others not at all. First of all, I am grateful when people even deal with my music in any way. With the amount of output and talent nowadays, that really cannot be taken for granted. I personally would prefer to listen to some of my productions on headphones while walking in the woods, while other tracks need a physical context, such as a monstrous subwoofer, in order to function properly. That really depends. As far as my shows are concerned, it’s just important to me that people have fun, let themselves go and go home with a smile. I’m just trying to do my part.

f:  How do you translate certain thoughts, ideas or events from everyday life into sounds?

R: To be honest, I try to think about it as little as possible. The best music somehow comes from the gut. The less I think about how I capture something or bite down on a specific idea, the better for my way of working.

Often you also have an intuitive feeling of what kind of sound can intensify or diminish a certain emotion. I then try to rely on that intuition as much as in any way possible. Knowing your tools is also rather important.

A Moog adds a different character than a DX7. Over the years, you get to know the characteristics of your sound generators. A bit like a painter, knowing his colours and brushes. That helps me to express my feelings easier.

f: With almost 15 years of experience in the scene, can you tell us what changed from your point of view? In what direction do you see electronic music going? Is there anything new left to be discovered out there?

R: Evil tongues would say that at the core, nothing has changed at all. It’s still mainly about money, reputation and flex. But that would be too short-sighted in my opinion. The main mechanisms of the industry have remained very similar, but especially with regard to social development, acceptance, career opportunities and the technical possibilities to realize oneself creatively, I believe that electronic music is bigger today than ever before. Despite all prophecies of doom, house and techno are neither yesterday nor dead but have become an integral part of popular culture. And so did the subcultures/genres, which were tiny at the beginning, turned into big movements that gave many the opportunity to develop creatively. The entry hurdles were completely different when I started 30 years ago and to be heard you had to jump through a few hoops. Musically we are, in my opinion, in a constant state of development. Old becomes new, styles blur and technical progress, such as artificial intelligence, for example, ensure progress. I try to stay curious and think outside the box, so there is always something fresh to hear.

f: Throughout time, you released a lot of albums, EPs, remixes, edits and collaborated with many artists, notably Luciano, Ricardo Villalobos, Juana Molina or Marshall Jefferson. Tells us an inspiring or funny story about the making of one of your releases, that will forever remain in your memory.

R: One story I will never forget is the one of Caminando of course. During my first ever stay in Brazil in 2007, the promoters of my show gave me a CD with some Brazilian folk recordings. It contained the live version of Geraldo Vandré – Pra Dizer, performed by Simone. The track blew me totally away, so I made a quick playable edit at my hotel room. When I played it the other day, I shared the stage with Ricardo Villalobos, who totally freaked out about me playing this tune. It was a very emotional moment. It turned out, that the original composer is Ricardo’s uncle! The world is a village and so we decided to make the release together back then.

f: What are your favourite machines when it comes to gear? How about mixing, digital or vinyl?

R: Toys! My favourite subject. There are some devices that I would not want to miss anymore. They also have a significant influence on the sound of my productions. For example, the Elektron Machinedrum, the MOOG Voyager, the Korg ESX or my modular system. When it comes to mixing in the studio as well as my DJ shows, I’m no longer overly puristic. In my studio, I currently use a hybrid solution and mix almost completely in the box. It’s just a lot more comfortable and since almost the entire sound generation is done with analogue equipment, it doesn’t make a big difference to the end result (budget is a factor of course). At the moment I prefer to play vinyl and CDJs. But that can change from time to time. I don’t want to commit myself too much. I used to play a lot of live shows, so working with a computer doesn’t feel wrong to me either.

The most important thing is that you are happy to be involved and that you have exciting music in your luggage. I think the discussion about the right or wrong medium is old.

f: Unfortunately, the pandemic has taken a heavy toll on everyone, including the electronic music industry worldwide. Things are now slowly coming back. What did you do all this time, and how did it influence your creative processes?

R: And suddenly our world stands still. The past few months have not been easy and for many still are not. For a long time, one could not help but get the impression that the cultural sector has no relevance for society whatsoever and that aid has only arrived slowly or not at all. And like many others, I also asked myself whether I can continue to do this full-time in the future. I then concluded relatively quickly that I didn’t want to do anything else and threw myself into work more than ever before. I learned, read a lot and developed myself in the studio. I have been doing mentorships, collaborations, teaching at the SAE Institute, created a sample pack and worked on some projects aside from electronic music. And most of all, I have been working on new Reboot material. The time with the family was also so valuable that, despite all the negative things, I came back with wonderful experiences and memories from this time. But after having musically processed the hundredth walk in the forest, one longs for a great sound system, sweat on the ceiling and happy faces. It’s really time to get back on the road.

f: Have you thought about launching your own record label?

R: My manager at the time and I ran the Noon Records label until 2017. For the sake of honesty, I have to admit that I had little to no interest in the actual label work at the time and that I put my energy into other things. Back then it seemed like a smart move, but it’s like always in life, if you don’t throw yourself into it with all your heart, then nothing will come of it. The experiences from then still help me to this day though.

I had already decided some time ago to tackle the topic again and my new label RBT. is now in the starting blocks. On the one hand, the label should serve as a release platform for my own productions – both with the remastering of old pieces – as well as with new music and on the other hand, in the future, it will also be opened for other artists who I find exciting.

The first release will be a limited vinyl with a current Caminando remaster and is due for the end of October. But I won’t be releasing new music on RBT. until 2022. The current situation in vinyl production is extremely tense, delivery times are eternal and the economic risk is high. So step by step.

f: On your previous gigs in Romania, did you get the chance to dive into the Romanian underground minimal movement known as Rominimal? If so, what are your thoughts about it?

R: Of course. I share a lot of wonderful memories with artists like Rhadoo, Pedro, Raresh or Livio & Roby, on and off the stage. I’m following the scene and some of my favourite pieces from this year come from Romanian producers. Musically, I feel at home with this style even in its origins. Even if some of my own things are intended for peak time, many of my productions share the same elements and stylistic devices. It’s also great to see how big the local scene has become. I’m really looking forward to my return.

f: Tell us what other things capture your attention or what are you enjoying aside from music. Thank you!

R: Most of my attention goes to my family, our little dog and the garden. That’s grounding and gives me the balance I need in life. Especially in the past 2 years, I have also come to appreciate the closeness to nature even more and now I spend a lot of time, walking in our forests. Otherwise, I’m a passionate hobby cook, I deal with photography and if there is still an hour left, I play From Software games. Nothing crazy, but it makes me happy.