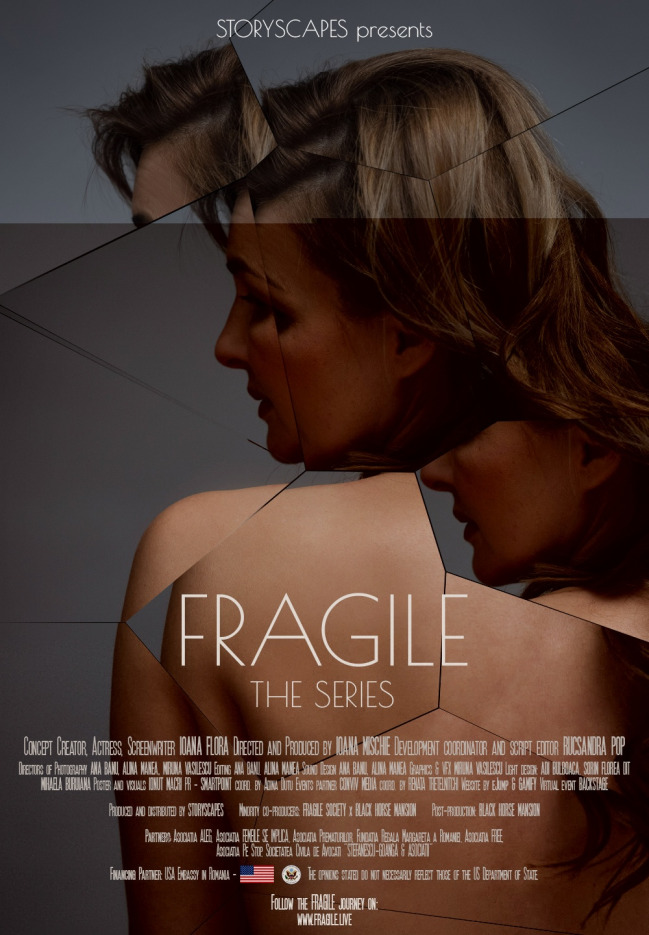 FRAGILE is a Romanian creative documentary reflecting on the contemporary challenges of womanhood and their active process of healing. Plot-wise, numerous Romanian multi-generational women that overcame inner trauma are sharing their most vulnerable stories interpreted by one Romanian lead actress, Ioana Flora. The series is the first of its kind with a women-driven core team behind. The project aims to facilitate a community of support for women in need and also to help prevent future traumas.

The documentary world is ongoing and has launched the first five episodes on the official platform: www.fragile.live The newest five modules are united in a feature documentary currently in the festival circuit. Astra Film Festival will host the world premiere in the national selection. While being acknowledged as a major event in the European film community, the Festival is located in Sibiu – Romania, offering competitive sections along with a variety of programs showing the diversity and the current tendencies of documentary film.

FRAGILE is directed by Ioana Mischie, the creator of transmedia franchises with social impact such as Government of Children or Tangible Utopias. The project is initiated and written by Ioana Flora, multi-awarded Romanian actress, while the script research and partnerships are coordinated by Rucsandra Pop, accomplished writer. All the stories belong to real women who have accepted to share their life journeys anonymously. Having as a tagline “women are not made to be broken”, the entire cinematic journey blends empowerment and fragility in the confessional life stories.

“Through FRAGILE, we are launching a multitude of questions: how can we succeed to rewrite and to co-write together, as a community, a more qualitative and multi-dimensional definition of womanhood in the XXIst century? How can we achieve a status of collective healing, not only individual healing? How can we transform the methodologies of contemporary filmmaking into therapeutic practices?” said Ioana Mischie, director/producer. The project is designed in a modular manner and will be accessible for the public both as an episodic and also as an anthological feature film.

FRAGILE is produced by STORYSCAPES, which emerged as the first Romanian association focussing on transmedia franchises eight years ago. The project is co-financed by the U.S. Embassy in Romania, through a grant destined for Fulbright Alumni (Ioana Mischie, Rucsandra Pop) which was won by the applying team. The partnerships that the project succeeded to secure additionally helped it reach a level of complexity that is highly ambitious for independent projects. The entire team of the project reunites women creatives and technicians, including Black Horse Mansion as a post-production collaborator, leading the editing, sfx, vfx approach of the project. 7 non-profit associations focussing on the rights of contemporary women have joined the project in their attempt to form a support system. The web platform facilitated by eJump and Gamify, the PR facilitated by Smartpoint are completing the project in a compelling manner. The poster and extensive visuals are signed by Ionuț Macri. The minority co-production partners of the project are Black Horse Mansion and Fragile Society.

The entire process of production and post-production took place during the pandemic, however, the team designed safe methods to overcome the challenges. The mosaic of perspectives collected from women across the country is the beginning, as the web project will accept submissions of personal stories from multiple extensive regions on a rolling basis. Having a scalable approach, FRAGILE will continue the archival of yet unconfessed facets of womanhood.