Alucina! Returns to Burning Man Online with official stage and weight line up 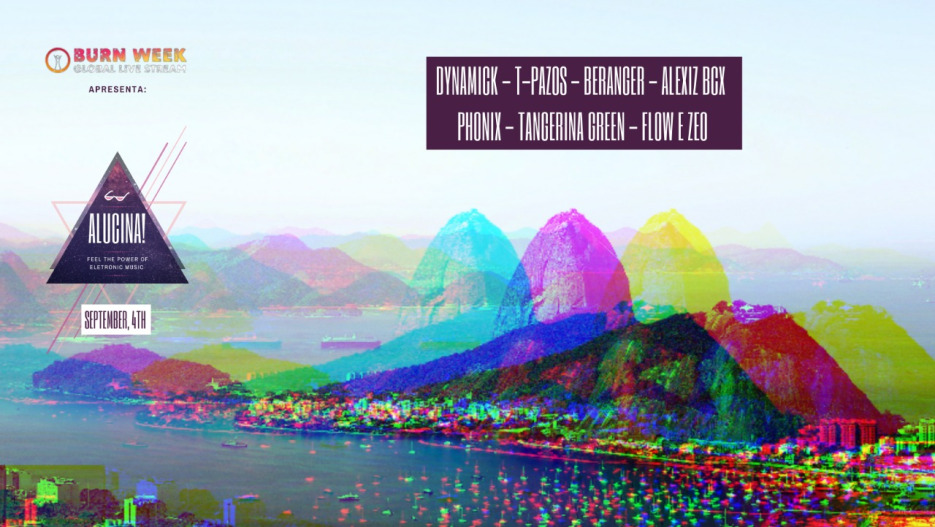 This year’s Burning Man once again takes place online with the Virtual Burn event and who will be present again is Alucina party, maintaining the same live format, but now even bigger: with an official stage to call yours and a breathtaking line-up with 7 DJs of the scene on Saturday (4 September) during Burn Week.

The festival is one of the largest electronic music festivals in the world and officially takes place in person annually in the United States in Black Rock City. Since 1986 it has maintained its concept of going beyond a simple music festival, and is also an experiment of art, community, self-expression and self-sufficiency. With open arms, they once again opened space for artists and producers from all over the world.

Alucina was born from the producer and Marketing Manager, Fernanda Destefane (Destefane Produções e We.Strategy) and the artist Gustavo Tavares (Tangerina Green), in order to foster the electronic scene not only in Brazil, but in the world, which fitted perfectly with the premiere of the party in live format at Burning Man Online last year. This time now, in addition to having an official stage within the platform, the line-up features Alexiz BcX, Beranger, Dynamick, Flow & Zeo, Phonix, Tangerina Green and T_Pazos.

Alexiz BcX: With a consolidated career in the electronic scene both nationally and internationally, the artist collects great achievements. In Europe, it has already opened the stage for big names such as: Adriatique, Phillip Straub, Dubfire and Luciano. Alexiz won Burn Residency 2017. His music brings quite a reference to melodic Techno, House, Down Tiempo and Minimal. This season, the artist is in the process of finishing his album that talks about the various forms of love that he lives and understands. Alexiz seeks to engage his audience, conveying all his feelings and knowledge through music.

Beranger: The DJ/Producer and partner of Me Gusta Records has been standing out more every year in the underground scene with sets that pass through the strands of House, Minimal and Acid with hints of Electro, Breakbeat, Dark Disco, Indie Dark and Techno. He has been through clubs and heavy parties such as D-Edge, Fishbone, Bunker Festival, Bloco AME, Freak Chic, among others and shared the decks with great icons of the scene, such as: Andreas Henneberg, Boris Brejcha, DJ Meme, Leo Janeiro and more. Its releases have also gained relevant positions on the sales portals, such as #13 in the  Minimal/Deep-Tech TOP 100 Hype, #44 in the Minimal/Deep-Tech TOP 100 at Beatport and Top 10 at Brasbeat.

Dynamick: Producer of only 15 years old, Dynamick is arguably one of the main names of the new crop, with consistent releases by record labels such as: HUB, Controversy, Spinnin’ Records, LEMON and BRASLIVE. In addition to weight supports: Alok, Fedde Le Grand, Bingo Players, Jay Hardway, KVSH, DISORDER, Plastic Funk and AfroJack. As a sound proposal that blends Lo-fi, bass, tech house and R&B, Dynamick is sure to feature a singular, energetic and full of copyrighted tracks showing all its versatility. The project counts more than 460,000 streams on its Spotify and more than 50,000 monthly listeners. “Everytime” (HUB) and “Nothing Serious” (UPRISE) have passed the 100,000 plays mark.

Flow & Zeo: Connected by love and music, Marian Flow and Zeo Guinle form the duo Flow & Zeo representing Brazil through the 4 corners of the globe at festivals such as Fusion and Love Parade in Germany, Subsonic in Australia, Northern Nights in California, Rock in Rio, Tomorrowland, Universo Paralello and many others. In addition to DJs and producers for more than 20 years, they produce reputable parties on the scene such as Noon, Watergate in Rio, Raww x Room, Level, among others, and manage Tropical Beats Music label.

Phonix: On the scene for almost a decade, the DJ and music producer is a well-known figure on the nights of electronic music in Rio de Janeiro. Creator of the Conception Festival, in his career participated in events such as Warung Tour Rio, Bloco AME, Noon, Level and Tasty alongside artists from the national and international scene. Today, alongside its partners Flow & Zeo, manages the label Tropical Beats Music, selecting the best in the electronic scene.

Tangerina Green: Gustavo Tavares, musician behind the Tangerina Green project, was once a finalist in the “Geleia do Rock” program at Multishow as a drummer and today, follows the aspect of electronic music as a music producer and DJ, but without leaving aside his musician vein, he brings the concept of live performance with electronic instruments. His first single “Só Larga Tudo e Vem” marks his differential by singing and playing his own composition, with influences from House Music. His second single, “Coisas Boas”, brings the same footprint and will be released on 2 of September with a special performance on the main stage of Burning Man this year.

T_Pazos: DJ and producer Thiago Pazos has strong relevance in the Brazilian scene with its releases and management of labels such as Me Gusta Records, Ecdysis and Sektor 021. In a mix of influences, his compositions are filled with organic timbres and “mesmerizing” synths and have already gone through national and international labels, such as: Voltaire Music, UP Club, Awen Records, Rezongar, Muzenga Records, Prison Entertainment, Abstract Channel, Uxoa Dutxa Elite, in addition to Dear Deer Records, where he achieved his best sales result with the EP “Glass Mountain”, released in 2018, placating the two tracks in the positions #17 and #31 in the session “Melodic House & Techno”, the renowned beatport site.