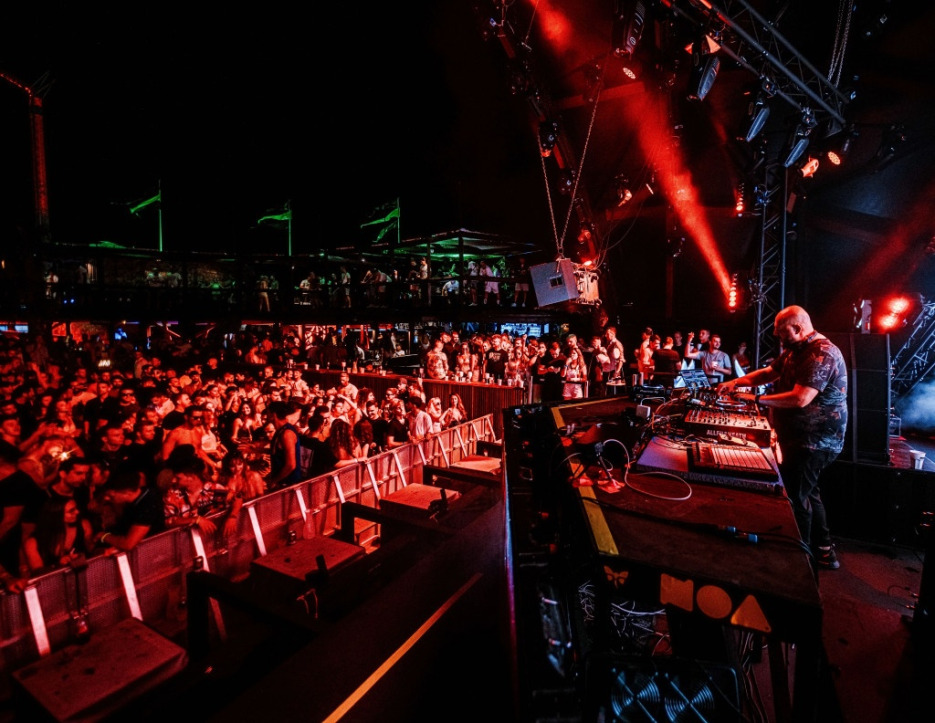 After such a weird 15 months it felt truly surreal to be on a place to Croatia for BSH Island, one of the first events in Europe to be going ahead this summer. All attendees had to do was double jab or test negative and as soon as they arrive there were no further restrictions. Absolute bliss considering the circumstances! The location is a perfect one on the lush beach, by the clear green-but Adriatic sea with the sun beating down.

The musical action is mainly centered around Noa Beach Club, with other venues such as Kalypso also getting a run out. It is well known around the world as open air space, with tasteful design, palm trees, world-class sound and a similar vibe to what you find these days in Ibiza. It is an emotional place to be at first with lots of people just delighted to finally be allowed out to party together.

There is a nice and cosmopolitan crowd of punters from all over Europe in attendance. When we arrive some skilled warm-up Das are getting things going but the main draw is Paco Osuna, the Spanish techno titan. He kicked off with Phonique, Jean Bacarreza – Do U Piano, a sample of a Defected classic on Nhan Solo’s Superfett label and went tougher with loopy tracks such as Antonio Rec’s Dance Baby. The highlight of the set was an unidentified piano number which the crowd really lapped up as he worked his laptop hard.

Day 2 was the real standout for us. We head up to the Fortress of Pag, an ancient fortress designed as a lookout over the seas in centuries gone by. For one day only it was a playground for Amnesia who had come over from Ibiza with some key DJs in tow. Marco Faraone took over just before sundown playing acapellas of Adonis’ Rockin Down the House and classics such as Sven Vath & Anthony Rother’s Komm, with other tracks Faraone played included the likes of David Penn & Roland Clark – The Power, George Fitzgerald – Every Inch (Deetron Remix) and more. A real outstanding set, that’s for sure.

Jamie Jones got a big reception when he came on around 8:30 pm as wild smoke machines and plenty of vivid graphics from Amnesia made the fortress a real haven. He even played an acapella of Lets Have a Kiki by the Scissor Sisters – unexpected? Definitely. Inspired? For sure. Elsewhere, Richy Ahmed – who earlier knocked in to say hello to Jamie – closed Noa Beach Club, with many moving from the fortress to the Beach Club immediately after.

Day three we took as a bit of a rest day, just catching Marco Faraone back at Noa who then later did a special unannounced b2b with his good friend, Spanish DJ Dennis Cruz. The same dancers were seen from the first night to last at every venue so they are a truly dedicated bunch. The final day was an exclusive yacht party at sunset with Richy Ahmed and his mates, while Do Not Sleep brought the techno on the main stage at Noa with Ilario Alicante and Sidney Charles. Charles played mainly house and Alicante went with more rolling techno.

BSH Island has slowly but surely become a treasured getaway in Croatia. It has a nice relaxed vibe, world-class music and the sort of friendly, welcoming crowd that make it all the more special. Roll on next year. Below we’ve listed some of our favourite weapons we encountered over the four nights of crazy partying. What a few days!