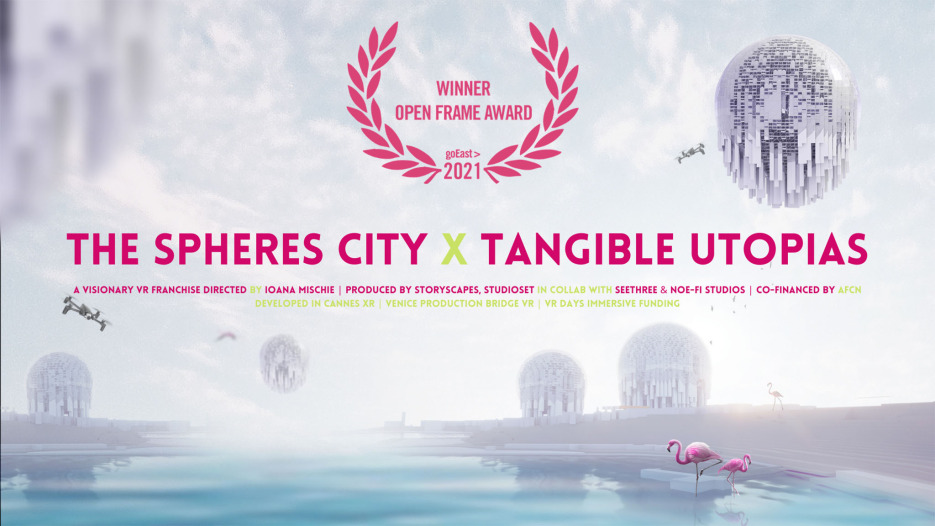 The Spheres City, the first futuristic habitat of Tangible Utopias wins the Open Frame Award, at goEast Film Festival, becoming the first internationally awarded Romanian VR project, a milestone for the immersive entertainment field. The experience was displayed on Viveport during the online edition of the festival and was joined by a pitching session detailing the process behind it.

“We are honoured and happy to distinguish the project “The Spheres City – Tangible Utopias”  through this award. We acknowledge the long term ambition of this meaningful project that will develop and grow over the coming years, giving a voice to children in such a creative way, embracing and celebrating them as our true hope for our global future.”  was the motivation of the OPEN FRAME AWARD JURY (Michel Reilhac, Jimmy Cheng, Maria Courtial).

“We are infinitely humbled to receive this award and we warm-heartedly dedicate it to the visionary children worldwide. This recognition invites us to believe there is a solid future both for daring civic imagination and for meaningful transdisciplinary VR practices. Artistic VR has the power to facilitate profound societal change on the short, medium and long term if used wisely.” – Ioana Mischie, transmedia artist/futurist, during the virtual award ceremony.

The VR experience was the only Romanian VR project nominated for the Open Frame Award, at goEast Film Festival along with selected projects from Ukraine, Poland, Croatia, Russia, Austria and Germany. goEast Film Festival is dedicated to the artistic heritage of Eastern European film and New Media. The agenda of goEast, conceived as a forum of East-West dialogue, is dominated by questions of (multiple) European identities and processes of rapid social and political transformation. The participants from Central and Eastern Europe presented virtual reality and 360 projects curated by the XR pioneer Georgy Molodtsov. The Open Frame Award prize, granted by the BHF Bank Foundation, beckons the best immersive work evaluated by an international jury.

For the creative team, The Spheres City is the first interactive computer-generated VR experience and being part of the GoEast community is a recognition of the innovative quality of the work.

The Spheres City – a beginning of a larger tangible utopia movement

The Spheres City is the first pioneering habitat of Tangible Utopias, inspired by the ideas of Romanian children, with ages in between 7 and 12 years old, regarding the evolution of human cityscapes in the future and brought to life by a transdisciplinary team reuniting architects, 3D artists, sound designers, developers or music composers. The experience invites the users to compare whether we aim to steer cityscapes towards an extreme technological approach, an extreme natural approach or a balanced version of the two. The virtual choice may form an elevated awareness that we can shape fundamentally our current surrounding real world as well. The current VR scenario is based on approximately 5 ideas chosen from over 100 archived visions of Romanian children.

Tangible Utopias began as a first innovative VR franchise that immerses us in what it would be like to live in a world designed according to more playful and out-of-the-box societal principles. What if nature would be integrated into our human habitats in a highly organic manner? What if our cities could become highly adaptive and could respond to our feelings? What if we could customize the colors and textures of buildings one day? What if long-term cities could become not only functional but also playful, enchanting, inspirational? What if we could customize our future habitats in advance?

The project began as an artistic journey of writer/director Ioana Mischie that aimed to extend the transmedia project Government of Children, which reunited more than 100 children envisaging the next century of their society in a feature-length 3D documentary. Having this cinematic journey as an inspiration, Tangible Utopias aimed to bring life, form and rhythm to the initial ideas that were mostly captured in forms of interviews or drawings. The visionary ideas turned into virtual worlds. The extension of a film became a universe in itself as Tangible Utopias matured into a journey of its own.

The VR universe is conceived as a meditative, exploratory, interactive journey, in which explorers can inhabit and test the feasibility of utopian future habitats. The experience is designed to serve also for debate purposes. How would you improve the envisaged worlds? How could the culture or rituals in a habitat of this kind look like? How would humankind evolve in a holistic habitat of this kind?

Storyworlds like these open up new horizons and new production approaches in the field of XR such as prototyping the idea of XR franchising:

“We like to believe that VR as a medium of expression can become franchisable, scalable over time. Imagine the power of a project like this when being elevated by transgenerational, transreal, transdisciplinary and transmedia practices – it accelerate not only our creative capacities, but our life quality on the long term.”

The process behind the project can prove to be a set of good practices also for the film industry, where the pandemic crisis has had an unforeseen impact and remote computerized work became a major need for compatible projects. The techniques used in Tangible Utopias can be replicated in animation films. The project supports the use of VR technology for meaningful purposes like promoting civic engagement and has layers of an edutainment project, which combines education and entertainment for both children and adults.

The Spheres City does not only impact the architectural realm, but it also shapes and redesigns new genres in the audio-visual industry, which comes as a bold move. Noe-fi is an audio-visual genre initiated in Ioana Mischie’s Fulbright doctoral study which serves as the basis of the current universe. Unlike the sci-fi genre that bases the creative act on the accelerated evolution of science or technology alone, noe-fi

“imagines futures focused on the evolution of human consciousness. We want to prototype advanced forms of collaborative fiction to generate, in the end, not only virtual realities, but also societal realities, with a high degree of complexity and meaning. Ideally we wish to create holistic artistic worlds that can be viewed not only in cinemas or in purely artistic spaces, but in as many levels of our societies as possible,” says Ioana Mischie, the project’s creator.

Romania’s VR scene reunites mostly industrial products: VR exercises related to tourism, real estate or commercial extension. Artistic VR is highly rare globally still and projects of this kind are often pioneering new methodologies and approached that advance the medium. The current project was initiated in 2019 as a concept and received its first development micro-grant in 2020 from AFCN (Administratia Fondului Cultural National) to cover the basic needs of securing a development team. However, given the scale of the ambitious virtual universe, the team argues that there is a strong need for empowering VR industries exponentially more in order to achieve outstanding results.

“Countries like France, Canada, Israel have custom made policies for VR empowerment, financing and promotion. We believe Eastern Europe has an infinite amount of talent and digital infrastructure, however it lacks a holistic policy to support artistic XR development. This is what motivated us to create the Eastern European XR Alliance, an accelerator of the industry and we are hoping that both as creators and as facilitators we can succeed to push innovative boundaries at an unprecedented rate.”, added Ioana Mischie, co-founder and board member of EEXRA.

Based on a concept created by Ioana Mischie, the independent project was joined by a transdisciplinary team of passionate professionals reuniting architects, landscapists filmmakers, gameplay consultants, anthropologists, sociologists, educators that shaped the visionary ideas into highly feasible habitats.

The project is produced by the Storyscapes Association, in collaboration with Studioset, SeeThree, Noe-Fi Studios and is co-financed by the National Cultural Fund Administration.

The architectural design of the first cities is signed by Alexandru Pop, a Studioset 3D artist that has a generous background in architecture. The 3D models are signed by Călin Bogdacenco and Alexandru Pop, while the soundscapes and original music are created by Ina Bozdog and Andrei Nechifor. The visionary cities were integrated in Unreal by Mircea Olteanu, while the blueprinting interactive pipeline was created by Adrian Tăbăcaru. The level design is advanced by Dimitrie Grigorescu, Horia Spirescu, Andrei Bîrsan, Minodora Toma, Andrei Păun. The advanced interactivity was facilitated by VIGA STUDIOS  represented by Vivek Reddy. The project has numerous educational partners  (Organizația FDP-Protagoniști în educație ) and transdisciplinary consultants: Laura Grunberg (sociology) / Alecu Tudose (architecture) / Grig Vulpe (anthropology) / Carmen Andresoi (education) / Vikram Jotwani (growth strategy).

Given its continuous nature, both children and transdisciplinary professionals are constantly invited to join the team in order to co-expand the virtual universe.

Future habitats inspired by the visions of children enrolled in Government of Children: Julia Marcan, Vlad Chirițescu, Martha Buia, along with hundreds of Romanian children.

Co-Financed by The Administration of the National Cultural Fund

The project does not necessarily represent the position of the Administration of the National Cultural Fund. AFCN is not responsible for the project’s content or for the way in which the results can be used. These are entirely the responsibility of the financing’s beneficiary.