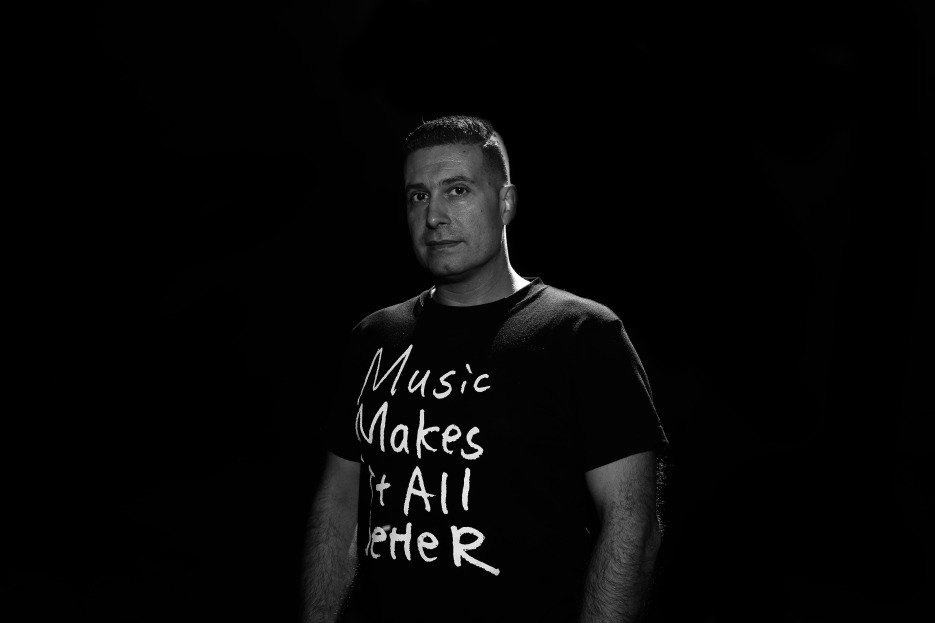 Toronto based DJ Stoim has been playing on the house scene for 20 years. Recently turning his hand to production in 2020 with ‘Forgive’, featuring Lee Wilson on Double Cheese Records, Stoim returns to the label a new collaboration with South Africa’s Unqle Chriz on ‘With You’. Feeder.ro checked in to find out more…

feeder.ro: Please tell us a little bit about where you’re from and what turned you on to DJing?

Stoim: I was born and raised in a small city in the north-east part of Greece called Drama. In the pre-internet era, keeping in touch with electronic music required a lot of effort so I would go to local record stores (that I would eventually end up being employed by!) to keep up with the latest trends and stay informed with all the new releases.

f: What does your name mean?

S: Stoim is a short form of my last name, Stoimenidis, which was considered too long even by Greek standards! My middle school friends started it and it stuck.

S: The music I have released to date is soulful, danceable, using vintage instruments and percussion. It tells a story through lyrics and sound.

S: From a young age I could be found digging through my father’s record collection and I became familiar with Soul, Funk and Jazz from the 70s.  I was influenced by the sounds of James Brown to Stevie Wonder to Prince and so many others. They definitely have an influence as they all have significant characteristics in the style of music they represent that move and inspire me.

S: Deee-Lite – Groove Is In The Heart

f: You have been a DJ for 20 years, what has been your most memorable gig so far?

S: Because I have been DJing for so long, it is very difficult to pick one as the most memorable gig. A big, packed nightclub might generate the same intense emotions as a small intimate private party with people who are into my music. It’s not the same experience, but equally impactful, appreciated and important.

f: What do you miss most about DJing and are you looking forward to getting straight back out there once the Covid-19 pandemic ends, or will you be looking to do things differently?

S: What I miss most about DJing, without a doubt, is communicating with my audience through music. I love performing and am energized by it! When the pandemic ends, my hope is that as we pick up where we left off but also with more enthusiasm and gratitude for what we have missed and love. Things might look different; perhaps there will be adaptations to a new reality, but I am looking forward to embracing what comes, as long as it involves interacting with an audience again.

f: Have you, or will you be embracing online DJ set streaming at all? What are your thoughts on it all?

S: At the beginning of the pandemic, I did sustain a consistent streaming presence. As copyright infringements made it more challenging to stream uninterrupted, as a DJ it started to lose its appeal, but as a listener, I enjoy DJ set streaming thoroughly. However, spending less time prepping DJ sets allowed me to spend more time on upcoming studio projects.

f: What can we expect to hear from a typical Stoim set?

S: I approach my DJ sets with an open-minded music policy, without bias against any genre, style or era. I always consider the crowd I am playing for, the location, the time slot, the environment and I select the music accordingly. I like to choose tracks that can stand on their own, played in their entirety. Every song must be of a certain quality and should be able to transcend a feeling. I don’t believe in fillers. As a fan of long DJ sets, I appreciate the opportunity of taking my audience on a musical journey across the spectrum without limiting myself to current trends or the ‘flavor of the month’.

f: You burst onto the house scene last year with your first production ‘Forgive’ with Lee Wilson. How difficult has it been as a relatively new recording artist to break onto the scene and what tips would you give others who are just starting out too?

S: While it is easier than ever before to make and share music, an over-saturated industry has made it very difficult to stand out since everybody has access to the same marketing and promotion tools. To others who are starting out, as cliché as it sounds, never give up. Someone will notice your efforts, and perhaps when you least expect it. Discover the signature sound that makes you recognizable. This takes time, patience and maybe some trial and error, but eventually realize what sets you apart.

f: What made you decide to finally start making music after DJing for all these years?

S: Having started my DJ career on the other side of the world, when I made the decision to move to Toronto, my priority was to establish myself as a DJ and become financially independent. Making music was always a goal and one I knew I would eventually achieve; it was just a matter of when. In a way, the decision was made for me. The Covid pandemic forced a change in my schedule, and it afforded me the luxury of time, which I did not have before.

f: You’ve just released your new single ‘With You’ featuring Unqle Chriz, what can we expect to hear?

S: ‘With You’ is a soulful house tune with a groovy bassline, funky rhythm guitars, warm jazzy keys, a flute solo, and sprinkled with some Latin percussion.

f: What’s the song about?

S: Like many of my songs, love, in its many variations, is the dominant message. ‘With You’ is the plea of a man that still loves his partner after a hurtful breakup. The message is to trust what they created, what they had and what they could continue to build.

f: How did you link up with Unqle Chriz and will you be working together again in the future?

S: I was familiar with Unqle Chriz’s work and always loved the soulful delivery of his lyrics with sensitivity. We connected via social media and vibed instantly. He is easy to work with and his versatility allowed us to collaborate on an upcoming project called ‘Servant Of God’, that brings together Gospel lyrical content with deeper afro-influenced sounds.

f: Who else would you like to work with?

S: There is a long list of very talented people that I would love to collaborate with. Essentially people that are not afraid to think forward, step outside the norm, cross boundaries, and experiment with different styles and sounds. There are people I have looked up to for decades and the idea of working with them would be a thrill, but there are many undiscovered yet immensely talented people that I can’t wait to share my creativity with. Time will tell!

f: What are your Top 5 weapons that always smash the dancefloor?

S: There are a number of projects on the go. Firstly, I have upcoming songs with Tracy Hamlin, Laura Jackson and Unqle Chriz that are pending release. Secondly, I have some releases that express the darker and edgier side of my musical expression remixed by Saint Evo, Echo Deep, Eltonnick and HyperSOUL-X. Finally, I am currently working on songs with Sulene Fleming, Dee Lavender and AJ Lewis. I’m really excited about all of these collaborations!

1 thought on “Getting To Know… Stoim”