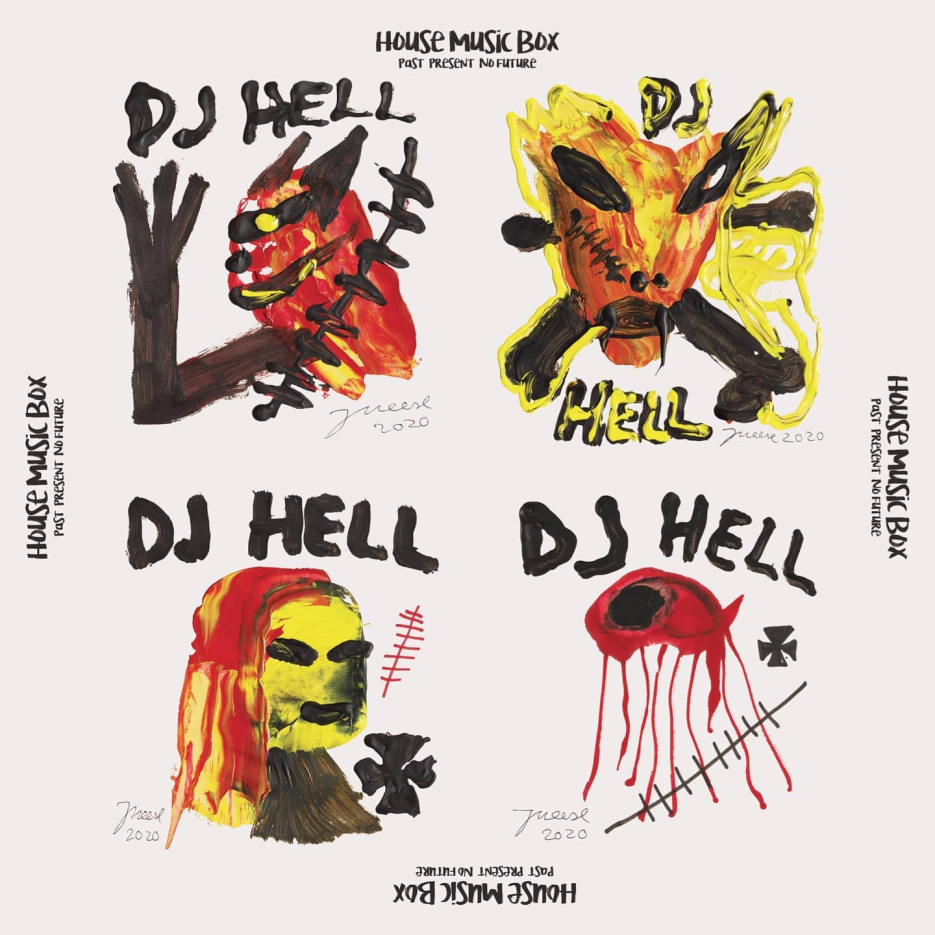 People, listen to the signals: when the club life is reawakening, DJ Hell returns with the album House Music Box (Past, Present, No Future).
In contrast to its predecessor album Zukunftsmusik (2017), with his new work, Hell looks back to the glorious early days of House and Techno in Chicago, Detroit and New York City.
Obvious references are the heroes that vibrated the dancefloor from the late 80s, i.e. luminaries like Ron Hardy, Frankie Knuckles and Lil’ Louis from the Chicago house scene, or the legendary radio shows of The Electrifying Mojo from Detroit. Not to be forgotten are, of course, the NYC House of Larry Levan or the Nu Groove records from the early 90s – all of them served as musical godfathers for Hell’s House Music Box.

Back to the roots. In line with this, Hell’s opus number six emerged as a classic album: House Music Box simply comprises eight gripping new bangers from the groove manufacturer that is the super gigolo Hell. The record is not only a concept album about the beginnings of electronic DJ and club music but also a danceable history lesson. Exemplifying that is already the superb first single: ‘Out of Control’ is a mightily stomping dancefloor monster where a killer bassline and an infectious synth riff meet. A vocal sample rightly demands ‘Don’t stop!’, because the magic that Hell created with his controllers leaves one in pure ecstasy of happiness.

The songs ‘Freakshow’ and ‘House Music’ are a musical bow for the innovative originators of house in the windy city. On ‘Freakshow’, the vocoder vocals ‘Ron Hardy is the true creator of house music’ recall the prematurely deceased DJ who was best known for his eclectic sets and radical edits. Hardy used to deejay in what was the successor of the Warehouse, the legendary ‘Music Box’ club, eponymous for the new album. On ‘House Music’, nomen est omen naturally applies: over the flawless house from the quality brand of Hell, he loops various samples, fragments of sentences such as ‘Acid comes from house music’, ‘Techno comes from house’, ‘Foundation of house music is’, or ‘Chicago house music’. Through their persistent repetition plus grooving beats, a hypnotic effect soon arrives, so that the music – thanks to the magic production of Hell – starts to speak.

Get your 2×12″ Crystal Clear Vinyl at deejay.de

On ‘Electrifying Mojo’, on the other hand, Hell honours the visionary and enigmatic Charles Johnson a.k.a. The Electrifying Mojo, whose radio show (airing from 1977 until the mid-80s) had a substantial influence on the development of techno in Detroit. As he frequently played Kraftwerk, for instance, the publicly shy Electrifying Mojo emerged as a key facilitator of future electronic music in the spirit of the Detroit-Dusseldorf axis.

Almost self-evidently, Kraftwerk – the grey eminence of German electronic music – shaped the background of Hell’s new record too, via the usage of vocoder vocals as a rhythmic element or the bass frequencies as the carrying foundation for each track. Clearly recognizable is the influence of Kraftwerk’s 1986 work Electric Café (now: Techno Pop) on the groovy track ‘Tonstrom’. Fans of the ‘industrial folk music’ will hardly be surprised, as this was Kraftwerk’s working title for the record. Along with sound poetic vocals, Hell tickles a cool funk from the warm machine sounds over nimble bass lines, as on House Music Box he uses – not only for this track – the same analogue synths from the seventies as Kraftwerk once did.

The oeuvre of DJ Hell is famously characterised by his artistic desire to have a different approach to each album, while at the same time constants provide inner cohesiveness and cross-references. One example would be the theme of automobiles, as an influence of Kraftwerk’s ‘Autobahn’: just think of songs like ‘Hellracer’ or ‘Car Car Car’. The car motive is again present on House Music Box, with the ambitious track ‘GPS’. Conceptually speaking it is a highlight of the record: over sparse Roland drum machine beats, we can hear the female computer voice of a navigation device devising the fastest route to ‘destination Berlin nightlife’. This almost has a double meaning, as once inside the club, the music will guide the dancers.

No DJ Hell album, without cover versions. Or, should we better call his idiosyncratic electronic editions of established hits new originals – referring to a term that Laibach coined. This definitely holds true for ‘The Revolution Will Not Be Televised’: his update of Gil Scott Heron’s soul classic turned into a veritable 4-on-the-floor version. The slogan, which originally came from the Black Power movement, carved out a remarkable career, not only thanks to several new versions but equally alienated as an advertising slogan for bar chains. The fact that Hell takes up this track in the days of YouTube, Instagram and Facebook illustrate us today that the idea of a political revolution is long gone. For that reason, all he keeps from the wordy original is its headline while the impulsive beats prove all more, that at least the revolution of the dancefloor is nowhere near over.

Past, Present, No Future – even if Hell’s deep bow to the trailblazers and pioneers of electronic club music was already completed when the corona pandemic broke out, the subtitle of House Music Box proved apt even so in the light of the circumstance that especially the club scene is seriously affected from the coercive measures of the crisis. It was therefore quite prophetic that on ‘Jimi Hendrix’ you can hear pieces of the last interview that the guitarist gave shortly before his controversial death.

„I can’t build anything right now, you know, because of the things that are happing right now. I just have to lay back and think about it all.”

House Music Box is, in many ways, the right record at the right time. Because as DJ Hell speaks about his album:

“House Music for me has always been a spiritual experience, a higher, different form of communication, so to speak.”

So, let’s listen carefully what he reports about his musical excursions in the Past, Present and Future of House.