The Plausible Future of Cinema Soundtracks – Interview with Egopusher 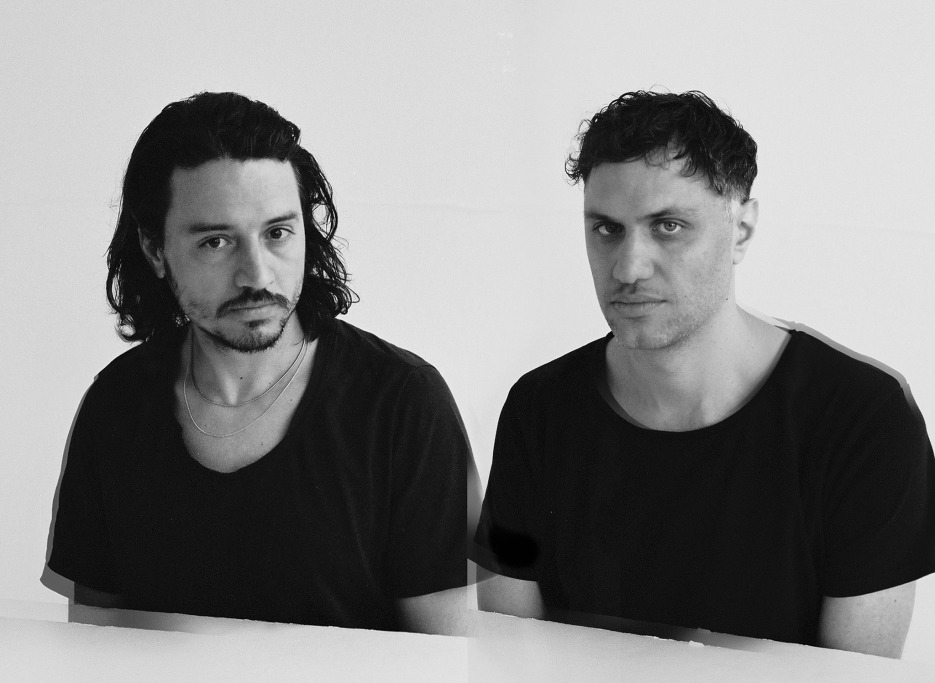 Experimental electronic music, by virtue of concerning itself with sculpting space and distributing tensions rather than emphasising top melody and sticking to a classic song structure, tends to works really well in a motion picture context. In the last few years, there was a noticeable shift in the cinema world, away from the pompous orchestral approach towards all sorts of left of field electronica. The most obvious example of this and a milestone was the Oneohtrix Point Never score for the Safdie brother’s indie juggernaut Uncut Gems.

Egopusher is a couple of Swiss musicians that came up together while playing in Dieter Meier’s Out of Chaos project. They are drummer Alessandro Giannelli and violin player Tobias Preisig. Although they are masters of their instruments, they also love to fiddle around with synths and sound design. Their music combines a certain typo sweeping gusto, the type that can be found in 20th Century classical music, with a late 70s arpeggio-driven electronica. This peculiar fusion of elements really makes for a style that would easily translate on the silver screen. Their records are soundtracks to imaginary movies. That’s the concept.  Beyond, their recent release on Quiet Love Records takes this idea literally and pushes it to its limit. The record is a tribute to vintage sci-fi soundtracks of the 60s and 70s, and it’s wonderful!

Oro Del Mac: Is it true that Egopusher comes from the Yello lineage?

Tobias: We both played in Dieter Meier’s – he’s the voice of Yello – a band called „Out of Chaos“.

While driving to the shows together, we got to know each other and started to exchange music, compare our different universes. Eventually, we decided to meet on a regular basis at the studio, and create music together. Just to see what would happen, without any pressure or a plan. This was the beginning of Egopusher.

ODM: If you had only one song to introduce someone to your sound, which song would that be? And why?

Alessandro: That could be Patrol. It sums up our music well. It’s danceable, cinematic and the melody has a very catchy and dreamy vibe. Patrol was created at a soundcheck, back in 2015, when we recorded our first EP – in the French mountains.

I was playing around on my synth and turned on the arpeggio, I let run in a loop it and played some beat along to it. Tobias jumped right in and improvised that catchy melody and played the bass on it. We developed it some more in the next few sessions and created the whole song out of it. This is a typical example of our creative process. It starts with a spontaneous idea that has a magical vibe, and then we tweak it for months and eventually turn it into a proper song.

ODM: You are a part of an expanding Swiss Electronica scene, tell us a bit about that. Who are some of your favourite musicians/colleagues?

Tobias: That’s true, there is a lot going on in Switzerland musically, at the moment. We love the songs from electronica duo Diskret and the music of producer and DJ Jimi Jules. There is also Wolfman, Namaka or Verveine.

ODM: Where did the idea for writing a record as a soundtrack to an imaginary science fiction movie come from?

Alessandro: It happened naturally. Many people approach us and ask if we are making music for films. Our music seems to be able to evoke pictures, and since Tarantino and Sofia Coppola haven’t called us yet, we started to create the soundtrack for their future films.

ODM: What is Beyond about?

Tobias: Beyond is about the unknown, the unexpected, It’s what’s hiding beyond the foreseeable future.

ODM: What was the hardest thing in creating this record?

Tobias: Time and organisation, I guess. We’ve been touring intensely – recording, producing, preparing and organising everything, at the same time. Scoping out time to put our attention into this, for a longer period of time was a challenging task. Because of this, the current situation with the lockdown was almost helpful. It helped us carefully launch our release with our label Quiet Love Records.

Alessandro: The moment when we give our demos to our producer David Hofmann. It’s the hardest and the most interesting part. He either turns everything upside-down, or he adds just a tiny twist to make the songs stronger. Sometimes, this process is extremely tiring, but there are also times when it’s uplifting as well. Regardless, he always brings the music to the next level.

ODM: What does the near future hold for the two of you?

Tobias: Our release tour was postponed many times over. Fortunately, we could already play a few shows with this material. We’ve been working very hard with our sound technician Tobias Stritt and our light technician Jan Humbel to put this new show together, and hopefully, we can share it with a real audience soon. In the meantime, we will take this opportunity and explore other ways to share our music, and get into an active exchange with our audience.