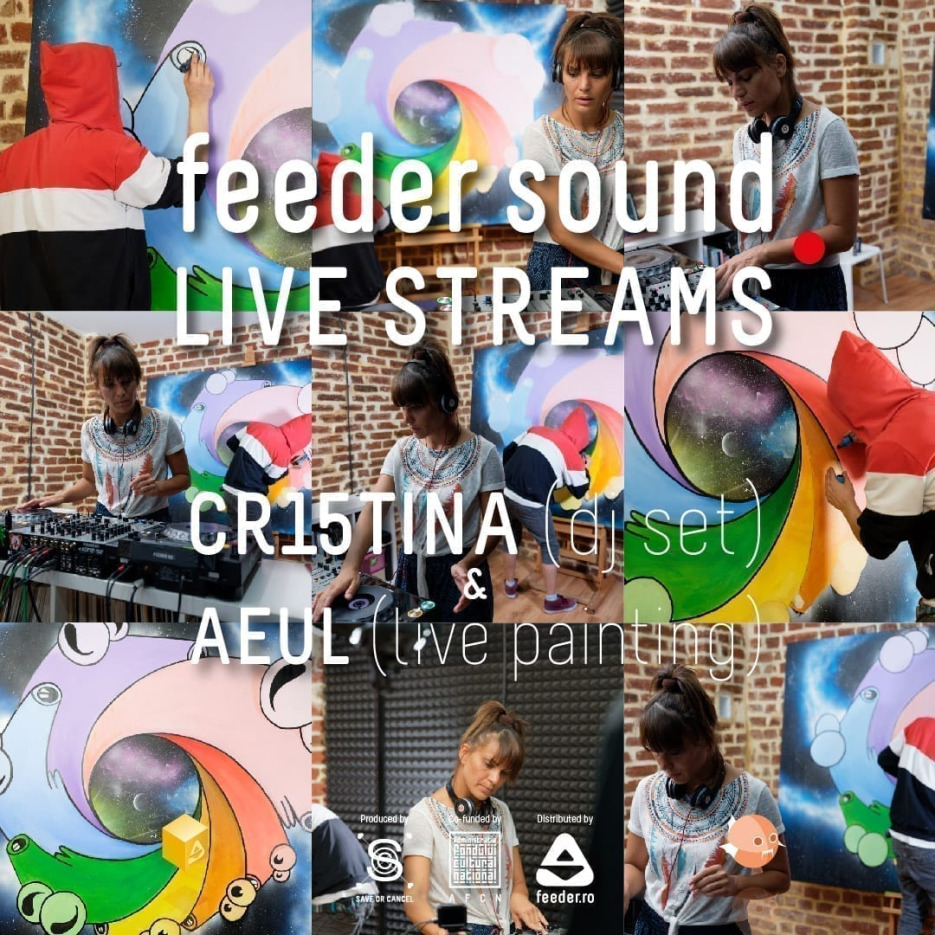 Feed your curiosity for underground culture, music and graffiti with this two hours long video, unveiling the mysterious and secret techniques that Cr15tina & Aeul are using to create a new piece of art.

Combining the skills of two artists from different fields, the performance brings you a better understanding of the process involved in creating a large canvas and a dj set. CR15TINA invested a lot of energy into this set, composing the entire journey using only her musical productions. The omnipresent graffiti artist, AEUL, manages to bring his characters into the large canvas, depicting a flight throughout the universe, discovering and experiencing interesting phenomena like time-space, colours, vibrations and the rainbow.

For two hours you are invited to explore a multidisciplinary performance and find out more about your favourite local artists.

“Hello everyone. I want to thank the feeder.ro team for the invitation and those who followed us. It was a very pleasant experience. The environment was very relaxing, and a warm welcome. I can say that because at one point I took off my shoes and mixed like that. I was at home. And I was very happy because I managed to play in two hours a mixed mix of my creations. Aeul is also a very talented artist and I found myself in the drawing from the painted space, drawn by him. I will return with an open heart to your studio, when we collaborate. Until then, all the best and let’s stay with the souls tuned to the magical vibration of music. Kisses.” – CR15TINA 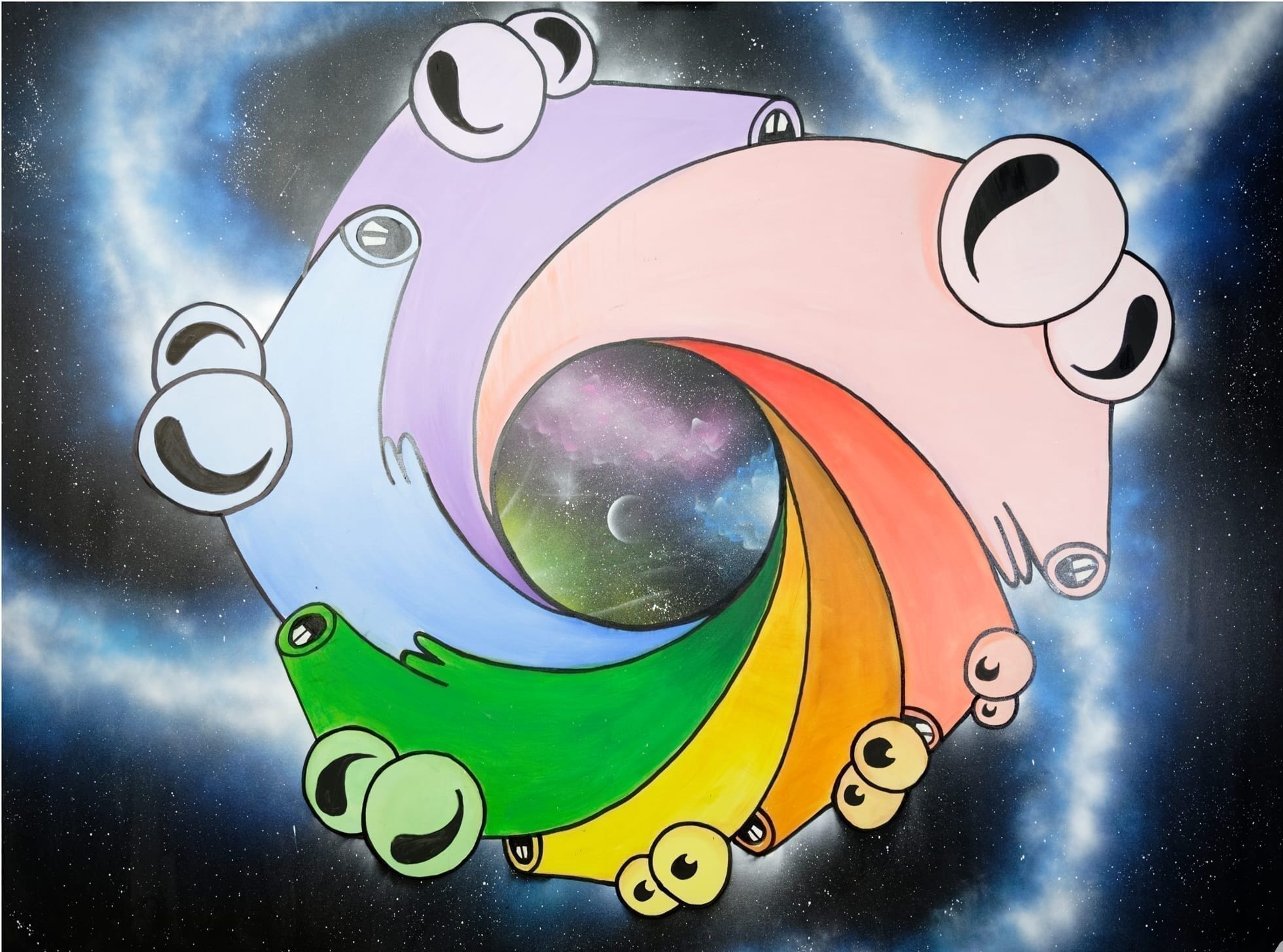 “An infinitely circled road, the evolution of states (moods/feelings) and dreams in the spiral of time floating through space” – AEUL

Born in the lovely port town 2 Mai by the Black Sea shore, Cr15tina was used to electronic music since childhood since her father was active in this field. She made her first contact with the players at the age of 14 and shortly after she started playing at a local summer club. During that time she also graduated from a singing school.

Her first official gig was at the Zebra Club in Bacau, where many artists who left their mark on the Romanian underground scene have started their careers. In 2006 she moves to Bucharest and expands her DJ activity here. She acquires 12 years of experience, playing in a lot of clubs and being resident at Silver Afterhours, with the first 3 years being the most active ones.

After staying in the shadows for a while Cristina returns, flirting with music production and showcasing her own sound, full of emotion and happiness. In December 2016 she collaborates with Arms Limited for the release of her first EP “Zbor Maiastru” and in September 2017 Cisne Negro Records from Chile dispatches “Love Dimension”. In that period she also becomes a part of the highsounds.ro team, a local agency that promotes DJs and music producers alike.

She says that music means Evolution, Knowledge and Love.

It’s impossible not to spot one of AEUL‘s intriguing pig-dog like creatures while talking a walk around Bucharest, Brasov, Vama-Veche and probably other cities around the country as well. The minimalistic and funny design, as it may seem at a first glance, actually gets to stand as a key-symbol for the expressivity brought forward by the local graffiti movement. The character was always there, in the subconscious mind of the artist, until one day “it decided to break free and like any other creature it felt the need to multiply”. The author is “more or less an instrument, a decorator of the universe”. Hundreds of piggy-dogs appear and disappear ever since all the time!

During the recent lockdown, AEUL continued his work, introducing the character on canvas, with three works now available in the feeder shop. He also contributed to the package of drawings submitted by various visual artists as an invitation for everyone to add colour to their works in order to express their own vision and connect through the online medium during the harsh social distancing measures taken by the authorities during the first stages of the pandemic here in Romania.

You can find some live locations of the piggy-dog by exploring the Un-hidden Romania Map and also enjoy them as published in the Un-hidden Street Art in Romania Book, which can greatly help you to discover independent art in public spaces and guide you around!

Here you can discover the previous episodes which had as guests Teluric & Maria Bălan // Kozo & Irlo // Miss I & Pasr and the complete feeder sound LIVE STREAMS line up, time table and information to feed your appetite for underground music and art.