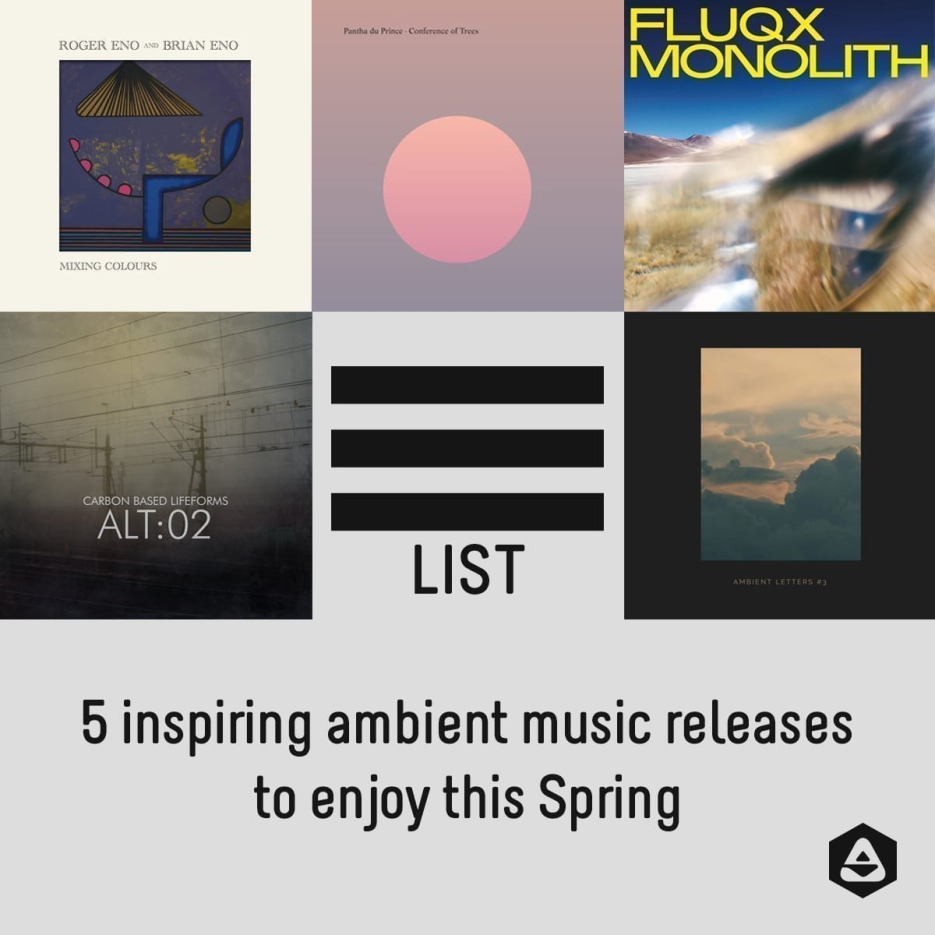 As the warmth of the Sun slowly reaches the Northern Hemisphere and nature comes back to life after a dry winter here in Romania, we sat down for a coffee this morning, and, bewitched by the bright rays, the bird’s trills and the flowers that rise from the ground, we hit the play button on 5 ambient music albums in order to relax and enjoy LIFE!

Ambient music has always proved to be the best way to take a step back from every day’s buzz and fall into a deep and colourful daydream, relaxing your mind, spirit and body. Bringing forward vivid thoughts and ideas of rebirth and rejuvenation, Spring has always been seen as a source of inspiration for many, especially for ambient music makers who tune in to its frequencies. Taking those two statements into consideration, the combination between them seems to conjure up something inevitable, and that being downtempo music carefully crafted to explore that specific state of mind. With the vernal equinox to happen on the 20th of March, nature’s regrowth feels to be celebrated by us tapping to its energies and ride the sinewaves!

▶ Here’s a list of 5 inspiring ambient music releases to enjoy this Spring (in random order):

The legendary Eno brothers team up once again for another extraordinary piece of ambient music, this time taking the credit just for the two of them, as the recording process started as an exchange of sounds between the two since 2005. Well-known for their collaborative work on David Lynch’s Dune as well as Apollo soundtracks, both artists have a rich discographic history under their belt, with numerous co-productions, albums and film scores released over the years.

Spread across 18 tracks titled after colour hues, “Mixing Colours“ reveals deep introspective soundscapes elegantly crafted with immersive keyboard layers to which musician and software designer Peter Chilvers adds a series of short slow-moving videos to accompany the LP. Just like abstract paintings, the music flows into organic shapes, a fact which can be understood just by looking at Dom Theobald‘s artwork. The release date is set for March 20.

“What does it sound like when trees communicate?“. Starting with this question, the artist envisioned a multilayered language of rhythms and sounds, where homemade wooden percussion, wind chimes, bells, xylophone notes and carefully tuned synth textures engage into a lively dialogue, exploring this mysterious perspective. The tracks flow with ease, ranging from spacious emotional journeys into more intense, drum-infused compositions to finally return to the calmness from the beginning.

Copenhagen-based duo Joel Krozer and Brian Della Valle aka Fluqx present their debut album “Monolith“ with German imprint HFN Music, known for its collaborations with Kasper Bjørke, Trentemøller, Darkness Falls, Reptile Youth and Null + Void, amongst others. Available from March 6, the LP unfolds 12 tracks designed with a versatile range of sounds and atmospheres that capture the feeling of finding something long lost or discovering something unseen in vast open spaces.

From warped synthesizers, swirling textures and touching vocals to crunchy drumming and solid drones, the album has it all, sublimely merged together in order to offer a deep experience. Started as a series of late-night recording sessions, the concept evolved rapidly as inspiration poured in, manifesting as true sonic landscapes you don’t want to miss out.

On the 9th of March, Daniel Vadestrid and Johannes Hedberg revealed “ALT:02“, the duo’s most recent compilation of live recordings, remastered and revisited tracks. Among the 11 pieces dispatched through Sync24’s Leftfield Records you can also find a new track and a fresh remix for “Lemming Leisures” by Kurbeats, previously known as Yggdrasil. The selection also includes edits of “Supersede”, “Vision” and “Dreamshore Forest”.

The material swings from deep electronic drones to psybient and strong progressive vibrations delivering a perfectly calibrated harmony throughout. CBL have stood out in the field of modern electronic music since the early 2000s and the concept behind the album’s title follows the theme of “ALT:01”, released back in 2016. It’s really nice to hear some classics sound better or slightly different sometimes, so this LP is definitely welcome!

Specialized in ambient and downtempo music, the sublabel of the Spanish imprint Seven Villas Music presents its third volume of the Ambient Letters series featuring 11 tracks that can easily make you daydream and truly enjoy quiet moments. The artists on the VA manage to capture blissful moments suspended in time, showcasing their unique approach to writing atmospheric music.

The compilation slowly sets in with recordings of mountain birds chirping over vast, low-volume background textures, only to evolve into rhythmic melodies where the piano notes, warm pads and ascending energies of the tracks create a spiralling sensation. The pattern ends with a drifting, grainy cluster of tones and reverberated layers that reflect a peaceful feeling, perfect to start the day with!

If you feel inspired by this list or want to add to it, let us know. Share your thoughts in the comments! 🔮