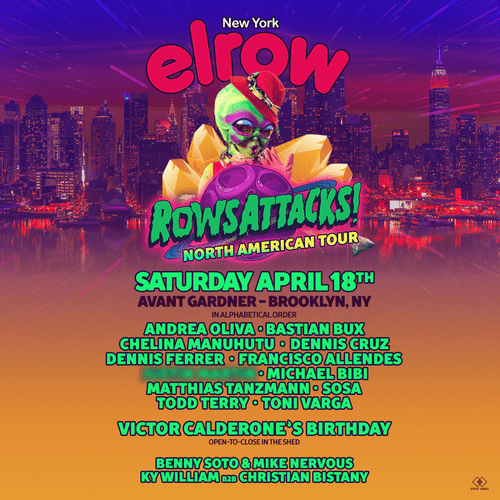 After an incredible 2019 with back to back sold out shows at Avant Gardner, #1 global roaming event brand elrow announces their lineup for RowsAttacks!, their first NYC residency of 2020 as part of their five city North American tour, offering a mothership worth of a party. Returning to the famed and acclaimed Avant Gardner on April 18th, RowsAttacks! will offer three stages to blast off to and is preparing an otherworldly space for elrow revelers to explore and inhabit. The event’s theme is a classic take and call back to the absurdism of 1950’s pop sci-fi culture.

For the lineup, all aliens in attendance will be spoiled with an epic open-to-close marathon birthday set from New York’s legendary house DJ, Victor Calderone. Victor will be DJing in “The Shed” a warehouse that will be converted into another world solely for this event and is sure to be a spectacle in true elrow fashion. With “The Shed” located right across the street from Mirage, fans will be able to spacewalk back and forth with ease. “It’s been a great pleasure and honor to continue to work with the Elrow brand,” says Victor. “ I’m really excited for the upcoming NYC show where I’ll be celebrating my birthday with an open to close set.” Firmly at the top among the world’s most prolific DJs and producers, Victor’s birthday bash will be a multisensory extravaganza featuring elrow’s signature mix of far-out performers and space age art installations.

Along with Calderone, music history maker, mover, and booty shaker Todd “Todd The God” Terry will be “housing” attendees all night long with one of his infamous classic house sets. “Can’t wait to bring my house classics set to Elrow for my Mirage debut in my hometown of Brooklyn,” says Todd. “I played elrow Festival in Tenerife over the summer and was blown away by the production level!”

In addition to these two heavyweights, a bevvy of global artists will be making the intergalactic journey to NYC: from Chile, Francisco Allendes; The Netherlands, Chelina Manuhutu; and UK’s Michael Bibi who will be making his New York debut plus many of New York’s own. One would be hard pressed to find a more diverse lineup anywhere in the world.

RowsAttacks! is one of the must attend events for the modern party goer who should be prepared for the most iconic theme to date from elrow. It’s the most anticipated theme that North American fans have been asking for. Michael Julian, Head of elrow North America adds, “People always told me that I must be from outer space so can’t wait to put my Martian suit on and party with all the other aliens!”

As one of the most sought after experiential events in the world, elrow’s strength comes from its reputation, with NPR calling it, ‘the leading adult clubbing brand’. Since its 2016 U.S. debut in NYC which attracted 800 attendees, elrow has steadily expanded its footprint in the United States, growing in notoriety and reputation. It now attracts more than 5,000 revelers per show as it heads into its fifth year of its New York residency. The New York Times gave praise, calling it an “art and music extravaganza … a roaming celebration that is part Cirque du Soleil, part Alice In Wonderland.” elrow hosts the globe’s craziest parties to attend right now with North American residencies in New York and Las Vegas. 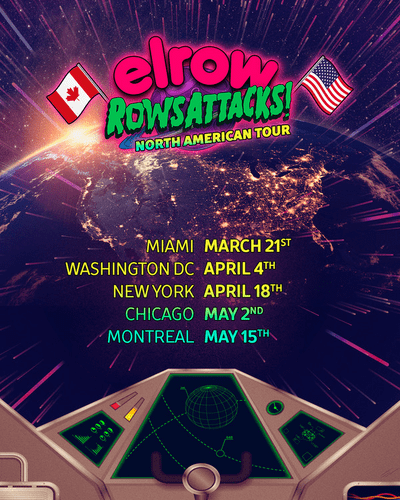 Media Praise From:
“The Médicis of raving” -THE GUARDIAN
“An immersive, multi-sensory experience for thousands of people.” -NEW YORK TIMES
“A Worldwide sensation… arguably one of the most popular global parties currently.” -FORBES
“A themed ‘happening’ … a premium on the entire clubbing experience.” -VARIETY
“One of the most successful and outlandish party brands around the world.” -BILLBOARD
“Legendary” -MIXMAG
“The world’s most popular clubbing brand.” -RESIDENT ADVISOR
“A Colorful, Musical Circus” -BIZBASH

About elrow:
elrow was conceived in 2010 by Cruz and Juan Arnau, the sixth generation of entrepreneurs of the Arnau Family, who also founded the Monegros Festival and the legendary Club Florida 135 in Fraga, Aragón. In 2017, elrow entered into an investment and partnership agreement with Superstruct Entertainment, a live entertainment platform backed by Providence Equity Partners. elrow is the umbrella brand of a series of fully immersive, themed shows, which have become a global point of reference in the field of circus-inspired parties thanks to its perfect mix of the best electronic music with unimaginable scenarios, frenzied performances and outlandish characters.

Hailed as the number one party in Ibiza, elrow also holds lauded residencies in Madrid, London, Dubai and Amsterdam. Additionally, the mighty elrowTown traveling festival has expanded to four cities, including Antwerp, Amsterdam, Edinburgh and London throughout 2019. elrow has consistently broken attendance records with over 2 million people attending 134 shows hosted across 65 cities in 33 international territories.

elrow has taken the world by storm with the wildest and most hilariously over-the-top environments at their shows, a huge factor in their meteoric growth from a small Spanish party headquartered in Barcelona to a global entertainment powerhouse that’s now won over 80 cities in 6 continents with worldwide residencies.