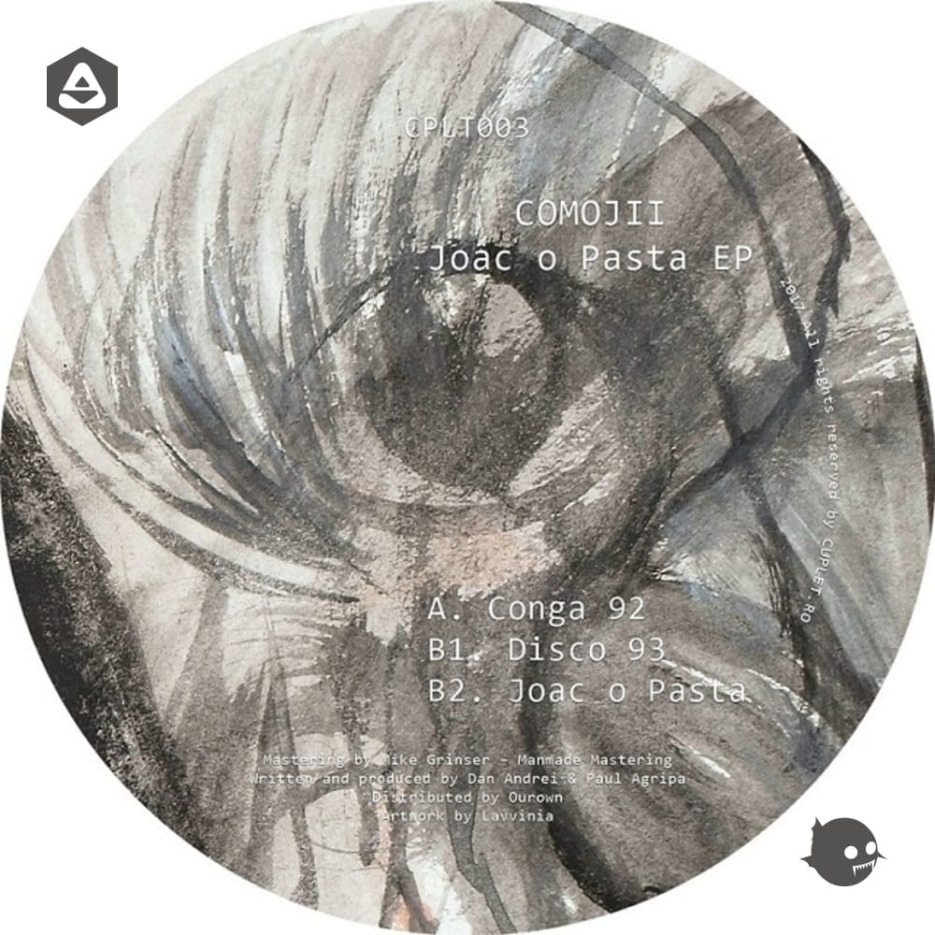 In 2017 Bucharest-based record label Cuplet released “Joac O Pasta EP” marking the third instalment in their catalogue as well as the first pressing delivered by Dan Andrei and Paul Agripa under their Comojii alias. The 12” was recorded during long jam sessions when both artists experimented with rhythms and sounds, letting their rich imagination go wild in the studio. This approach makes the record stand out, as the distinct nature of the music brought forward is flavoured with raging synth-pop sequences, acidic elements and electric broken beats.

Dan Andrei is well-known for his intense activity in the scene, as well as for his releases with Be Chosen, Kurbits Records, [a:rpia:r] and Amphia. His discography also includes remixes for Raresh, Priku, Benjamin Stager, Rainer and Vlad Radu, while other materials were published under various monikers, like Aloe Văru or AK41 alongside Serban Goanta aka Kozo and Sahau, with Paul Agripa joining the two.

Paul Agripa is yet another important name on both local and international scenes, collaborating with imprints like Subtil, miNIMMAl movement and Zimbru. His skills as a selector delighted a lot of people on dancefloors in Sibiu, Bucharest, Timisoara, Cluj-Napoca, Berlin, London as well as at major festivals like Waha and Sunwaves. Together with Lumieux he forms Ragrip, a project that delivered numerous performances and “Alla Prima” EP dropped on Uvar in 2017.

💥 Time to explore the duo’s EP in more depth and get down with B1. “Disco 93” exclusively on feeder sound:

The track reveals an ever-evolving composition infused with breakbeat percussive elements, deep background textures, technoid patterns and swirling synth arrangements. With the tempo set at around 132 bpm, expect an uplifting piece perfect for peak time eclectic selections as well as for true raves, as there’s a sophisticated old-school feeling embedded into it.

On Side A we find “Conga 92”, a peculiar experimental rhythm that is hard to categorise under a specific genre as it draws influence from glitch, IDM and acid. Here, the filtered layers and slightly dissonant harmonics offer an eerie journey backed up by a minimalistic percussive core. Closing the B-Side, “Joac O Pasta” provides a techy sound powered by reverberating notes and acidic inserts that flow elegantly over the broken beat. To add contrast, from time to time you can hear bright pads that help with changing the whole direction of the sound. Expect the unexpected with this uniquely designed EP.

Grab your copy of Joac O Pasta EP at deejay.de while it’s still in stock.

Explore our 22 party recommendations for the 2020 NYE and see where you can catch Dan Andrei or Paul Agripa perform! Have fun! ✨🎉🎈