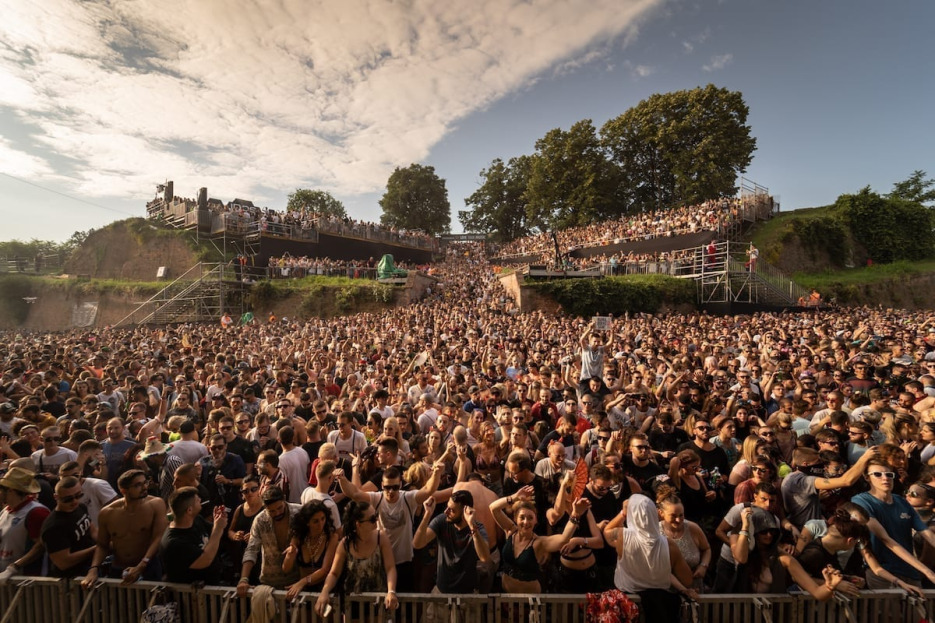 EXIT truly is a festival like no other in Europe, and very possibly the world. Spread over 4 nights (the action pretty much kicks off around midnight on the dance stages each evening), it tends to wind down around 10 am — meaning stages such as the No Sleep Novi Sad stage are nothing if not expertly named! While outside of the dance areas the music was also spot on (Skepta and The Cure especially delivered some absolutely virtuoso performances), as electronic music connoisseurs we dedicated most of out time to all things 4/4. And it’s fair to say that every one of them delivered in spades. We’re pretty exhausted afterwards, but wow — it’s fair to say we had a blast from beginning to end and will definitely be making the pilgrimage to Serbia again next year.

Entering the Dance Arena on Thursday for the first time, one is immediately inspired by the sheer scale of the place. Held on the grounds of an old fortress, it is undoubtedly one of the best outdoor arenas in electronic music — and a pity that EXIT only rolls around each year! On that note, the DJs are all astutely picked. Day 1 featured incredible performances from the likes of Charlotte de Witte and Monika Kruse, but the Thursday undoubtedly belonged to Maceo Plex and Carl Cox. Not only did both of them deliver in there own right, but sparks really flew when they played b2b. A set for of titanic techno hat set the wheels in motion for the weekend ahead, it got the festival off to a real head start and proved to be an iconic pairing. Oh yes, oh yes!

Sleep is a valuable commodity at EXIT, so we trudged off home that morning in the early hours, knowing full well we’d be back at the Dance Arena soon. On Friday however, we divided our time between the No Sleep stage and the Dance Arena, where on the No Sleep stage the Italian Giorgia Angiuli delivered a killer live set of progressive techno, complete with her luscious vocals. A lady definitely on the rise, she’s certainly one to watch out for over the coming year. Back at the Dance Arena, Paul Kalkbrenner proved he’s still a massive draw with a live set that showcases his own diversity. The masked German Boris Brejcha then closed things with a slamming tech house set that again proved he’s a man for the big occasion.

If Maceo Plex and Carl Cox’s b2b was our favourite of the weekend, then day 3 definitely came close. Adriatique kicked things off, and though their set took a while to gain momentum, they had the crowd in the palm of their hand by the time they dropped Push’s Universal Nation. A track that was greeted to much acclaim, it’s further proof of the renaissance of string-heavy, trance-tinged techno. On the No Sleep stage, the Bassiani lot impressed with their unruly brand of heavy techno, while Solomun and Tale of Us went toe-to-toe for the closing slot. An epic performance that drew arguably the biggest crowd to the No Sleep stage of the whole weekend, it featured tracks by numerous Afterlife and Diynamic affiliates and proved again that these boys know well how to play together.

Strolling into Day 4, we knew immediately that EXIT wasn’t going to go out with a whimper when Jeff Mills played ‘The Bells’ early on in his set. As ever, Mills’ time behind the decks was laden with atmosphere — and the same can certainly be said for British DJ Dax J, whose no-compromise sound wonderfully complemented everything that had come before. Seeing us out was Belgian DJ Amelie Lens, who demonstrated once more that she’s now very comfortable playing to massive crowds. Closing with The Prodigy’s Firestarter, it was an epic way to round off an epic few days. Roll on EXIT 2020!