Oh, lovely appearance of death,
No sight upon earth is so fair;
Not all the gay pageants that breathe,
Can with a dead body compare.
– Charles Wesley, A Funeral Hymn for a Believer, 1780

Long drawn to utopian musical traditions, Sollmann took inspiration for New Atlantis from Francis Bacon’s unfinished 17th century novel of the same name, which describes a fictional island devoted to social progress through the synthesis of art, science, technology and fashion. In the story, Bacon imagines futuristic ‘sound houses’, which contain musical instruments capable of recreating the entirety of the sounds of the universe; a 400-year-old prophesy of today’s digital sonic reality.

Through Sollmann’s lens, Bacon’s vision ebbs and flows over 50 minutes in varying speeds and colors, emerging as a tapestry of different utopian musical traditions – through billowing synth lines, early Detroit techno, resonant wooden percussion, trance, droning organs, dulcimer, electric guitars, hurdy-gurdy, just intonation, poetry, hymns and murmuring voices. Sometimes they merge into epic, rhythmic journeys like the 14-minute long title track; other times they appear as a briefly open sound portal (“Temple”), or in the forlorn human voice on “Oh, Lovely Appearance Of Death”, calling to be freed from jail of the human body and pass into the afterlife.

Like previous Efdemin albums on Dial, New Atlantis veers off the techno path to explore other musical territory. Here however, Sollmann occasionally abandons the club entirely, returning only to push its boundaries with other instruments, mythologies and psychedelic story telling.

Hear Efdemin play in Control on 27th of April 2019, hosted by Maschine. 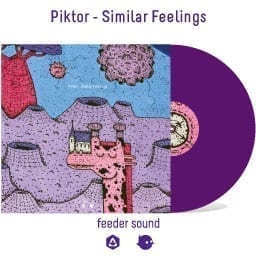 under the tree w/ Amorf, Sublee and Emi ∫ @ Supermarket