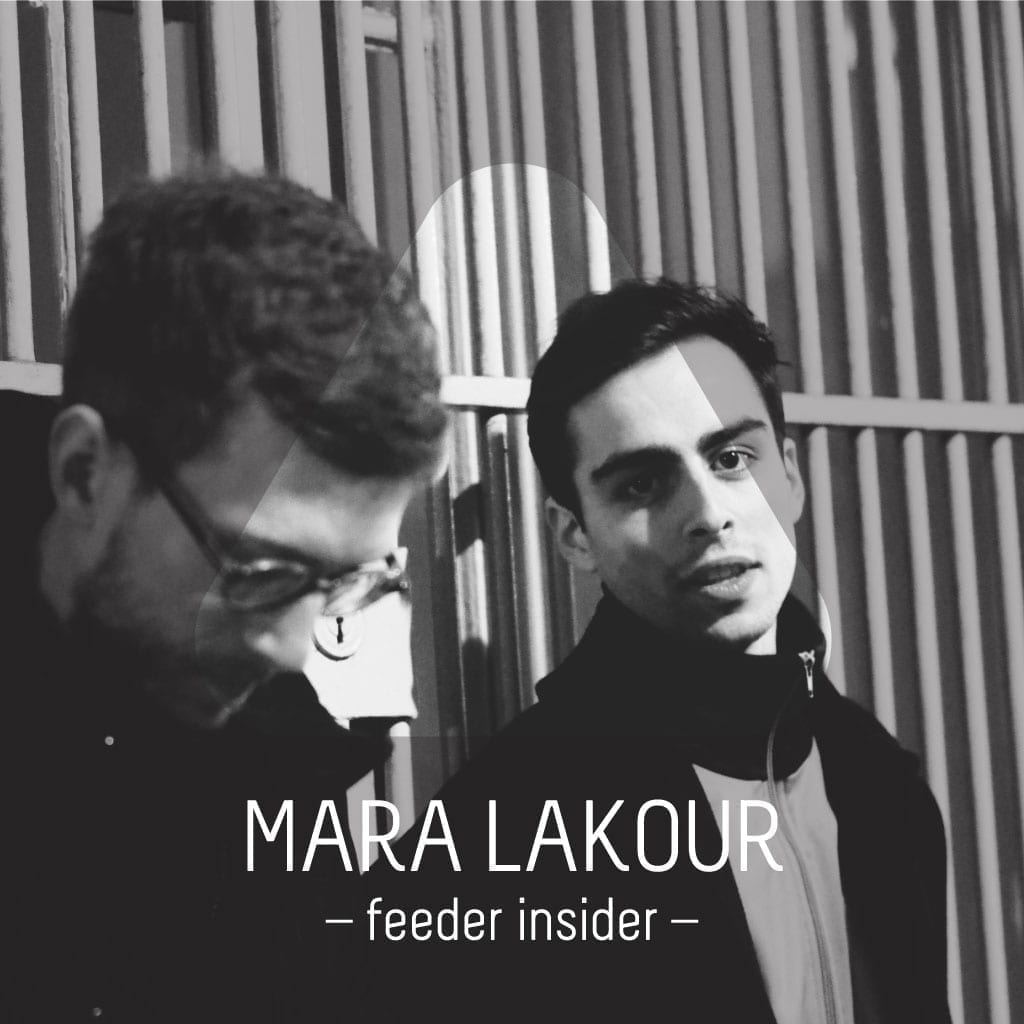 Already described as the deepest duo on French West Coast, Mara Lakour is riding a prolific wave of music production. Already charming the scene with their contemporary sonority of “sexy late-night deepness”, they are a promising deep wind of change in the club and in the studio. To dive directly in their Paris-based deep universe, hit Club Control on October 12 for another “soirée dansante” recommended by Odotte.

Paris during fall is… naked.
Home is where… decks are.
The best club we have ever been was… Club Der Visionaere, not so underground but love the vibe.
Among Paris, Nantes and Nancy, we choose … Paris city zoo.
Without the deep house, club music would be… sad.
The sound always reminding us of teen years… Grand puba – I like it.
Our favourite French dessert is… le fraisier sur sablé.
If Mara Lakour was a girl, she would love… be treated like every woman deserve to be treated god damn! Like a princess.
It’s always fun for us to… play to the video game Worms 3D (1vs1). Competition between us.

f: Your sound is going deeper and deeper as you were declared the deepest duo on French West by Trax Magazine. What surprises should we expect in the next EP you are working on?
Mara Lakour: Haha, That was flattering but we didn’t release enough record and prove enough thing to win this title of the deepest duo on French west.
We don t think there will be a surprise. Our work is in a continuity of what we listen at the moment, what we play in a club.

f: Your production is exploring a futuristic sound while keeping an old-school dance and house vibe. Why did you settle to this combo and what is your next move sonically wise?
Mara Lakour: This combo was mostly on the first EP and the track Barbès. In generally our inspiration has evolved, our musical taste has evolved so you can’t be stuck in what you did before. Change the kind of music we produce is essential for us.

We do it naturally.

f: On October 12th, you are bringing your deep sound collection to Club Control. How are you preparing for your first trip to Bucharest and for the local vivid clubbing crowd?
Mara Lakour: This will be the second gig outside French territory so it will be an important gig for us. The keyword is to “break the club down“. We want to give something special to the Romanian crowd. We know it’s an educated crowd, musically speaking.

f: Why do you feel more and more electro-enthusiasts turn to a deep house? What is so special about this sound and how did you get in touch with it for the first time?
Mara Lakour: We don’t know if people are more enthusiasts about the deep house but if they are it’s fantastic for the movement. We’ve been touch for the first time thanks to our friend Manu Doussard. He really liked to play Lovebirds – Keep coming. It was the beginning of our love for the deep house. We think this track is a typical example of what is a deep house.

f: Your music was highly appreciated by Jeremy Underground and generally by French club scene. Who would you consider a consistent local inspiration for Mara Lakour’s sound as we know and love it today?
Mara Lakour: Gunnter, Dj Steaw, Janeret. We know those guys in recent times but they give us the strength and the inspiration to produce again. It’s a bunch of lovely dude

f: Feeder turns 14 this year as main alternative Romania’s news agency. What is your message for our community of loyal readers, supporting us for almost a decade and a half?
Mara Lakour: Wow 14 years! that’s huge. First of all congratulations to the agency and the community to keep Bucharest alive and secondly:

f: If you had to release a 2018 club compilation, what 5 artists would you curate?
Mara Lakour: Michael James // S.A.M // Youandewan // East end dubz // Silat Beksi

Discover an extended list containing 10 out of 20 releases, carefully selected from some of the most prominent artists & record labels #ROminimal #micROhouse
Galeria Neagră is a contemporary art project focused on #streetart and #graffiti artists opening their doors on the 6th of May 2021, 5 PM, with a combo exhibition curated by @irloirlo
📣 This week on feeder.ro
The recent EP “Sunet cu ramburs”, composed of two tracks, maintain @barac_artist_page‘s #deep, #dark and rather difficult to understand perspective, all in subtle tones.
Enjoy your weekend and the entire set recorded by @primarietzinah durnig #feedersound #live with @pisicapatrata
@_doubtingthomas_music_ & @wyromusic teamed up with @subtilrecords for their 21st #release
premiere: Topology – Halah (@dragutesku remix) [@vrntcanada]
1. Save or Cancel (@cristina_nwt & Andrei Racovițan) - "@unhiddenromania", #streetart & #graffiti #book
feeder sound · RO
Go to mobile version
×