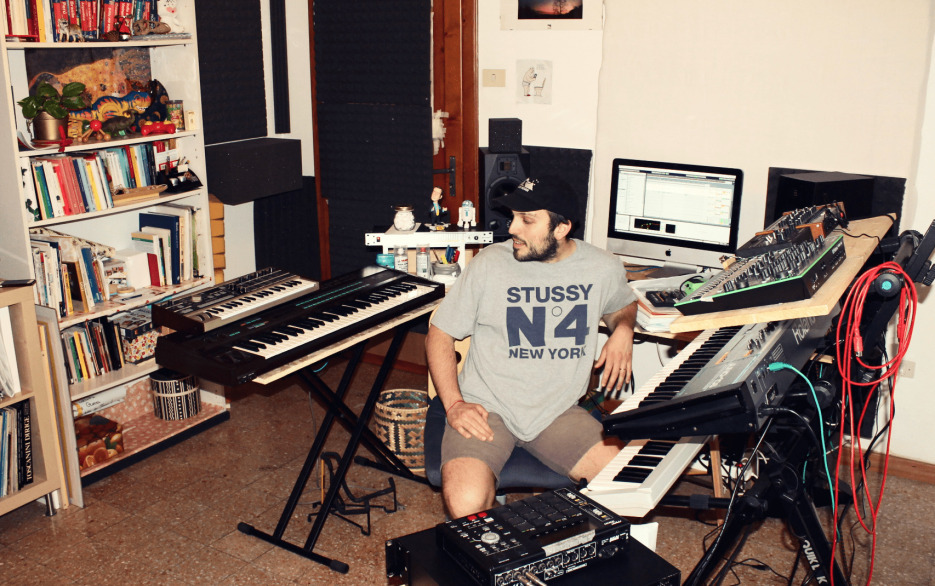 We sat down with head of Flexi Cuts & producer Simone Guerra, to discuss growing up on music, running his own record store, and the plans for Flexi Cuts. See what he had to say below.

Can you tell us about growing up within a family so engrained in music? And do you remember the moment that you knew you wanted to follow in the footsteps of your father in music?

I discovered music in my family when I was young remembering mainly two moments:

– I walked back from school hand in hand with my sister, around 10 years old, walking to the record store of my father that was near the school. That record store is Flexi. I went inside to my father’s workplace, but still didn’t know that this is the place that would become so important to me in the future.

– When I’d grown up as a teen, a young boy… I liked so much to go out with my father, in clubs or private party I’d attend, I saw him DJing and do the music job, dig into the bag, playing alongside many people and living the nightlife. It was great to see people dance to “my dad music”… and it was in these moments that I decided to follow his way.

However, I think I’m so lucky. Because in the years, I’d grown up breathing music everyday with no filters and with all the time I have… with a curious and fresh approach.

What kind of place was Flexi Dischi when it started out? Compared to how it is today.

Flexi Dischi opened in 1984 by my father’s hands. It began in 40 square meters dedicated to the listening of the newest dance music (on wax of course.). Over the next years we moved to a new location with two larger listening areas with a “megastore” trademark, integrating CDs, Gadgets, music shirts and of course a dedicated listening room for DJs.

I remember very well the weekends in store, full of DJs looking for juicy new records to play that night at the disco, sometimes fight for some hot copies. It was great, and it represented a real social music cultural meeting point.

In the days and in the years the market has obviously changed. Even today with the growing popularity of records, sales are still down 50% from the early 2000s. Back in the day we were shifting up to 60 records a day but now it’s more like up to 15 records a day.

Most of the DJs have quit, or buy digital and the places where they listen to music and dance have decreased but despite everything, the feeling was that vinyl records would never be completely run out of the market, we didn’t clear them like many stores did.

Today what we offer is a personal music consultancy on the tastes of the customer, with a large online catalog of used records, rarities in specific genres we love (acid jazz, soul, house, disco etc.), remaining faithful to the line with which almost 40 years ago Flexi opened, taking care of the quality rather than quantity. It’s hard, but we always look for the good wind, sailing on sight.

What was it that made you want to start your own label ‘Flexi Cuts’? What’s the idea behind it? What makes ‘Flexi Cuts’ unique?

I wanted to start the Flexi Cuts label because in the store I met so many talented artists who had no way to get their music out there (including me!).

So I had been planning the first 2 releases for about 8 months, finding many positive results, maybe thanks to the supposed return of the vinyl (or not??!) and I immediately saw good feedback from DJs and people involved in the scene.

The idea is simple but strong with Flexi Cuts, the experience and the history behind the store is evident. A modest record shop, in a small town, a music place that could say many things, but that prefers “only” to publish music (with no hype, no live streaming no blablabla), it’s interesting and unique.

What can you tell us about the upcoming release ‘Flexi Cuts Vol.II’? How did it come about? And what can we expect from ‘Flexi Cuts’ for the rest of 2018?

The idea behind Flexi Cuts is to involve talented artists, but who are also established on the scene (Italian, but not only) and for this the series ‘Piada Vibes’ was born. It’s a V/A that ranges from the north to the south of Italy, as a unique single vibe.

For the rest of this year, I think at least 2 other releases are planned, but I do not want to say too much, it brings bad luck! We prefer to go record by record. However, obviously we are always looking for artists, demos and interesting music, we’re open and react to the game!

You’re also a producer under the alias ‘Relative’, what can you tell us about your approach to making music and your biggest influences?

I grew up with music; thanks to my father I learned the art of DJing and listening to music in a natural way. My approach has always been very creative, and for this reason I slowly composed my method of research and production, building my studio and producing the first ‘Relative’ music.

‘Relative’ is the abbreviation of “Relative moods”, because I think the music you make must somehow contain something of you, the mood you feel in that moment, and it is very nice when you go to listen back to your old records and maybe you recognize these moments in your life through the music. In the studio I’ve got some instruments to which I am very attached, and with whom I am developing a deep musical relationship.

Influences; from Donald Byrd to Pink Floyd to Depeche Mode … from Marvin Gaye to Herbie Hancock to St. Germain … from MJ to Sade to Jamiroquai … from Giorgio Moroder to Daft Punk to Larry Heard ..from Lucio Battisti to Lucio Dalla to Franco Battiato .. (and so on!)

Do you have any of your own releases coming out soon?

So the fact is that I have a lot of unreleased tracks, but not forthcoming release, but I think my next will be on Flexi Cuts.

So you’re a record store owner, record label owner, producer and DJ. If you had to only choose one to stick with from now on, what would it be?

The DJ, with no doubt!