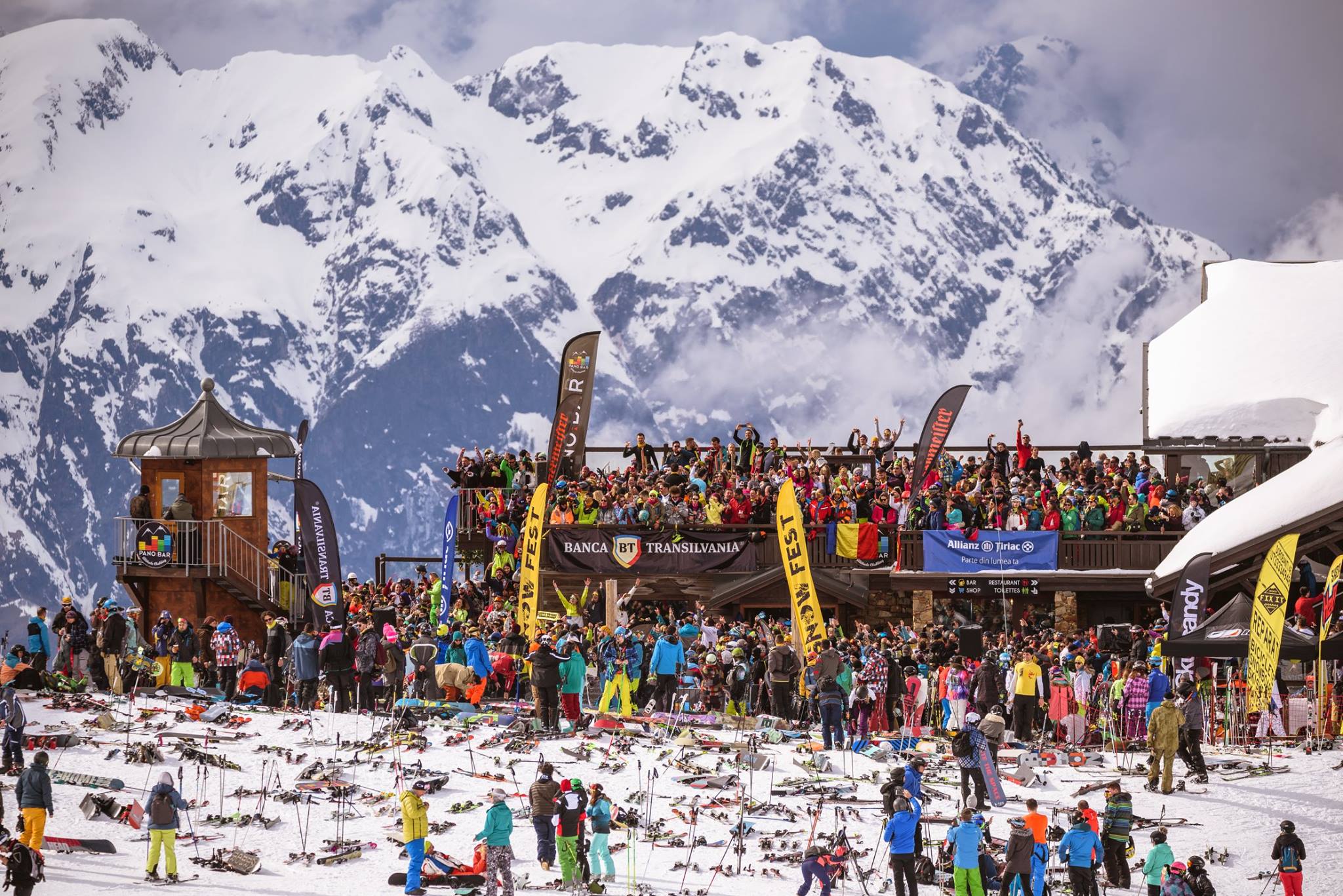 It was snowing, there was music it was FUN! That’s simply a brief introduction of how I would characterize Snow Fest. You would expect an all-Romanian snow festival with a strong emphasis on having fun and combine the pleasures of winter sports, music and a Romanian crowd to be outstanding. In that case, I have news for you, IT ACTUALLY IS!

The way to Les Deux Alps is similar to a trip to the moon. You embark on an adventure through narrow valleys, sprinkled with a touch of snow, just to tease you of the fruitful snowy possibilities that await you. In the end, your final destination is a small resort at the edge of the French Alps, where winter is everlasting, even in the bloomy late spring. At 1300 meters, the resort is a piece of small heaven with a steep ravine overseeing the majestic mountain chain.

You wake up thinking you are far from Romania, but you brought Romania along with you. During the day, the resort is calm but up on the glacier, you can sense the roaring Snow Fest echo, with its vibration that you feel tingling, as you get ready to hit the slopes. For the next 6 days, the mountain will be held hostage to good music and a bunch of lunatics shredding and carving through the slopes. Home-based at an eccentric spot up 2600 meters, the Panorama bar is an oasis of good music overseeing the heart of the glacier. With an exquisite panoramic the likes of Suie Paparude, Golan, MadLiquid or Mihai Popoviciu trademarked the entire surroundings with their Romanian touch. The locale was packed and while some enjoyed a crowded setting, on the outskirts of the bar, people were dancing, drinking and even flying and falling (trying to break an unbreakable snowboard).

As a day of snowboarding came to an end, the blue road leading to the base of the mountain turned into a game of dodging everyone else. Your main objective was to last another day and the adrenaline of losing control was the only thing that kept you on your feet as you progressed down the mountain. At the base of the mountain, a live stage was hosting emblematic live music artists from the likes of Coma or Subcarpati who were providing the soundtrack for that specific day. You could see how the Snow Fest participants had limitless energy as they continued to dwell into the party, only this time in a more tranquil manner.

There’s something about how a live Subcarpati performance fuels your body and mind just the right amount to keep you going through the early evening. The ritual of post-concert was consumed and interpreted differently. Some chose to keep the buzz for another few hours and hit the Umbrella Après-Ski. Your second option was to zone out of the festive area and take a chill pill before the upcoming night out. The evening music platter was extremely diverse. From house/techno artists such as Mihai Popoviciu at the L’Avalanche, live concerts at the typical British Smokey Joe’s bar to drum & bass/dubstep evenings at Grotte Du Yetti, Snow Fest got you covered for the evening.

Personally, after a previous striking experience at a snowboard-festival, my choice was to not give into the temptation and just focus on the daytime events and enjoy the prolific slopes. The weather was mild, with a few perfect days of sunshine and clear slopes or an abundance of Christmas like snow where all you wanted to do was ride the pow. The versatility of the festival with the convenience of day and night events to choose from and the scenic settings make Snow Fest an oasis for the Romanian clubbing scene and I applaud that!