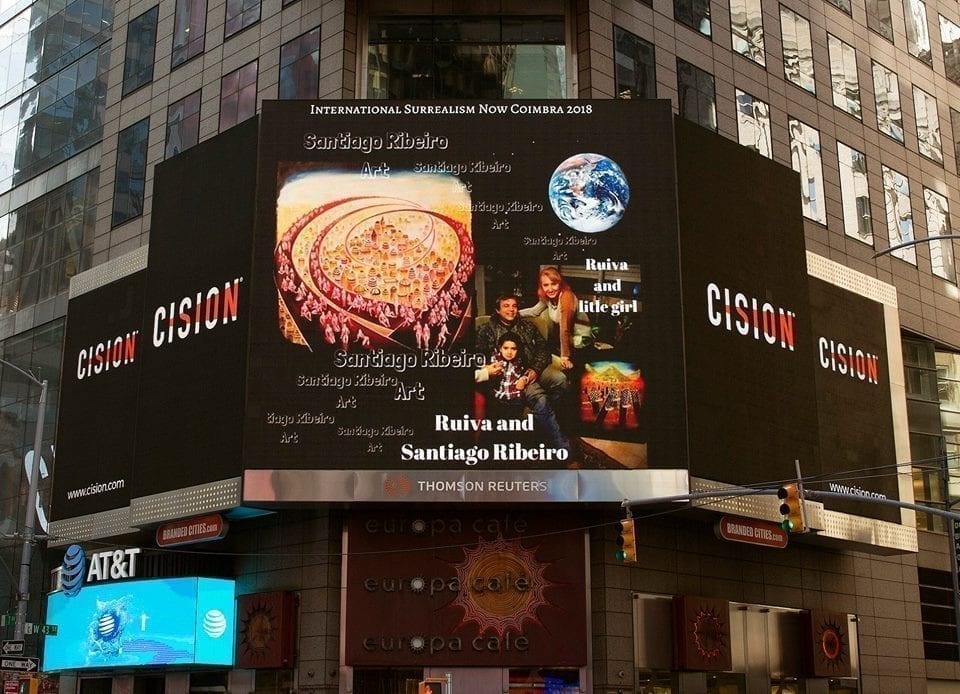 (Image by Santiago Ribeiro)
International Surrealism Now exhibition to open at the Coimbra House Culture and Edifício Chiado Museum in Portugal, 17 November 2018
New York, United States, 10/04/2018 – Once again in Times Square at New York city, we could see a new edition of the multimedia art show of the Portuguese Surrealist artist Santiago Ribeiro.

Santiago Ribeiro has been featured since July 2017 at the Thomson Reuters and Nasdaq OMX Group at Times Square in New York City and will remain highlighted throughout 2018.

Art with the courage to face World issues head-on, creating unprecedented opportunities for dialogue can help change the world order. The planet has been spiralling into a dangerous period in our collective history. Wars inspired by the highest profit margins and savage monopolistic capitalism feeding modern imperialism results in radical terrorism born of medieval societies using 21st-century technology to combat these dictatorships. With a diverse population of billions, how can we possibly create a state of a social equilibrium. These factors drive the Contemporary Surrealist movement. Art has the capacity to open up these wounds, face them head on by offering fresh perspectives and solutions to address World trauma.

The re-imagined fiction behind the dreams of the beautiful presents lyrical meaning of surrealism inserting the hope of a new life. Giving new hope and considerations where the colours interact with the “blue thinking” while opposing the “dark thinking”.

Images of Flying in a dream implies freedom and possibilities through fantasy. The wings spread and the embracing arms stretch wide, flying through the buildings, mountains and valleys, sea and rivers.

Understanding surrealism of the 20th and 21st century opens our awareness to an absolute freedom.

So the dream, the creative and ideological freedom and courage of the artists combined with the modern advent of the internet broad inserts the surrealistic art of 21st century and its insightful psychological meaning into the World. Curated works from 107 artists representing 48 countries will be on display with International Surrealism Now exhibition in the city of Coimbra in Portugal, Europe, next November 17, 2018.

International Surrealism Now exhibition started in 2010 organized by Bissaya Barreto Foundation and Santiago Ribeiro. And after 8 years becomes The world’s largest surrealist art exhibition of the 21st century, with 107 surrealist artists from 45 countries and five continents will participate.

Note: The renowned cultural magazine, The Culture Trip , named 10 Portuguese artists as the most internationally recognized at the present time and Santiago Ribeiro it is one of them.

Ribeiro’s work has been featured at the U.S. Embassy in Lisbon , in the Portuguese American Journal , in Digital Meets Culture , Pressenza fr , metroNews.ru , Pravda in Portuguese , The Herald News , ARTVOICE , Associated Press , EFE , APA ots, AAP , Reuters , ANA , News Aktuell and many other publications can be seeing on the link.

more info about the author at Linkedin profile