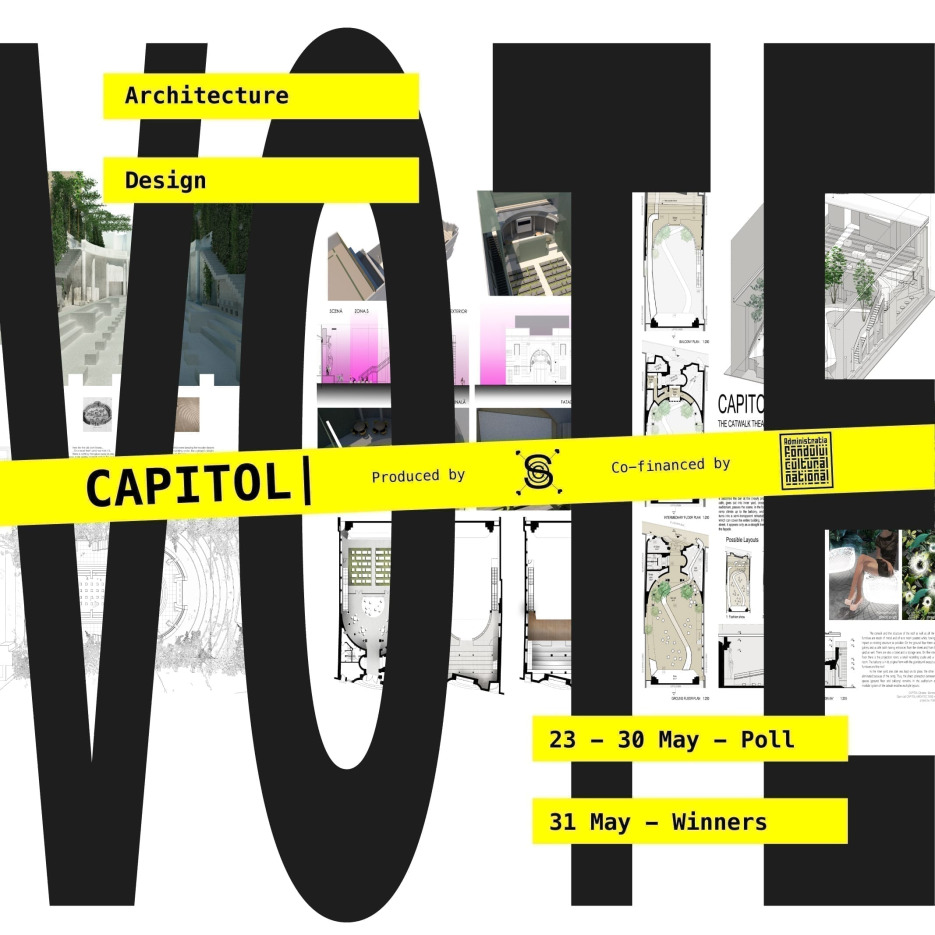 Save or Cancel invited you to recharge CAPITOL’s future and here are the 3 interesting entries received in the OPEN CALL ARCHITECTURE & DESIGN – Shape the future of CAPITOL. We thank the authors for their imaginative and inventive proposals. We invite you to revisit the contest brief to inform your decision. As 2 of the 3 entries have been written in English, so is this article.

We are thrilled to present to you the authors’ bold visions and look forward to learning your favourite project.

Please scroll down to cast your vote.

DESCRIPTION: Here lies the old bath-house. Or at least that’s what we think it is. There is nothing that gives away its presence. It sits quietly, a small oasis in the middle of the desert city. As we pass by, what we think are, the changing rooms and some sort of small art gallery, we suddenly found ourselves overwhelmed by the lush vegetation that filled up the courtyard. In the middle lies what we presume was the main bath although seeing it empty one could say it’s an oddly shaped bench. The stepping stones in the middle surely had some sort of hidden function, were they only used for the menial task of sitting or did they bare the weight of heavy objects? There, inside the bowl, the whole courtyard opened before us. Judging by the wooden beams, it’s not clear if at one point there was a roof, but it is certain that a green one is present here now. Two concrete stairs stood heavy, solemn, resembling two gateway keepers. We paid tribute and they granted us access to the upper level. On our way up we realize that the green vines were climbing on tensioned cables which were keeping the wooden beams form buckling under the canopy’s weight. Once at the top, waves of stairs dragged us out from the soaring heat and greeted us into the sheltering green vault. The rippling effect was maybe caused by the commotion that was in olden times below. Across the courtyard, the two statues seem as if they are tirelessly keeping the whole courtyard from collapsing. Between them spans a portal leading to nowhere. It was only late that we finally understood…

DESCRIPTION: The project we implemented involves the subdivision of the available open space of the theatre, thus achieving a flexible compartmentation. The resulting spaces have diverse cultural destinations which can also work independently at the same time, or as an open set for one. With the modern solutions proposed, we wanted to rediscover the space in the cradle of a new identity that reminds of the aged theatre and the old bohemian atmosphere of Bucharest. Thus we proposed to divide the area for the public into two sub-zones – one dedicated exclusively to those who watch a play or a film projected on the main stage and a closed one, separated through a mobile glass wall that hosts different workshops / activities.

On the ground floor, from the entrance to the main area of the scene, we placed the ticket shop in a space with a strong visual impact, opposite the wardrobe and the access to a Coffe Shop – To go. From the street, you can access both an art gallery and the Coffe Shop, encouraging passers-by to taste the artistic atmosphere of the interior of the theatre. In the immediate vicinity of the access, there is a small space dedicated to a security person. Stairs are protected by a system of glass walls, along which posters are exposed.

At the balcony level, we propose to expand it with a smaller scene that would not disturb viewers visually but would enable the easy tracking of any activity on this new structure.

As a temporary cover solution, at ground level we have proposed a system of canopies to cope with the weather. For the balcony, we propose a more unusual solution, namely a tilted covering system, doubled in the interior with mirrors of regular shapes. Thus, at the street level, one can see a mirror strip that actually reflects the activities that take place inside, a frenzy from the unique and lively atmosphere of the Capitol Theatre.

DESCRIPTION: You enter the auditorium. You are watching a movie. You are a viewer. You are a performer. The movie is watching you.

And if you closely there are a lot of other viewers in this theatre: the passers-by on the street, the coffee-drinkers at the bar, the visitors who are sitting on the balcony and are watching everything except the movie.

So, the interventions proposed by the project give place to these watchers and new performers. There is a CATWALK unfolding through the old building. Starting from the street, it enters the theatre through a side door, it becomes the bar at the café, goes out into the inner yard, crosses the auditorium, passes the scene, climbs up to the balcony like a ramp, and finally turns into a semi-transparent retractable roof which can cover the entire building. From the street, it appears only as a straight line above the façade.

The catwalk and the structure of the roof, as well as all the outdoor furniture, are made of metal and of wire mesh painted white, having as little impact on existing structure as possible. On the ground floor, there are an art gallery and a café, both having entrances from the street and from the inner yard as well. There are also a toilet and a storage area. On the intermediary floor, there is the projection room, a small recording studio and a technical room. The balcony is in its original form with the grandstand, except some new furniture and the roof.

In the inner yard, one stair was kept on its place, the other one was eliminated because of the ramp. Thus, the direct connection between the two spaces (ground floor and balcony) remains. In the auditorium zone, the modular system of the catwalk enables multiple layouts.

– 2 prizes, a jury award in a net amount of 1.000 lei and a special audience prize in a net amount of 450 lei;
– a chance to refine your idea, sourcing more insights from our team, on additional meetings;
– promotion or your work.
– the contest is designed as a case study, asking young professionals about the potential that this space offers and is not meant as a final solution or working document

JURY: Selection of the winning idea

Which vision feels like an exciting future for CAPITOL?

Let us know in the comments what you like in particular about your favourite project.

The multi-annual cultural program “cultural hub Cinema / Summer Theatre CAPITOL” is co-funded by AFCN. The program does not necessarily represent the position of the National Cultural Fund Administration. AFCN is not responsible for the content of the program or the way the program results can be used. These are entirely the responsibility of the beneficiary of the funding.