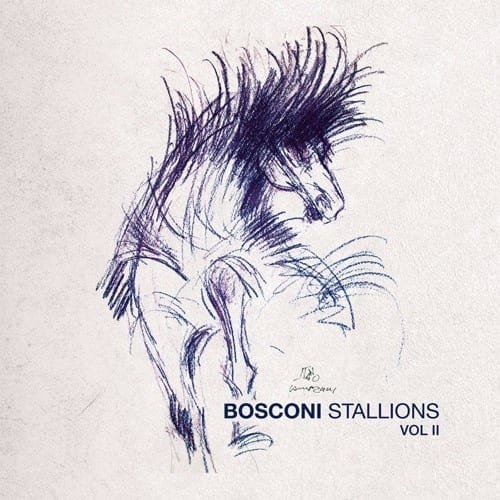 Bosconi Records has long been renowned as arguably Italy’s foremost exporter of house and techno music. 10 years in, they celebrate one decade in the game courtesy of ‘Bosconi Stallions Volume 2’, a 3 x 12” release that features some of the label’s most prominent names. 5 years after the inaugural ’Stallions’ release, ‘Vol.2’ is a timely reminder of the talents of one of electronic music’s most consistent labels.

Before we get to the music, a word for the artist. Bosconi’s iconic stallion is presented again, this time by none other than Silvano ‘Nano’ Campeggi. In case you’re unaware of the man’s work, Campeggi is one of Italy’s most renowned contemporary artists. Active since the 50s, he has portrayed cultural icons such as Marilyn Monroe and designed ‘Ben Hur’’s iconic advertisements, which is where he first developed his famous horses concept. His iconic images are associated with the golden era of Hollywood, and he also worked on artwork for the likes of ‘Napoleon’ and ‘Casablanca’.

Suffice to say, stunning artwork should only be matched with stunning music, and ‘Bosconi Stallions Volume 2’ is very much a triumph in this regard too. From Nas1, who kicks off the release courtesy of the brilliantly bleepy ‘Peli Peli’ (complete with 8-bit sounds) to A Guy Called Gerald, whose ‘Always’ sees him welcomed back to the Bosconi fold in emphatic fashion to label boss Fabio Della Torre (who perks up under his Minimono project alongside Ennio Colaci with ‘Pandora Peaks’), this is a release that’s stuffed to the brim with high-quality electronica.

The likes of Riccio (‘Get It On’) and Rei Loci (the suitably named ‘808’) are reminders of the label’s ability to introduce new talents, whereas British tech-house stalwart 100hz shows he’s lost none of his panache on ‘Tenderness’ and Rufus (a member of Bosconi Soundsystem alongside Della Torre and Mass Prod) impresses on the haunting, eerie tones of ‘Under the Line’. Mass Prod is another individual who makes a stunning solo addition here, with ‘Mathemagix’ a frankly mental piece of music that has to be heard to be believed.

The release is full of surprises too. Life’s Track (aka Herva & Dukwa) impress on the chaotic, UK-inspired strands of ‘Wasting My Time’, while Herva’s gorgeous ‘Crash Point’ makes for a fitting finale. Elsewhere, up-tempo cuts from Dukwa (’Thanks Daddy’), Bosconi Soundsystem (‘Tutto Gas) and Soutine ft. The Clover (‘Florence Shuffle’) ensure the listener stays enthralled throughout. A package that features a plethora of exciting sounds, the much-anticipated second ‘Stallions’ series is a real joy from start to finish.