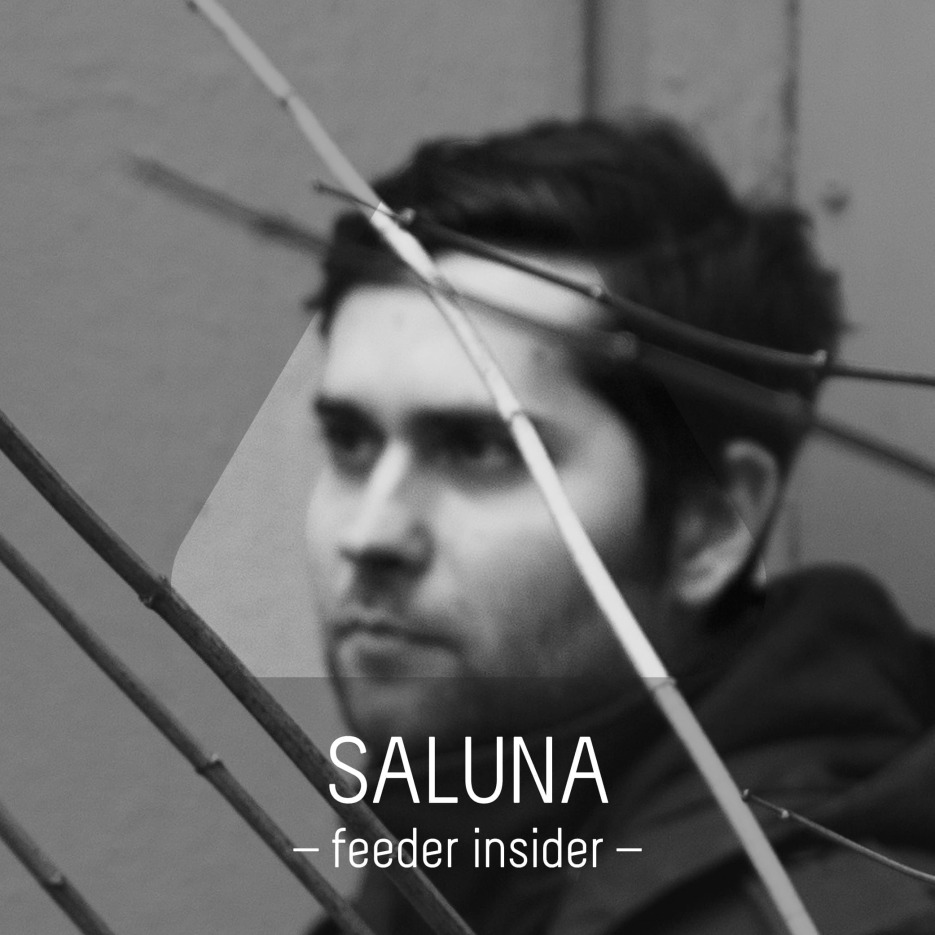 Saluna is the Bucharest based producer and DJ who sets his musical playground around glitchy, dark, analogue, electronic sounds. With an alternative-instrumental background, the maven behind the Saluna project marks its debut in composition/production, mixing synth textures with discrete vocals and a whiff of instrumental elements.

If I were to mix pictures instead of tracks… it would be old SF movie posters, pictures of cosmic settings and brutalist buildings.
Awkward silence is when… I’m ignoring people, while a fresh idea pops up into my head.
I recently discovered that… I have the Architect type of personality.
A specific element all my gigs had in common until now… is the focus on smooth melodic textures.
Every year I… do that crappy New Year’s resolution list.
As a child, my favourite cartoon was… definitely Captain Planet.
Your dream line-up includes… Suzanne Kraft, Patricia, åmnfx.
My visual inspiration comes from… Joaqim Trier, Yorgos Lanthimos, Dagur Kari and Michael Haneke movies.
A new music genre I would discover… would be Disco Halal.
3 artists that inspire me… Thom Yorke, Paul Thomas Anderson, M.C. Escher.

Sinzi Baltac: You launched your first EP as Saluna in September at MNAC, but also your first video, created by talented local director Tudor Jurgiu. The video for ”Grace” was telling a beautifully weird story about love. Tell us a bit about the main idea behind your new video, for “Pieces”.

Saluna: The new video is made by creative power couple Raya Al Souliman and Horatiu Sovaiala. It depicts the story of a misfit, wondering around Bucharest during a normal day of his life. Isolation is the central theme of the song, and somehow, it is perfectly portrayed in images. Although there are no professional actors playing in the video, Alexandru Dorobantu’s performance is one of the strongest elements of the video.

Sinzi: “Pieces” is the slowest tune from your EP, giving it also its name. What does “Pieces” mean to you and what inspired you to create it?

Saluna: I consider it a powerful song. It’s about the difficulty in adapting, fake role models and status anxiety. It’s slow but angry. It’s also the newest track of the three composing the EP. I guess it also makes a good EP title, since the tracks were made in different stages of my life, and since they have somewhat different directions.

Saluna: I’m currently working on some new tracks, approaching things a bit more differently. I’m trying to organize some eerie sounds into a dance floor driven structure. It’s the first time I leave out the voice layer and this changes things dramatically. But I’m really excited to try new stuff. At this point, it feels like an experiment, since I’m simultaneously developing three individual drafts without an actual final song until now. Hope to get my mind around it soon. And I guess this anticipates the next question.

Sinzi: Sonically wise, your DJ persona is very different from your producer persona. Which are the best ingredients you use to make both of your musical products thrive?

Saluna: I think the melody represents the common ground. I always search for nostalgic/ synth-based melodies both for my productions and for diggin’.

I also like how old electronic hardware like the 707 or the Juno-106 are reinterpreted today and I’m constantly chasing that lo-fi vintage sound quality.

Saluna: Yes, your whole emotional luggage actually gets soaked into your songs eventually.

Lyrically, I write about daily encounters, personal issues and places I go through. I find travelling very inspiring and sometimes I get really eager to get back home, reach my laptop and start a new track. In the end, all creative activities can also be considered catalysts for making new music.

Sinzi: Your beginnings in music were rock-infused. Tell us about how your love story with music started.

Saluna: As a child, I was a huge Michael Jackson fan. During college I started playing the guitar, as I was really into alternative rock acts like RHCP, Kumm, Radiohead, Timpuri Noi etc. Some of them are still close to my heart. I had always been curious about how playing a musical instrument feels like, and, as a teenager, I finally experienced it. Back then, I first tried to engage in composition, but it was really difficult since I didn’t have a stable band behind me. Also, I didn’t feel mature enough to be able to create good songs at that point. So I caved for some years and didn’t consider trying to compose again until Saluna happened.

Sinzi: What is the musical mission you envisioned for Saluna?

Saluna: The plan is to write new songs that reflect my present mood/ condition and to be really honest about it.

Sinzi: It is already obvious that you have a deep relationship with music in all its forms. After you will feel you have reached the peak with Saluna, what do you feel it seems like the perfect next steps to make for your artistic ego?

Saluna: I’m just getting started with Saluna and the peak seems so far away. I feel like I have a lot of possibilities to develop an interesting live set for example, and currently, I’m trying to organize it. I may also invite other people to join me in composition/ live performance. Luckily, there are too many instruments/genres to get bored of music and I don’t think I’ll quit making music very soon. It’s actually the opposite.

Sinzi: feeder.ro turns 14 this year as the main alternative nation’s news agency. Do you have a message for our community of readers, who have stood by us for almost a decade and a half?

Saluna: To start with, it’s just a great honour to be part of the feeder insider selection.

I remember 10 years ago when I didn’t have a Facebook account, feeder.ro was the only Romanian publication which promoted cool parties and fresh cultural projects. It coincided with the period when I was switching from concerts to parties. Up to that point I have had a more “rock” musical background, and feeder caught me just at the beginning of my transition to electronic music.

Sinzi: If you could create for us an anniversary feeder sound mix, what 5 tracks would it include and why?
Saluna: Despite its age, Feeder is still kicking and hopefully will continue to keep us connected. I’m just listing some new findings that may be included in my next mixes. Here’s to future projects and to future sets!