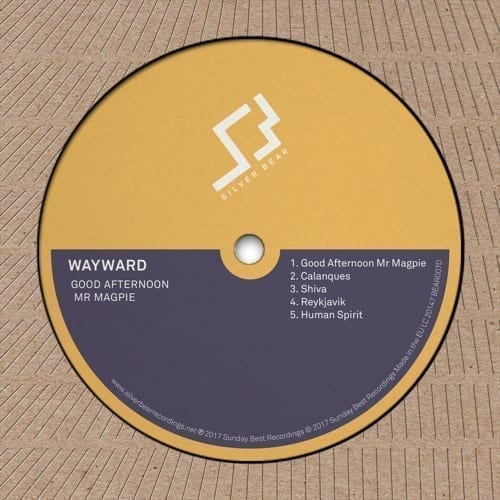 Wayward build on their impressive 2017 with their latest body of work, Good Afternoon Mr. Magpie EP. Lawrence Hayes and Louis Greenwood enjoyed a momentous 2017, with tracks such as ‘Transience’ and remixes by the likes of Man Power quickly etching their name into the scene’s collective consciousness. They also picked up a host of high-profile supporters as they went, with DJs as diverse as Dixon and Gilles Peterson supporting their music. The year saw the play shows with the likes of Chaos In The CBD, O’ Flynn, at festivals from Secret Garden Party to Bestival.

If 2017 was the warm up, 2018 looks set to be the year Wayward solidify their burgeoning reputation. ‘Good Afternoon Mr. Magpie’ sees them return once more to the Silver Bear label, an imprint that’s housed some of their most prominent works to date. Kicking off the release is the sounds of the title track. A melancholic journey that’s notable for its twinkling melodies and clever percussion, it’s an emotive record that has us yearning for summer climes already. ‘Calanques’ keeps the vibes firmly intact and is another restrained and delicate number full of warm, delicate motifs before ‘Shiva’ introduces us to the other side of their repertoire. A more peak-time flavoured effort, its eerie, menacing tones are once more indicative of a duo unafraid to experiment — and being greatly rewarded for doing so.

The nimble ‘Reykjavik’ is another that takes the proverbial breath away. Another dramatic, impactful track, it starts off on a relatively innocuous tip before the sprightly baseline weaves its magic. Another delectable jam that perfectly epitomises Wayward’s knack for bridging the gap between the dancefloor and the more soulful side of electronic music, it neatly paves the way for the EP’s closing gambit, ‘Human Spirit’, a reflective track with which to sign off on.

About the release, they had the following to say:

“Good Afternoon Mr. Magpie, sparked the start of a song-writing period that formed the sound of the EP. It was written in a barn nestled in a remote Valley in the South West of England with little contact to the outside world. We liked how it mixed organic, live and electronic sounds and textures together. As for the EP title, there was a picture of some birds on the wall, maybe Magpies maybe not….. but that’s where that came from.”

Good Afternoon Mr. Magpie serves up a fascinating insight into Wayward’s collective chemistry, with five eclectic tracks that are sure to win them new fans aplenty.