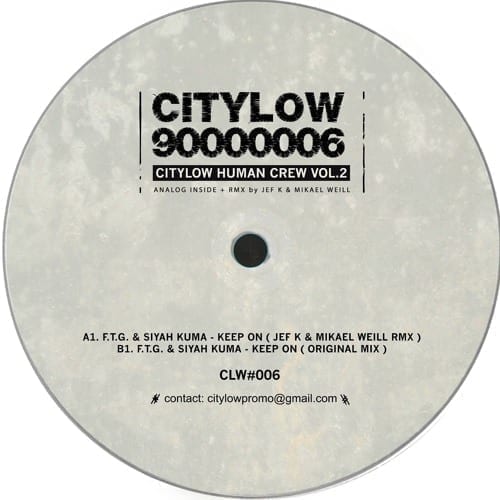 The Berlin-based Citylow label has been releasing quality house and techno for some time now. Born from a mix of musical influences from the metropolitan sub-urban life, the label is characterized by vintage, analogue sounds, modular systems and the many other influences of label manager Alfredo Trastulli aka F.T.G. The heart of the label is CITYLOW HUMANS CREW, a movement of underground artists around the world who day after day match their story with an underground music philosophy.

Staunchly dedicated to vinyl culture and with an ethos that tends to veer toward assured, confident sounding house and techno, theirs is a modus operandi that’s served them very well indeed. For their latest, the attention switches to Fuckthegovernment Ltd. label boss F.T.G, who hooks up with regular collaborator Siyha Kuma for another release that speaks volumes of their talents.

The A side features the remix, which comes at us from none other than the parisienne talent Jef K, who in this instance has hooked up with Mikael Weill to supply a differing take on the original. Jef K of course, is a man who needs no introduction to house music fans. One of Paris’ most acclaimed DJs and producers, he has a monthly gig at famed club Concrete, where he’s renowned for sumptuous basslines and exquisite house music. Gritty and relentless, their remix is characterised by some steely bass hits and a stubborn refusal to compromise. A gnarly jam that soon comes to life courtesy of a quite brilliant bassline, this one is sure to make an impression wherever it’s let out of the bag. Exceptional stuff we’re sure you’ll agree.

Elsewhere, the B side features the original, which we soon realise is where the aforementioned remix earned its industrial stripes. Full of pensive, tense dramatic overtones, it’s a gargantuan track of the sort that will make most sense on a packed, large dancefloor. An EP of various shapes and sounds.