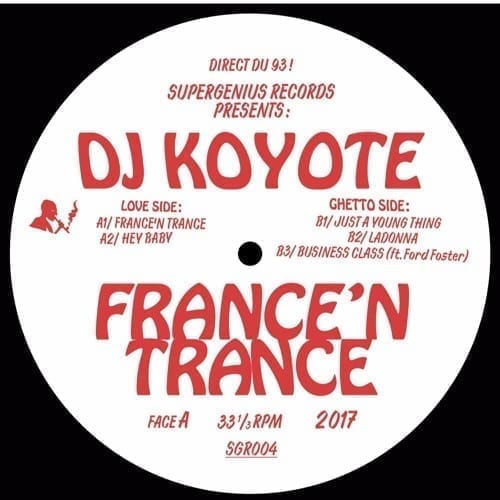 DJ Koyote has long been a dab hand at discerning house music. Thankfully, his latest offers more of the same. Seeing the light of day on his own Supergenius Records imprint, “France ‘n’ Trance” sees the French producer perk up with no less than five original cuts, each of which boasts its own inimitable charm.

Opening up the release is the sounds of the title track. A melancholy effort full of warm, hazy vibes, its skipping, playful ethos is characterised by its twinkling, charming melodies. A smile-inducing track that’s sure to prompt delirium on the dancefloor, it gets us underway with some distinction.

“Hey Baby” sees the producer opt for more uptempo strands. Featuring a killer Biggie Smalls vocal sample and a series of off-kilter elements, it’s a completely different proposition to what’s come before – albeit one that emphasises the producer’s knack for the unpredictable.

“Just a Young Thing” sees the producer hark bark to vintage Chicago times with a jam that could well have been lifted from Trax’s back catalogue. Full of booming kicks, claps and snares, this one plays out like a modern interpretation of a classic Armando joint. The quite expertly names “Ladonna” is an exercise is peak-time funk flavours, before “Business Class” sees us out the door with another track that suited to the night’s most fervent moments. An industrial-tinged track of techno persuasions, it’s a hot and heaving effort that’s as likely to leave you in a cold sweat as it is reaching for the lasers. There’s no doubt about it – Koyote’s latest is a triumph from the beginning to the end.