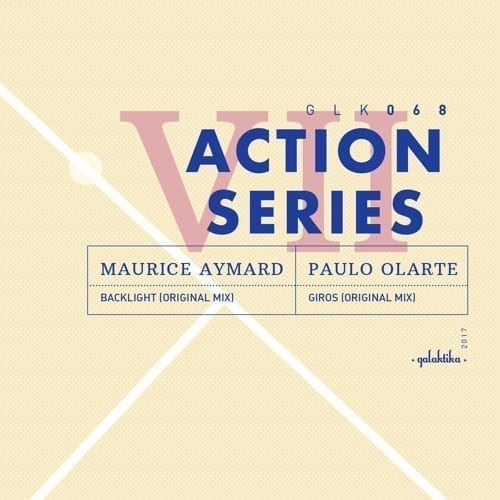 Maurice Aymard’s Galaktika label has long been a source of discerning house and techno, so it’s no real surprise that its latest is very much cut from the same cloth. The latest in the label’s Action Series, it once again features two producers, each of whom serves up one original track each. It’s a neat way of working that’s served them well thus far, and with no remixers diverting attention, it ensures the spotlight is very much on the two tracks on offer.

Opening up the release is the sounds of Aymard’s “Blacklight”. A driving, charging, a battle weapon of a track, it’s full of intense motifs from the get-go. Full of suspense and trippy synths, it’s a moody track that’s primed for that moment in the night when things begin to take a different turn. A surefire party starter, it’s sure to be appreciated by the likes of Steve Bug, Michael Mayer and Maceo Plex to name but a few.

The other track comes at us courtesy of Paulo Olarte. The up-and-coming Colombian has already turned for Galaktika, releasing his album on the label to great fanfare last year. Having already turned out for the likes of liebe*detail, Diynamic and Fresh Fish, Olarte reminds us here just why he’s earning plaudits aplenty from some of the scene’s foremost players. His track, “Giros”, is the Ying to “Blacklight”’s Yang. A sun-kissed gem that’s full of warm, melodic vibes, it’s a beacon of positivity, arriving at a time when the temperatures are starting to plummet in Europe at least. An intricate gem, it’s proof once more of the excellence with which both Galaktika – and Olarte – are more than capable of conjuring up. Splendid stuff all around, we’re sure you’ll agree.