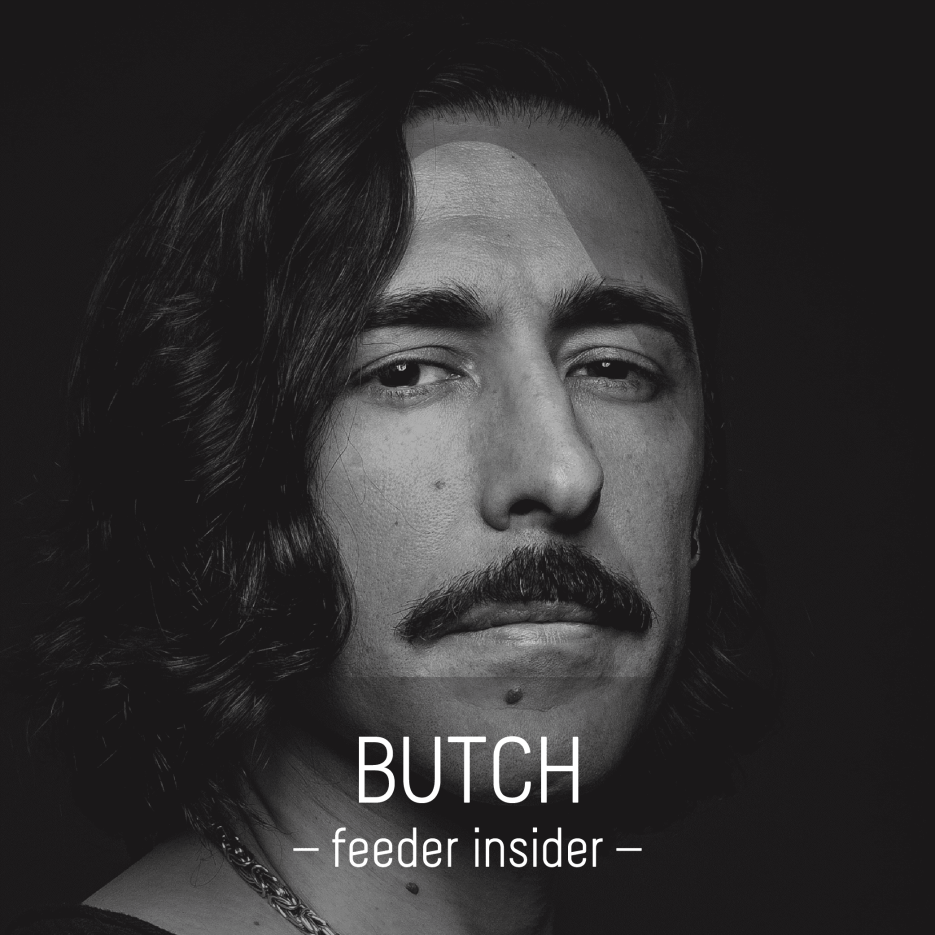 This week, marking the 124 interview in the feeder insider series, we have the big pleasure to welcome the mysterious Bülent Gürler aka Butch. He lives and works in Mainz, Germany, but his music is travel all around the world and has been released by a lot of well-known labels including Moon Harbour, Visionquest, Hot Creations, Desolat, Watergate and Rekids. Last year, Butch has added to that list a release on Seth Troxler’s Tuskegee imprint titled Jack Your Body. His own label, Otherside, launches next year an EP featuring himself and Ricardo Villalobos, which we’ve already reviewed.

Despite the extensive discography, however, he regards himself outwardly at least as more of a DJ than a producer. In tandem, Butch is running a residency series titled Down The Rabbit Hole at Watergate Berlin.

As a child, I watched a lot… Dr Snuggles.
When I need to unwind I…. go to the studio.
My favourite sport is… running.
A place where I like to eat out…. Kristen Stewart’s pussy.
If I hadn’t become a DJ, I’d… be a Physicist.
Before every party… I rest.
I wish I knew how to… beat up people.
My spirit animal is…. Koala.
The perfect holiday is…. what’s that? Never heard of it.
3 of my favourite 2017 releases… no idea.

f: Hello, BUTCH! I was great to hear you play again at Neversea Festival, your 9th performance in Romania. What were your thoughts returning to this part of the world? What impression did the local music scene and audience make on you?

BUTCH: Romania is one of my favourite places to play, I get to play minimal and experimental sets which I love. The audience has very high standards, but they also know how to have an amazing time. I’m always happy when I see I have a gig coming up in Romania.

f: You’re hailed as one of the most innovative and unpredictable musicians of today, pushing sounds from groovy deep house to uplifting techno and consistently producing roof raisers. Tell us a bit about your musical background and the factors that shaped your sound.

BUTCH: I had troubles falling asleep as a child, so I’d sing myself to sleep, inventing songs like that. I learned some guitar, but basically, I started Djing at the age of 12 and producing shortly after.

f: After your smash 2013 release with Ricardo Villalobos, ”Up”, 2018  brings out two exquisite gems from your co-composed vault, as ButRic, on Otherside. What is the story of this thrilling release?

BUTCH: Whenever I’m in Berlin and Ricardo happens to be there, we hook up and get into his amazing studio together. We’ve already made tons of tunes, we don’t really talk in there, all we do is make a beat, record, play stuff, record and start the next beat. Both Ricardo and I have been playing “Fünfviertel” and “Down” a lot and people kept asking us about them, so now we decided to release them.

f: What does a typical day in the studio look like? What „tools of the trade” do you most commonly rely on when creating new tracks?

BUTCH: In my own studio back in Mainz I treat it like a job: I go there in the morning and work until the evening like other people goes to the office. I just happen to have the greatest job, cos I get to make music, which is awesome. I work with Logic and some synths, but these technical things aren’t as important as listening deeply to the music in my head and then working towards producing that music so that the world can hear it.

f: Do you find that pursuing your goals as a DJ and doing the work required for international acknowledgement takes too heavy a toll on your personal life?

BUTCH: I surround myself with understanding people, but sure, the family has to deal with me being gone, which sucks. I’ve been thinking about this more now, since becoming a dad. It’s not easy, but honestly, it’s just like some other person, who has to travel for his job. I’m usually gone for the weekends, but come home during the week.

f: How would you describe your personal philosophy with regard to being part of the electronic music scene?

BUTCH: Do your thing!

f: Otherside and, to a certain extent, ButRic too, are projects which allow you to tap into mind-expanding acoustics and venture deep into uncharted musical territory. What instruments, processes and sounds would you like to further experiment with?

BUTCH: Good question. Generally, I just want to try out shit, you know, I educate myself regarding psychoacoustic effects and all that stuff, which I find totally fascinating.

The most important thing is to actually try out the stuff you read about, that’s how you learn and that’s what I’m doing at the moment a lot.

I just experiment with a lot of shit and see what I dig.

f: How do you transfer ideas, emotions and establish a connection between your sound and the public?

BUTCH: Music is a language as many people say, so I think about what it is that I want to say. I know that if I have something meaningful to say, people will be into what I do.

Music always talks about stuff that we don’t know because if we knew it, we could put it into words.

I think that’s why people love music because it helps us grow and get to know more nuanced understanding of reality and ourselves. I share that love for music so I think that you can tell that listening to my songs and that connects the listeners and me.

f: You were in charge of the 18th edition in the Watergate mix series, the world-famous club where you currently hold a residency, and recently your track Shahrzad was remixed by Matthias Meyer on Watergate Remixes 01. How did your story with Watergate unfold?

BUTCH: I played there once at a friend’s birthday party and the guys from the club really enjoyed my set a lot. We talked after my set and thought it’d be cool to have a regular event. For me, it was awesome because I love Watergate and for them, it was awesome cos they love what I do. The idea for Down The Rabbit Hole, my night there, is to go deep into the music and explore where the night might take us. That’s why I only ever have one guest per night and we don’t have fixed set times. We need the time and space to see where the night leads us.

f: The feeder insider series aims to explore the universe surrounding music and visual arts while taking the pulse of the artistic field both locally and internationally. What would you list as the most notable developments in electronic music these days? Any particular attitudes or shifts in the status quo you feel concerned about?

BUTCH: On the whole, this is a great time to be alive. Things could, and need to be, better, but all, in all it’s never been so good. There is a lot of shitty music and crazy, 15minute of fame kind of shit all around, but my approach is just to ignore that shit, to stay focused on putting my strength towards building the good stuff up in and around me and that takes all the energy I have. Good times, baby!