If the Romanian graffiti community would have a key-symbol, then surely it would be the piggy-dog created by AEUL. Present uptown and downtown, on the streets and on the main road, the piggy established itself a real reputation on the urban scene. More on the artist you can read below. More and more I think of… coloring the whole Bucharest…The whole country, really the whole Europe.
I don’t travel without…paint and “inspiration”
I play… hide and seek with mister officer.
Saturday night… I relax after a week of drawing on beer.
A good movie I just saw… I don’t know, I don’t really watch movies; I have my own good movies.
If childhood would be a color it would be… boring, childhood means all the colors.
Bucharest is the perfect place for… graffiti and rascals
I have a weird habit of… painting the city. For me it’s not that weird, but for others is.
3 artists that inspire me… The Holy Trinity 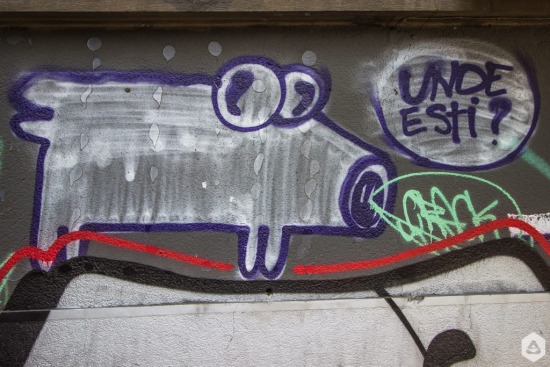 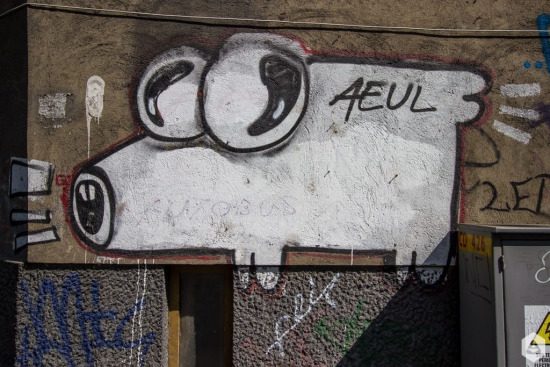 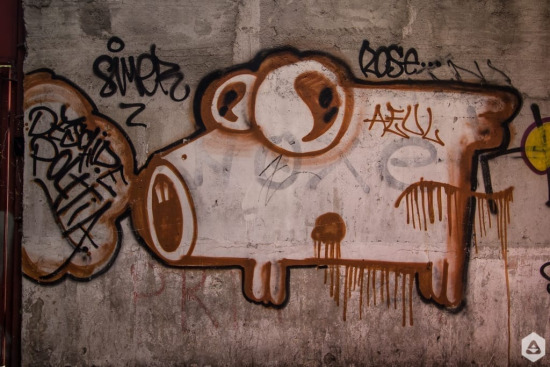 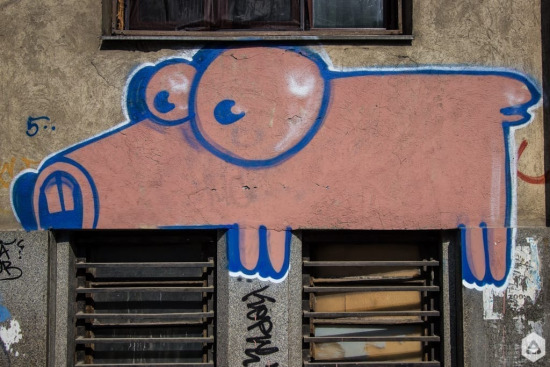 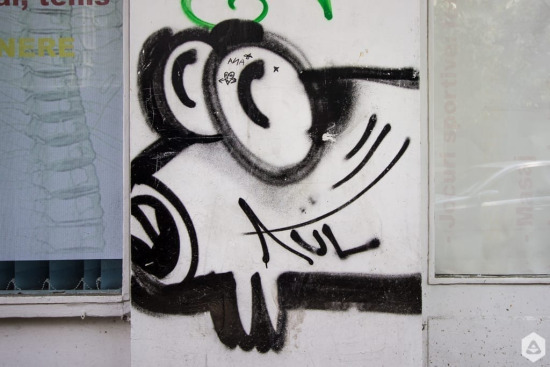 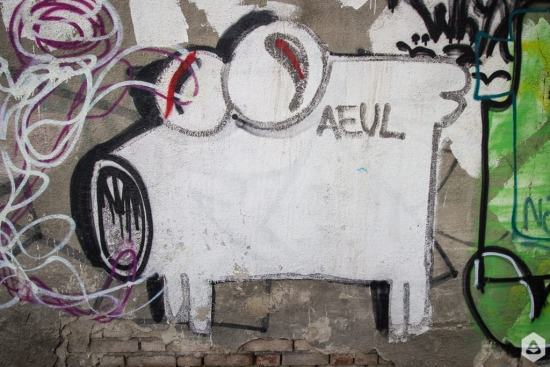 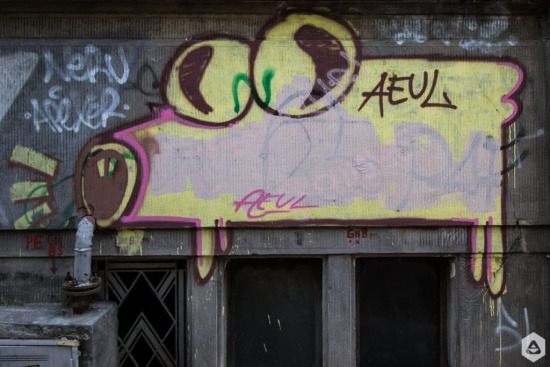 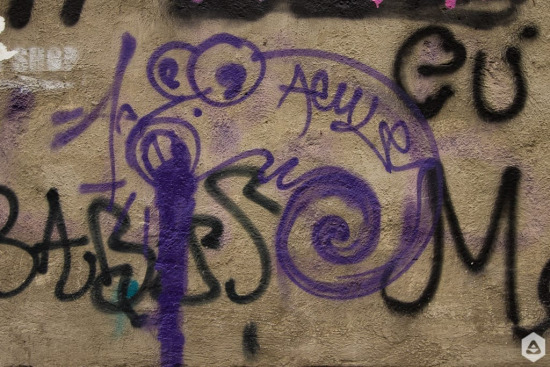 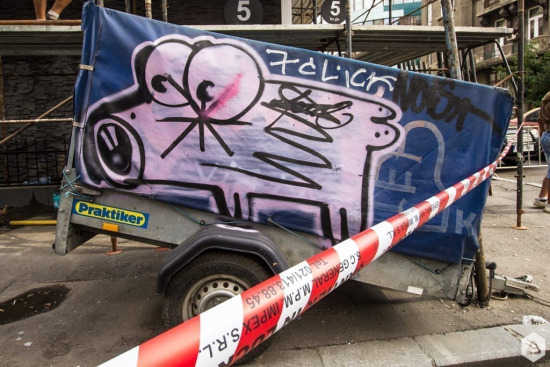 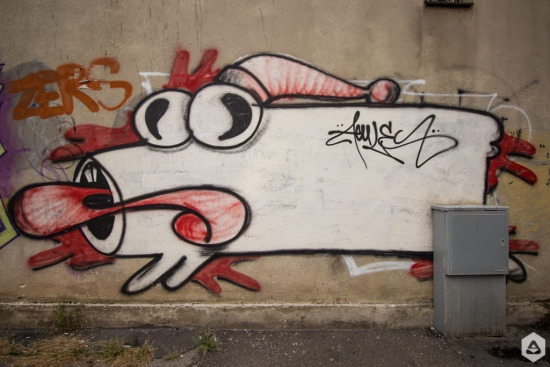 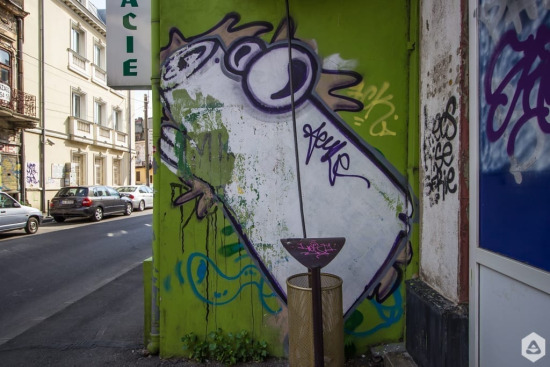 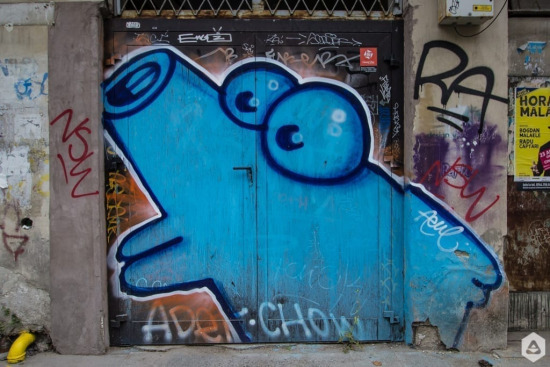 Cristiana Popa: Hello Aeul, we are happy to present the readers an insight in the omnipresent piggy’s universe. What inspired you the choose drawing as a tool for expressing yourself?
AEUL: The simplicity in giving back to people the idea, and more than that, I force  the man to see my idea on a random wall.

C.P.: What is your character’s story? From where it appeared and where it’s going?
AEUL: The character was always there, in the subconscious, and one day it decided to break free, and like any other creature it felt the need to multiply, it wants to be all over, I am more or less an instrument, a decorator of the universe. The universe has the same destiny like ours, just more colored.

C.P.: The places where you draw, what do they have in common?
AEUL:  The places are all crowded, dirty, filled with consumerism.

C.P.: Where would you like to draw soon? What buildings or urban furniture object caught your eye?

AEUL: If there would be enough sponsors in urban art I would draw the whole world. Graffiti everywhere, never ending paint.

C.P.: Buff Monster, Kaws and other street artists, authors of remarkable characters, all use object design or sculpture to produce 3d versions of characters. What do you think about art or designer toys?
AEUL: I think it is a great idea, I would like to make a 3d version of the character. I would be funny 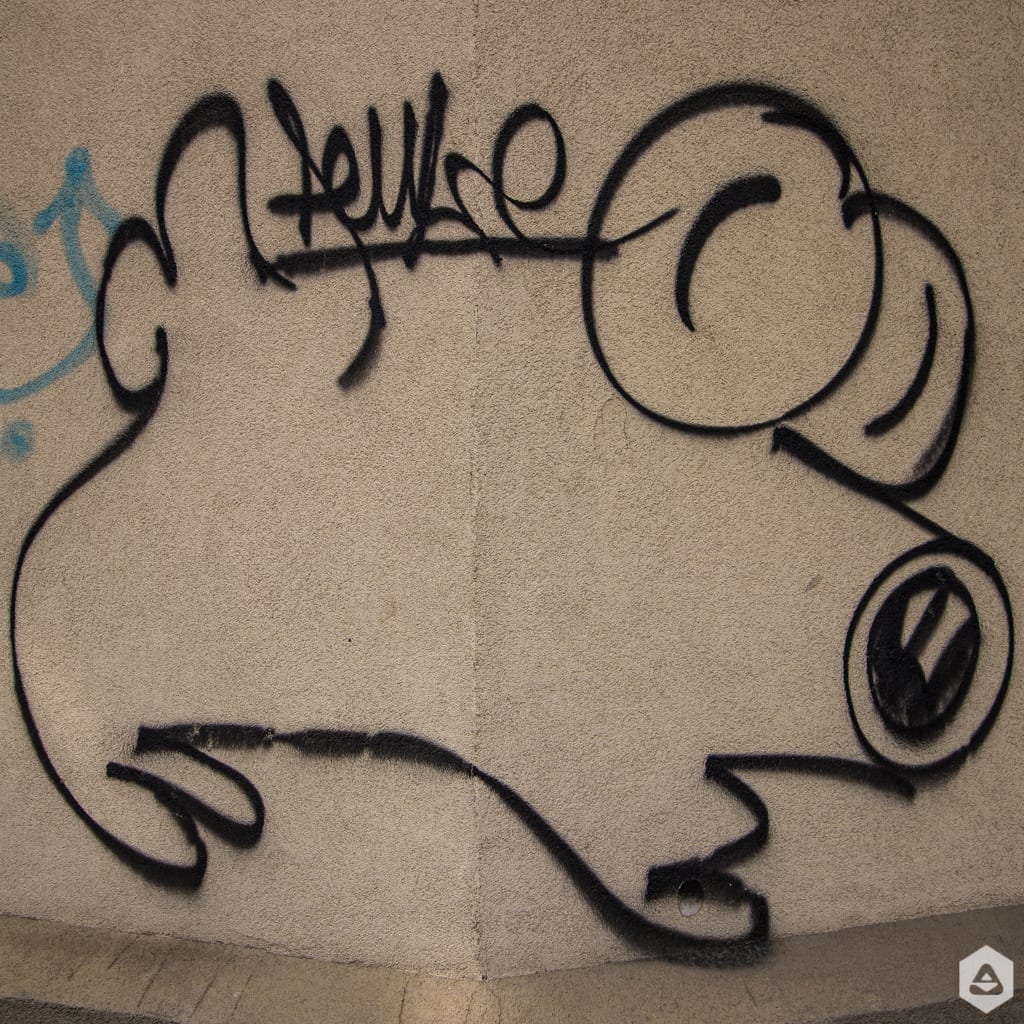 C.P.: Your many works give us some clues that you are an avid explorer. While you where drawing, what did you discovered about Bucharest?

AEUL: While drawing I discovered about Bucharest only sad things, fake people, evilness, poverty, dirt. Bucharest at the night time is pretty dark.

C.P.: With what other areas would you like to experiment?
AEUL: With everything that means creation.

C.P.: How many piggies are there, until now?
AEUL: I don’t think anyone counted them, I lost track around 500. Some disappear, some show up…

C.P.: Actually your letters need more time and paint that the piggy (which I think looks more like a puppy). What is your work process, in this case, and over what work phases you never skip?
AEUL: I always check out the place, I study the movement and if it is a good place to „strike“(draw) I start working.

C.P.: When was the first time you visited feeder and why?
AEUL: Honestly I first saw it after you contacted me. I wanted to see what kind of subjects you write about, what interests you have. After which I accepted the interview.

🛒🎟 Hurry Up! Get 16% off your entire order by 25th of February using the voucher code: feeder16