The graffiti and street art community always had super colorful and bold characters. We met Irlo in 2003 in Arad at a graffiti session. Over time, he developed his style into something unique and very personal and almost anyone who is passionate about the urban culture at least knows his name. More on Irlo and his perspective in the following… 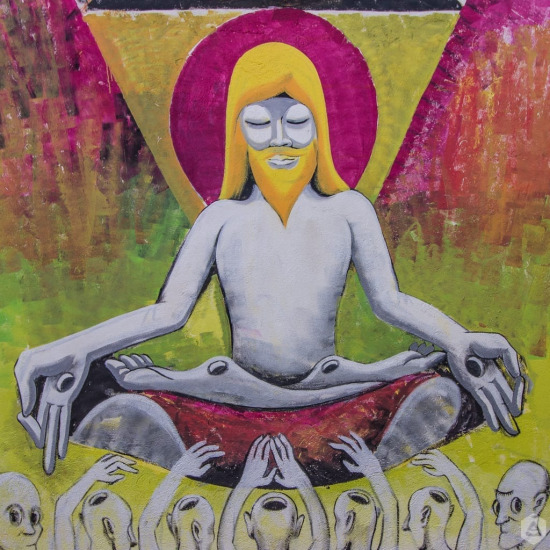 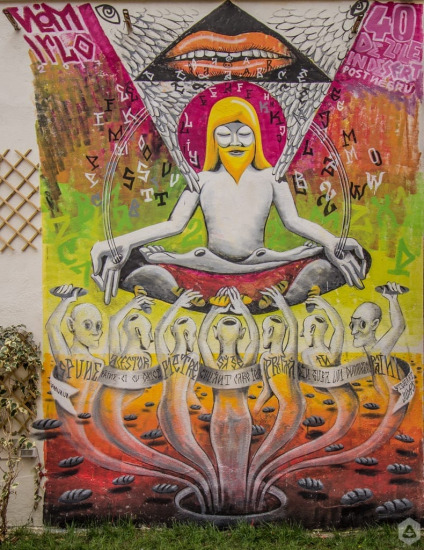 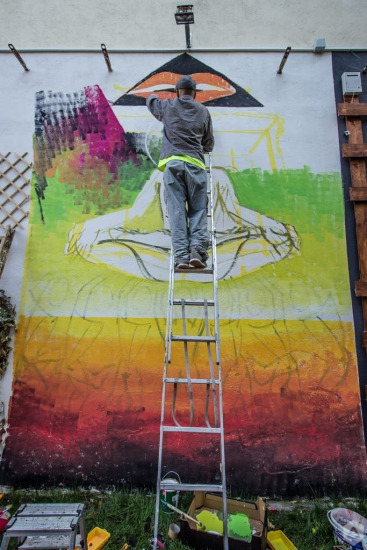 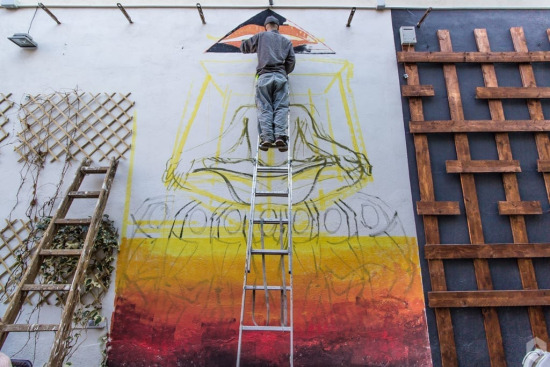 The name, “Irlo”, comes from… Lori which is short for Laurențiu.
The most fun thing would be… to become imortal.
From the griddle at the traditional cutting of the topknot… the griddle.
My opinion of the word “art” is… it looks good.
Tomorrow I intend to… start again a new life.
Because… I was born in Romania, I want to… do work here.
For me, beautiful is… what God likes.
Divinity in my life manifests… sometimes. In the rest of the time, I can hit my head so that I’ll learn what hurts.
Because of the drawing  I managed to… not have success in tennis.
I think that I’m man… growing up. Neon: Yo, Irlo! What’s up?
Irlo: Yooo. A non-stop party all the time. We are kinda happy. Why is that?

N: I’m glad we have a little public discussion on topics with which we often encountered. You’re known as a street artist, but when we started we were all graffers, a kind of “furculision” quite generally applied. Before 2000, in Arad you signed yourself Seco, and at some point, you changed your name, right? What did that mean, other than more letters?

I: I wasn’t really a graffiti artist but those were the early days so I polished letters for some years in Arad but towards the end of high school and after moved to Timisoara I got bored. I also discovered what was going on internationally with street art and I could not help it. I rarely miss the letters, the tags I miss more often. The name, I believed, had to be changed so that I could detach myself from the past. 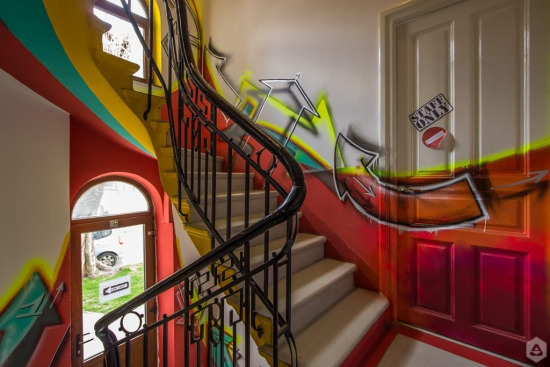 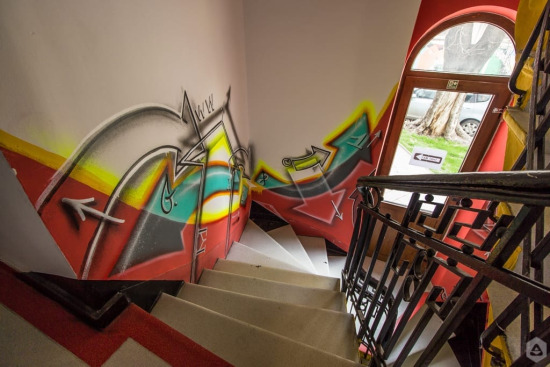 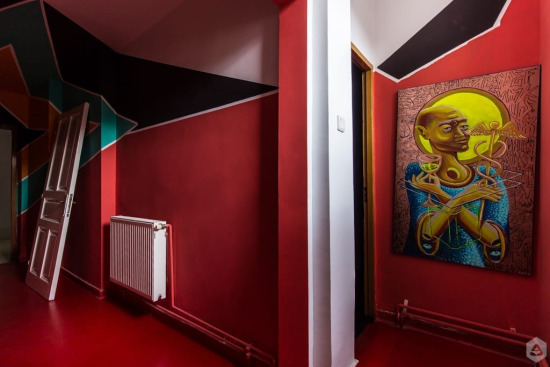 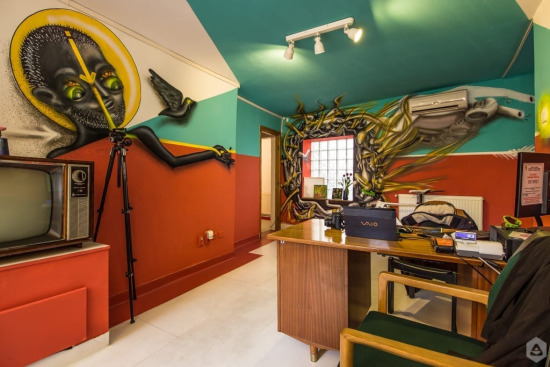 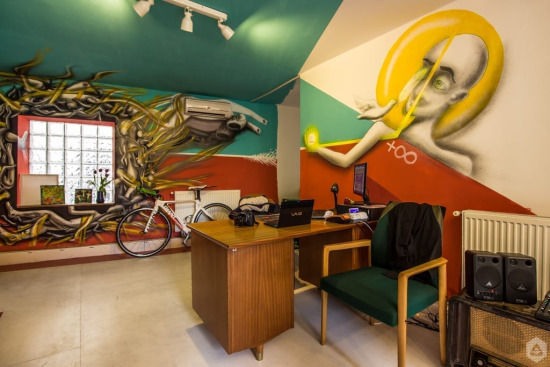 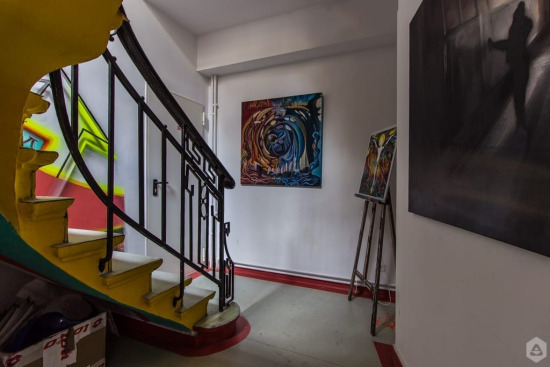 N: Though you keep walking, you somehow settled in Bucharest for some time. What made you stay here and what keeps you busy in the Romanian capital?

I: Ufuaaaaa. I divorced Bucharest about 3 times saying I’ll come back just for business. When I tell God my plans, he laughs, you can imagine.

It took some to realize that I love Bucharest. The people in particular, they are magic. Plus the scene here is already spinning.

Everywhere else in the country, it barely started. Here projects of all kinds come together. I almost don’t have to look for them.

N: I was thinking… the letters you use, some elements are inspired by Romanian folklore, sacred geometry and what else? What do you like to draw lately and where do your ideas come from?
I: “Where do thoughts come from?” – a big question. I admire much a character who until he was four years old, he never spoke. Among his first phrases was that question. Based on it, I came across another child with the same concerns. They say that they already exist and we can or can not receive them and based on the frequencies we find all kinds of areas. For me personally, some of those related to Romania and the occult dominate because I have faith that something very big is here and it still cannot be seen.

N: What are the working techniques that you mastered best and on what surfaces do you like to draw the most?

I: Definitely walls and clearly as big as possible. Small doesn’t really attract me anymore. I do canvasses and even those I make them at least as big as the door so I can get them in and out of buildings. Very rarely on paper, only when someone wants a sketch. 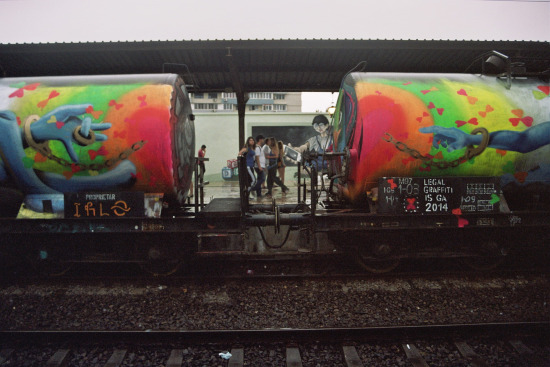 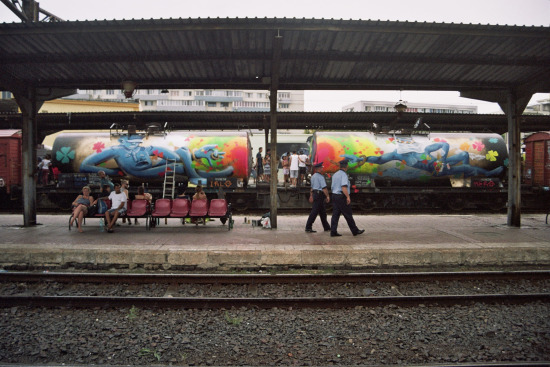 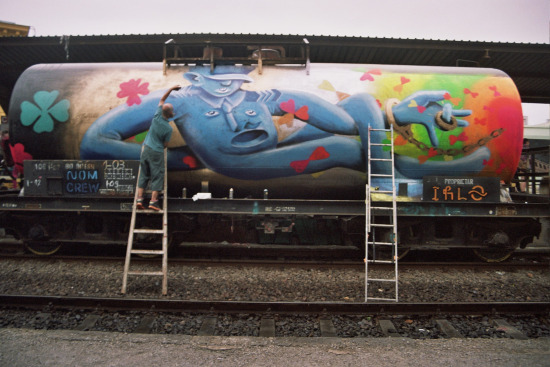 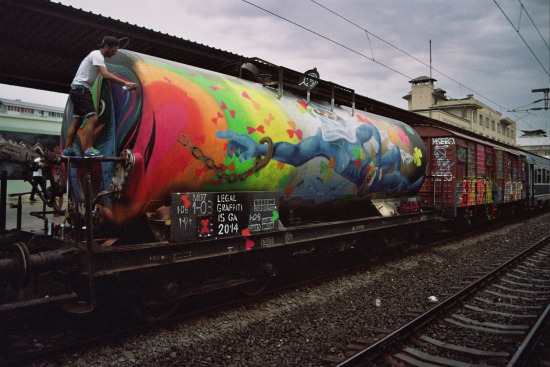 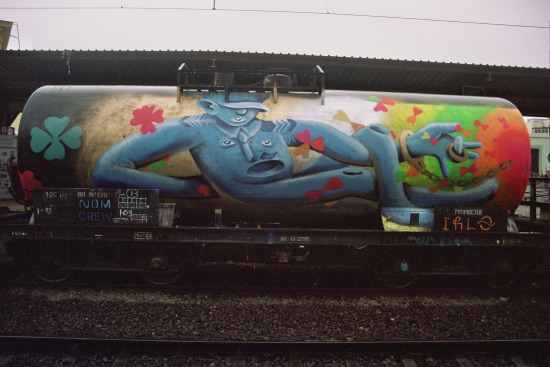 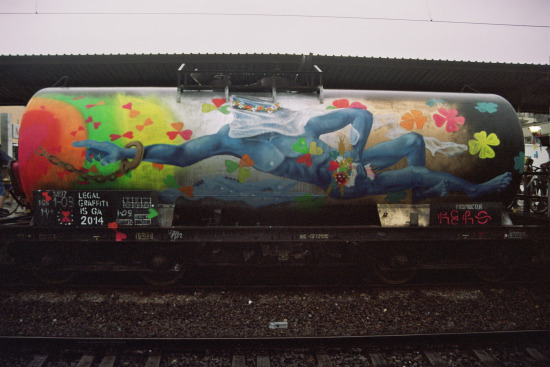 N: Do you have certain rituals or patterns in the creative process? What is behind your drawings conceptually and how do you not become boring or monotonous about it?
I: I do not know if I’ve not already become boring. I work quite unscheduled. Often I adapt on the go. There are leitmotifs I believe, the color I treat about the same always. I would not say that I have already found it. I’m still searching.

In the next period, I would like to simplify the image, to take towards as little as possible, but to be just enough.

I remember fondly the “secret” that my painting high school teacher told me: the important thing is to know when to stop.

N: Speaking of the market, I know that you found a painting that you were missing, for sale at a fair. I found the context funny, would you like to tell us more?

I: Funny and not so. There are two exhibitions of mine that were sequestered by the landlords because they didn’t receive their rent. I didn’t know that, so I left them too much at the landlords and they disappeared. One of them, the cutie, ended up at the fair at Valea Cascadelor and then at Obor. It was kind of a myth until I found it and I had a good laugh. The man who was selling it didn’t understand. I told him that I made it and that I would buy it, but I didn’t have the money. And it remained there. Maybe it hasn’t been sold yet.

N: How do you relate to everyday society from the perspective of a freelance artist?
I: I would like to be a hacker.

N: What about magic?
I: It depends. It’s both black and white. It depends on who uses it and how. The biggest wizard I think is Jesus but it’s inappropriate to call him a magician. He said everything he did out of the ordinary, we can do as well. Even more, but we lack faith that we can. So I would say that magic is faith.N: What was the first impression that you had about the site Feeder when you discovered?
I: I was addicted from the first dose.

N: What is the plan for the next winter?

I: A house near Cluj, stove fire, painting, meditation, love. But if you make plans, God will laugh again.