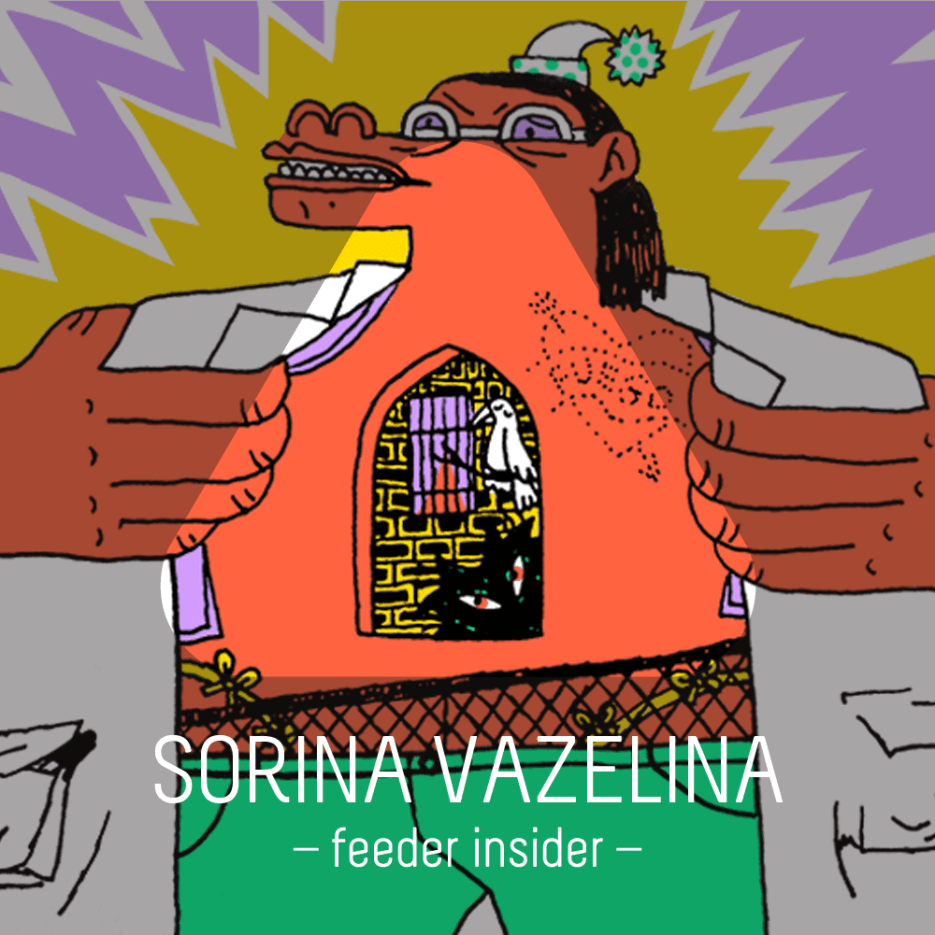 Sorina Vazelina is a freelance graphic designer, illustrator and comics author. She works on interesting collaborations, like INTERZIS, a comic book describing the life of former drug addicts in Romania, Aooleu, a newspaper entirely hand-drawn, Neobservat, where one can see through the eyes of invisible people of Bucharest. Besides this, she brings color and personality to journalistic investigations on theblacksea.eu, VICE and Scena9 through her illustrations.

A place in Bucharest I always like to come back to… The Laborator Propriu pastry shop from Amzei.
Thursday evening… I’m almost always at my computer. When I was 22-23 years old I was going to Ota.
The best investment is always in… books, although I always borrow them and lose track.
Recently, I learned that… Hokusai was a nomad, he changed almost 100 places to live. He had about 30 pseudonyms, I think.
If I could travel in time… I would go to the paleolithic age to learn from the fathers of art.
Creativity is for those who… don’t sit idle.
If I had a superpower… I would be a germ that eats plastic.
When I think of childhood… Cartoon Network! șotron (childhood game), Toate pânzele sus! (Romanian book and TV series), get inside, come eat, the vacations in Ardeal, Go Planet!
3 artists that inspire me… Daniel Clowes, Saul Steinberg, and Mihai, the homeless man who used to do oil painting sometimes.

Vlad Dumitrescu: Hello, Sorina! We’re happy to talk to you for the feeder insider series. Tell us more about the beginnings of your activity. How did you realize the importance of drawing in your life?

Sorina Vazelina: Aloha! I was pretty confused before I realized what I wanted to do. During 4th grade, I would see myself as a nun, archeologist in the 5th grade and after that doctor, psychologist, fashion designer and finally I finished the graphic design section of the Arts University of Timișoara. During college, I worked for Synopsis Media, then It’s Everyday and finally solo.

Drawing was always there, it was like a shadow that went through all my urges. I don’t know why, but I doodle since forever, on books, desks, for friends, for classes, for clients, because I can’t find another hiding place.

VD: In your description at Scena9 we find that you are one-half graphic designer, one-quarter illustrator and a quarter comic book author. Are these proportions constant during your career? If you could add one thing to this whole, what would it be?

SV: I’m a very chaotic person so the notebook remains the only thing that is always there, the rest is in a constant fluctuation. The proportions from the description at Scena9 are more for hydration, not for information. 🙂

VD: In time, you collaborated with people from different domains: musicians, entrepreneurs at the start of their career but also with independent publications such as Aooleu! or Hard Comics. How did you change your approach according to each person or theme?

SV: I can’t tell if I changed my approach according to each collaborator. From design, I learned that my goal is to find visual solutions to communication problems so I do that on every project.

The techniques vary depending on how I can outline the subject more efficiently, but I didn’t discover a magic formula. Sometimes I get the impression that to have multiple personality disorder is a job requirement in the graphic domain.

I can get stuck sometimes, I can’t decide if it is better to work with a vector, nib or just directly in Photoshop… it’s easier in design, though.

VD: For neobservat, a project that rediscovers Bucharest from the point of view of regular people, you made 3 maps of the city, which are distributed free at Anthony Frost. Whad did message did you want to send with your maps and how do you see the neobservat project in the future?

SV: Neobservat, with its maps, was supposed to show a Bucharest beyond the centre, the insane traffic, the rush, the tension and cramped blocks. The maps are a starting point and are not complete, they should be marked by every person with their familiar places. There is data aqquired by the team members along with information gathered while on the route. There are mistakes, mostly mine. There was from the start too much idealism in my head. Without the support of Arcub or the patience of the collaborators, we couldn’t have pulled this off. During the project, I met the guys from the Alternative Education Club in Ferentari, Dana and Antonio from the Community Center La Stela & Dana, the fishermen at the Văcărești Lake, people who showed us their Bucharest and finally the project could be done. The photos need to be tied to spots on the map, there are a few mishaps in design, for less than 3 months of work there are plenty of variables.

I want to continue the cartography of the places through people, around the country, and I will give up completely on the coordination work.

I am attracted by the combination of text and illustration in comic books. There is a need for new ways of communication, that are adapted to the technological and social changes around us. There are handymen, craftsmen, and creative children that go unnoticed, I would like to help them somehow. Initiatives like Kraft Made, started a while ago towards a similar direction, I hope I can do something at that level in the future.

SV: Interzis started in 2014 when Valentin Simionov, who worked back then at Romanian Harm Network, had a collaboration with a bigger project – Support Don’t Punish. Valentin, who is a comic book fan, had collaborated in the past with Mihai Grăjdeanu for După Gratii, a comic about the life in the Romanian prisons. With Interzis, Valentin wanted to raise awareness about the problem of the legal drugs and the effects they have on the Romanian consumers, in a period in which the sponsorships for harm reduction were insignificant and the HIV virus was spreading at an alarming rate. The problems are the same today and Romania is at a very low level when it comes to health care.

When I get a project like Interzis, I firstly look to understand the problems then I can know in what shape I can make the content.

Together with Vlad Odobescu, from Casa Jurnalistului, we talked with the people from ARAS, with the team and the patients from Arena and I documented the subject on my own starting from the coordinates left by Valentin. Because there was no target audience, we looked for visuals cliches that captivate the reader’s attention. For example, in Vindecați sau Condamnați, I use the corny formula of an action comic to bring to life the idea of the anti-hero Nixon in the anti-drug war. In Studii Etnobotanice, a comic influenced by Joost Swarte, we made the characters based on the stories of the legal drugs addicts from the Arena Centre (close to Matei Balș Hospital) and on the stories from some friends in Râmnicu Vâlcea, Bucharest and Constanța. In Studii, the number of characters was tightly connected with the exemplification of the effects of the legal drugs and the bias that says only people who are uneducated and with a poor social background get to be addicts and marginalized. In short, after I identify the problems, I look for intriguing visual formulas and new angles.

VD: You are a graphic designer and you made the packaging for the new bottles of Dinescu’s Wine. Tell us about the experience of working with a wine brand. In this context, how do you see product branding in Romania?

SV: The collaboration with Dinescu’s Wine came out of the blue and it grew organically. It was a period in which I learned a lot of things. Grigore made serigraph labels, Atelier13 cut them with lasers, together with Masha Dinescu I chose the cardboards, the typographical approach, the printing methods. It was a constant dialogue, a ping-pong match of ideas.

Many of our proposals didn’t see the light of day, among them there is also the machinery with which Grigore made serigraphs of every bottle. I made models in which Dinescu’s poems spread throughout the whole surface of the bottle. I won’t find collaborators so receptive soon. I think many entrepreneurs don’t have “cohones”, as Milos Jovanovic would say.

The problem remains: it’s easier to stay in the safe zone with solutions that were digested by others, the market is volatile, there is no visual education, so many people stay inside the box. I wouldn’t do branding again, it’s full of professionals and I never had the expectation to be an expert in a domain. I like to study if I have open-minded collaborators.

VD: You constantly make comic books and illustrations, and in November you had an interesting speech about creative fantasies at Creative Mornings. You said there that you consider yourself a product. What kind of product do you want to be? How would a commercial for Sorina Vazelina sound like?

SV: I am product tested on humans, “calibrated grease, a constricted vision”.

VD: You collaborate with Scena9 and recently you illustrated the story of Cumințenia Pământului. How do you think the readers perceive the visual articles in comparison with the ones that have just text?

SV: For the article with Cumintenia Pământului, I wasn’t convinced by the news story with the sculpture, what attracted me was the story that Andra Matzal made about the sculpture and the life of Brâncuși. People don’t have time anymore to read long articles on any subject. I think readers look for shortcuts, they prefer the sparkling pills which dissolve in time after they don’t have it in front of their eyes. That’s just my opinion, though, everyone is different. If I can’t make things that captivate me, I can’t expect other people to spend time with them.

VD: Describe for us the years spent in college. What do you think of the classic education in comparison with the auto education you get as an artist?

SV: I went to colleges where the professors motivated students, they pushed them from behind with references, creative freedom, and various workshops. I went to universities where some professors were only holding the students back and the “kissasses” were appreciated. If you can’t learn by yourself, you are going to college for nothing. The school of life is difficult, graduates keep coming, there are professors who are geniuses, classmates of all colors and some useless professors. Auto education is the creme from an eclair, practicing protects the calcium.

VD: Feeder.ro is for 13 years the news agency of the alternative nation and represents a bridge between artists and their public. How do you think has online media influenced the cultural life in Romania?

SV: I remember I was in college and I went on feeder.ro to amaze myself. There were a lot of events in Bucharest and I thought it was cool someone was getting them all in one place, with the underground ones as well. There were a lot of posters and flyers for parties back then. I still keep posters made by Adnan and Mindbomb. Today the events are being promoted in the most serious way online. If you’re not there, people forget you, the eyes seem to be moving in the digital environment. Maybe there is not that much patience anymore, maybe we are more present in the online than off, it’s an ongoing process, with all the pains McLuhan stated.

VD: It was a pleasure!

SV: For me too, hast la vista Burebista!