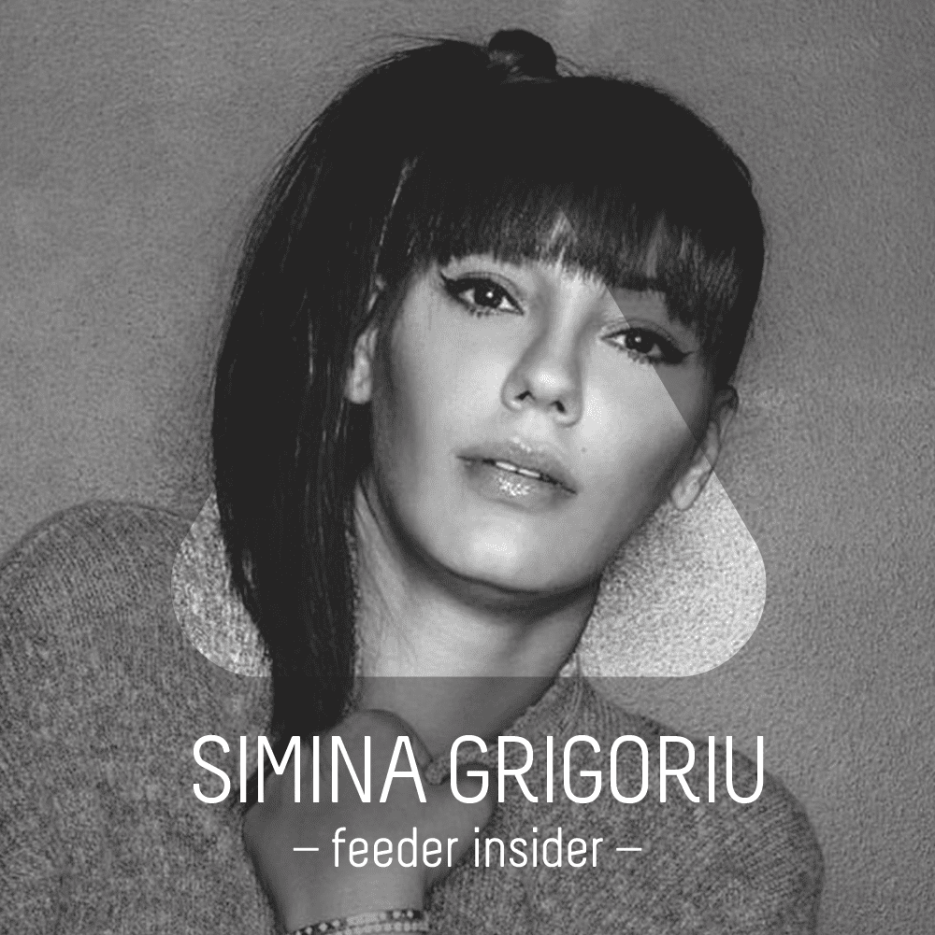 Simina Grigoriu was born in Romania, grew up in Canada and moved to Germany to follow her passion – music. After moving to Berlin in 2008, electronic music really began to be an important part in her life and in 2012 she released her first album – Exit City. From here, everything went on naturally and her release with the Berlin label Sonat Records was followed by releases with Phase Insane Records in Spain, Intelectro Vibe in Italy, Urban Sound and Frequenza. We talked with Simina about her studio, her changing of style the Bucharest and Toronto underground scenes and other interesting stuff. Enjoy.

I never forget to…Skype with my Bunica and Bunicu at least once a week.
The perfect breakfast… Green smoothie on a weekday. Anything McDonald’s after a long night in the club.
A guilty pleasure…Bravo TV and all the shitty/superficial reality shows they showcase. I will only watch this stuff on tour. Never at home. It’s like mindless poison, but really entertaining!
I recently discovered that…our little daughter actually understands Romanian! We live in Germany. We speak Dinglish (Deutsch-English) at home. I sprinkle in Romanian where I can and we listen to a lot of Romanian kids music. And now she gets it.  I am very proud of this. Our little trilingual ninja princess!
The most used app on my phone… Honestly and unfortunately, Instagram.
Home is…Bucuresti, Toronto and now Berlin.
An awkward moment…can be counterattacked with comedy.
When in Berlin, you have to…Try Currywurst. Go go Berghain. Take a picture it a Photoautomat. Eat pastry at Sieberts. Ride the U-Bahn. Drink a Berliner Kindl. Do some touristic cultural stuff.
3 tracks that moved me this year…

Simina Grigoriu – Techno Monkey (Original Mix) Kuukou Records – this is like my second baby (first track off my label)
Philip Bader – Reaction (Original Mix) FORM Music – Just amazing on the dancefloor!
Alfred Heinrichs – Raveheart !! (Original Mix) Supdub – I loved the original so much I decided to remix it! 🙂

Vlad Dumitrescu: Hello, Simina! We’re happy that we can talk to you on the feeder insider series. You recently launched Shook Up EP on your label, Kuukou Records, which contains your track – Shook Up – and 4 reworks from Animal & Me, Autotune, Julian Wasserman and Original Peter. Variety is key and there are different approaches to the same track, but what do you think is common element in all of them?

Simina Grigoriu: Well, the common element are my remix stems! Ha! No, seriously, each artist has brought their best to this EP. All tracks are distinctly powerful and that is sometimes rare among EPs with so many remixes. There’s usually a “favourite” but this time, I genuinely love each of the tracks and find myself able to play them at different times in my set.

VD: You took classical violin and keyboard lessons in your early childhood. You changed the style in high-school when you began rapping and finally you got into electronic music. That is quite a ride. How do you think these different genres have influenced you over time?

SG: Everything I’ve ever listened to has impacted me in some way or another. I sample bass lines from grunge and percussion from hip-hop. I have turned basic guitar samples into melodic splashes like synths. I use it all. All types of samples from all types of genres.

In fact, my track “Ponytails” from 2010 has a blatant sample of Maria Tanase’s “Un Tigan Avea O Casa” from, like, 1940 or whenever the original was released. I like to give tribute to my Romania.

VD: You released at labels such as Sonat, Frequenza, Urbansound and others. In 2012 you launched your first album – Exit City. In all these years, what do you think changed about the way you create tracks?

SG: I started to look at music in a different way. I have worked with other producers since then and now I actually have my brother, fellow artist, Moe Danger, as my sound engineer. I have learned from others and have let my ego down. There is always a way to improve. As a person and as an artist.

VD: During your pregnancy, you had the chance to spend extra time in your home studio. Tell us a bit more about that. What gear can we find there and what do you use most often when creating a track?

SG: I use many VSTs as opposed to analog hardware and I’m not ashamed of it. I am a DJ first and have since learned to evolve into a producer. I don’t need more than my Macbook Pro, a MIDI controller and some keys. I use an AKAI APC Key 25 to lay down melodies and other than that my nose is in my computer. Mastering is always done using analog machines. Digital holds no ground here.

VD: Speaking of that period, you said that you changed your style – you went a little darker in your approach. How has the reaction been so far from the public?

SG: I’ve always felt a divide between the music I play and the music I produce. I am so much harder on stage. My productions have always had melodic undertones with some hard lines here and there. However, unable to travel to gigs during my pregnancy, I found myself sitting in the studio and creating new and exciting sounds.

The result is that I now produce exactly the same sound as I play. And since I also play a little harder now, too, my dear fans have embraced me and the music I choose to showcase. I don’t exist without my fans. Thank you for your continuous support!

VD: This year you started your own label – Kuukou Records and you already have four releases, congratulations! What are your plans for the future – both long and short term?

SG: In a nutshell: New releases on Kuukou by both breakout and established artists. Label stuff. More label stuff. A record coming out on FORM Music in January. New remixes for awesome artists and other labels. Tour. Studio. Diapers & Dinners & Lots of Family Time. I’m still very new to this job as a mom and even newer to the job as a label boss. Trying to get in some studio time while being there for my family all while being away on weekends is challenging, but my life right now is about trying to get it all done and done right.

VD: You said that you have a passion for Japan. What is it in their culture that fascinates you? Do you have any plans for future collaborations with Japanese artists?

SG: I have long been fascinated with Japanese culture. I find the attention to detail and diligence in across many elements of their culture extremely artistic and beautiful.  I am a citizen of the world but when I went to Japan I fell silent with admiration.

Kuukou means airport in Japanese and aside from just sounding cute, it’s totally appropriate considering how much time I spend inside these concrete buildings waiting for take off. It felt right.

VD: This spring you visited Cluj-Napoca in Romania to play at Delahoya – the oldest electronic music festival in our country. How would you describe that experience? Are there any plans for visiting Romania again?

SG: Oh this was a great experience. I was there to play for the festival but also as a regional judge for the Burn Residency. It was not easy and I felt that everybody did a good job. After all, they were the top five Romanian finalists. I got to know the Delahoya crew and I played a dope techno set. I think they liked it. As for visiting Romania, I am there quite often but usually for family. We visit our dear Bunica every couple of months and I love that Isabella can get to know Bucharest, too.

VD: You studied marketing at university. With the internet taking over, how do you see the role of marketing in today’s underground music scene?

SG: Today is all about social media. That is marketing at it’s core. I’ve seen artists rise as a result of grass roots marketing on social media and have also noticed artists such as ZIP and Villalobos — who seem to have no social media presence — remain legendary in their own right. IG and FB are the first places promoters look to see your following as well as to check out your music. Without being an established artist, promoters rely on these channels to determine whether or not their party will actually be sustainable. With so many electronic producers these days (anyone can download Ableton and get to work) it’s crucial to create some kind of entity — first of all with your music, then of course your look/branding etc. — in order to separate yourself as an entertainer. People are checking Instagram more than actual websites for info sometimes. If this is the direction it’s going, it’s no wonder people are taking advantage of marketing on these popular channels.

VD: Your life has mostly been split between Toronto and Berlin, but Bucharest also played an important part. Obviously, Berlin is known for its techno scene, but what can you tell us about the Toronto and Bucharest scenes at the moment?

SG: They are both growing! Toronto is showcasing more and more techno and the underground scene has blown up to full-on festivals in that city. Bucharest is fantastic and has been a hub of electronic music in Romania since the first beat dropped. With clubs like Kristal and Martin, Space back in the day, too of course, a lot of young people became interested in electronic music and the scene has also flourished there. Now, Sunwaves is one of the most recognized festivals and I am so proud of how my home county has established itself as a top destination for quality music.

VD: You played pro bono at a party where the organisers raised money for refugee children. In what ways can artists influence or help humanitarian causes?

SG: I believe that any public person has some responsibility to the people who are listening. We can be the voice of those who can’t and doing so is a great and noble act. If you believe in something and have the ear of others, why not  use it to it’s greatest potential. Personally, I am not a hardcore activist. I do, however, stand up for my rights and I believe in helping others and giving what you can.  Sometimes a little goes a long way.

VD: Feeder.ro is the alternative nation’s news agency, online for 13 years now. What similar sites are there in Canada or Germany? How important do you think is independent media nowadays for the underground scene?

SG: I love your site and appreciate that you are providing a portal to users with similar interests. I’m not sure with which other sites I can compare feeder.ro, but I hope you keep on doing what you do. Keep up the good work!