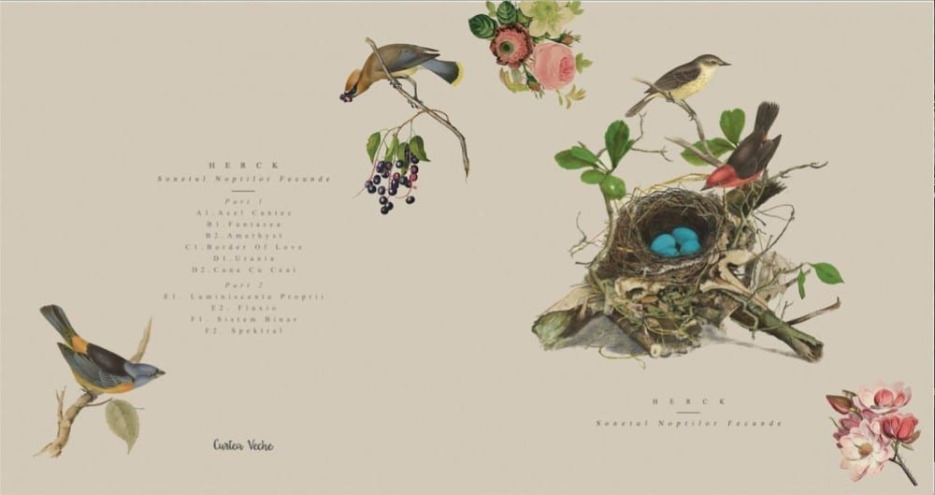 Herck is slowly starting to make a name for himself and it is without any doubt that his first LP – Sonetul Nopților Fecunde – is an important stepping stone in his career. While he previously released at labels such as Tzinah Records, Mood 24 or Natural Rhythm, for his debut LP he chose Curtea Veche, a two-year-old UK vinyl-only label which has been constantly releasing good music.

If it works, don’t change it, they say. Herck did just that and more: Desdemona, his previous release, was a big success and was played by Petre Inspirescu. So for the LP at Curtea Veche he remained true to his style, but added a different layer of deepness to his productions. Early support from Raresh, Cap, Sepp, Nu Zau and others confirms the quality of the tracks on this release.

Acel Cantec is the first track and we delve right into the action with this one: some fascinating guitar chords, a thriving bass line, and the vocals are mesmerizing – we can hear the whisper of a man and the laugh of a woman. It makes you wonder what will come next.

Fantasea goes deeper and when the powerful bass line stops you can hear an array of sounds that work together wonderfully to create a complex and alluring track. The keywords here are: relax and enjoy the music. It has a blissful effect overall.

Amethyst is a violet variety of quartz used in jewelry and it was believed that the stone protected its owner from drunkenness. Well, it’s safe to say that you won’t need any alcohol to feel good if you have this track around you: rolling grooves, some absorbing vocals and when that bass kicks in your feet will start moving, for sure.

Up next is my personal favorite: Border Of Love has that special something. Everything works great together, all the elements blend in to create a lovely journey but the thing that truly encapsulates its beauty is the female voice. It is a powerful but blissful one and it enthralls you instantly.

Urania and Cana cu Ceai take a more serious approach and are just the thing for closing this EP.

The first part of this vinyl-only LP comes out in January so stay tuned!