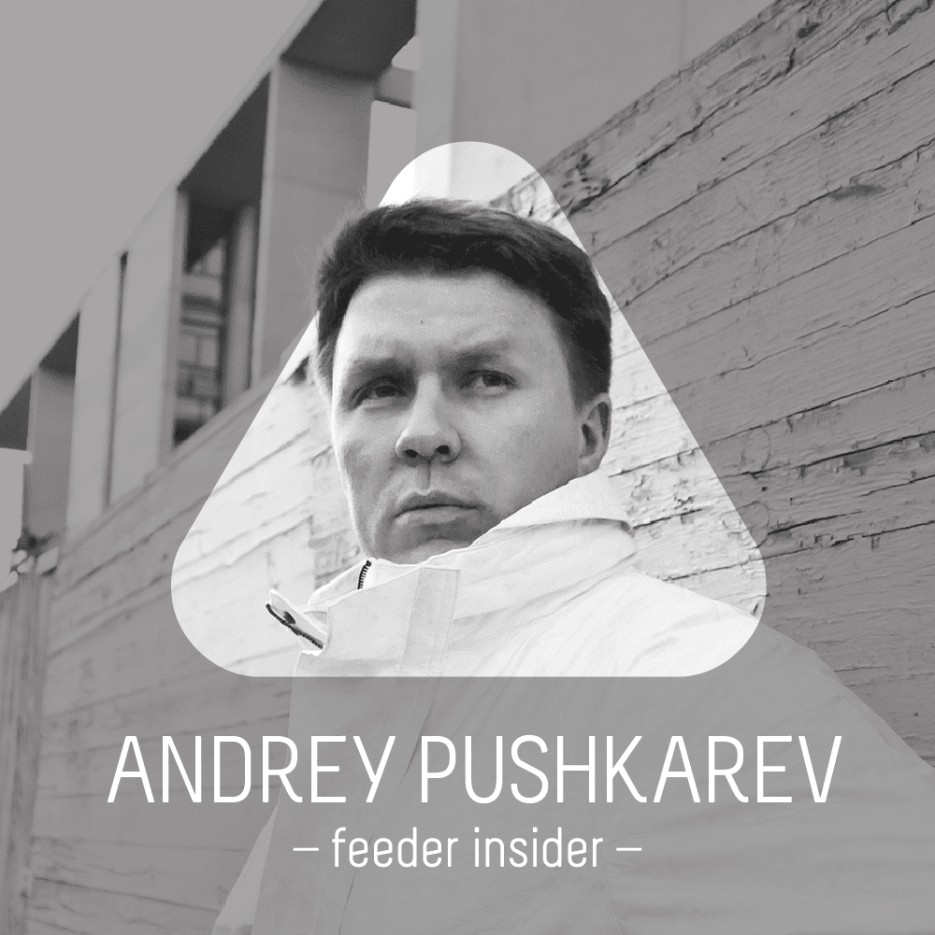 With over 7000 vinyl records in his collection, Russian DJ Andrey Pushkarev is always ready to party. The subtle charm of his mixes encourage a reflective, ruminative headspace; a sound which focuses on creating moods, all the while emphasizing the human aspect of music. He may not like to be in the spotlight, but he is one of the most respected figures in the international underground scene.

This year marks the 20th anniversary of his career and in this time he has visited Romania numerous times creating some memorable moments be it at the beach at Kudos Fest, the opening of RTS FM or pulling an all night long set at Studio Martin Bucharest. The connection between the Romanian public and Pushkarev is a special one so two spots on his anniversary tour are reserved to Bucharest (21 October at Press House) and Cluj (9 December). We caught up with Andrey to talk about the Romanian public, the techno scene in Russia and other things.

In the winter, I always like to… take a walk in a forest.
If I look out the window now, I see… a lot of beautiful trees and a nice house.
When travelling, I often… take pictures.
On a Wednesday afternoon, you’ll find me… probably in front of my laptop.
I recently discovered that… fasting is useful
One of the most intriguing meals I ever had… a traditional South Korean soup which I had when I played in Seoul – I can’t remember the name though 🙂
My laptop wallpaper is… mountains at night and sky with stars.
The perfect vacation… Iceland. I will visit Reykjavik on October 28th  for a date of the tour and will certainly try to get a first feeling.
I always wondered… how New Zealand looks like. It is in the list of places I look forward to explore and I try to not spoil the wonder with information found on the internet.
3 of the most used vinyls in the last 20 years…

Vlad Dumitrescu: Hello, Andrey! It’s a pleasure to talk to you for the feeder insider series. After an astonishing 20 years as a DJ, you’ve collected well over 7000 vinyl records. It is impressive, to say the least, but having so much material to choose from, does it make life more difficult or easier? How many of them do you carry with you for gigs?

Andrey Pushkarev: Hello Vlad, thanks for having me here. Well, let’s say, it depends. Recently I moved from one apartment to another and clearly it wasn’t that convenient 🙂 Regarding touring, if I am traveling only for a weekend one record bag is usually enough (that’s about 65 vinyl). If I am on a month-long tour or playing all-night-long sets I need at least two record bags – and I try to bring from 100 to 120 records.

VD:  The documentary Kvadrat, filmed also in Romania amongst other countries and released in 2013, explores the realities of techno DJing with you as the main character. It’s been 3 years since it’s been released, has your life changed from what we saw in 2013? Do you think that people’s perceptions on the DJ life have been changed by that documentary?

Andrey Pushkarev: The main idea behind the project was to show my reality as it was when the movie was produced. Things have slightly changed now: I can count on many friends when I travel. I guess the documentary offered another perspective of the dj life and consequently changed its perception but this was not the main purpose of the movie.

VD: You said that in 1996, in your hometown, you had only one club with techno music and surely the scene has evolved in Russia with clubs like Arma17 or Rodnya having international recognition. What are, in your opinion, the factors that made this progress possible?

Andrey Pushkarev: I must say that my native town is more like a village for the Russian standards, especially if compared to Moscow, and probably this is also why there was only one club. As for the evolution of the underground music scene, I believe clubs that started flourishing in the Russian capitals in the 1990s are now as good as their Paris, London and Berlin counterparts. There is no traditionally established music industry or strict rules but there has been always a collectively felt necessity to create something new. I guess also factors like the advent of the Internet and the more relaxed geographical mobility towards Europe and US smoothed the circulation of ideas and music – this probably had an impact on the evolution of  the Russian clubbing culture.

VD: You said you draw your inspiration from nature. How does it influence the way you play or when creating a track?

AP: I feel a strong connection with nature since I was a child. Only there I can find inner peace and unlimited source of ideas.

VD: 2016 marks the 20th anniversary of your career and we would like to congratulate you on that. Looking back, what was the biggest challenge you had to face? What advice would you have for a young DJ at the start of his career?

Andrey Pushkarev: Thank you, Vlad. And after all these years I would say that the biggest challenge was to keep things going because there were moments in my life when I was considering to quit the DJ career. As for the pieces of advice, I am not the paternal type of person but in the last few years, I have been asking myself the question: what would I do if I had to start to be a DJ from the scratch. And to be honest I still have no clear answer to this but I believe that if you really enjoy what you do, life will guide you. Just never give up and stay true to yourself and the people around.

VD: You celebrate this marvellous achievement with your Northen Lights Tour that takes you to so many interesting places like Zurich, Philadelphia, Lyon, Rome and others. Giving your impressive record collection, you surely are prepared for this kind of tour. What were the highlights so far? How do you like life on tour?

Andrey Pushkarev: All the gigs occurred until now were great. The response was very warm  and positive. I truly appreciate the people joining the events and the promoters supporting the project. I am thankful to everyone involved in this tour and I can’t wait to cross the Atlantic Ocean to see my friends in North and South America.

VD: On 21 October you will be playing at the Press House in Bucharest and in December you’ll be heading to Cluj at Club Midi. You visited Romania many times now, including a special all night long set at Studio Martin back in 2014. How was that experience? What do you think are the elements that make you have such a strong connection with the Romanian public?

Andrey Pushkarev:  Maybe in a previous life I was Romanian 🙂 Since the first time I played in Romania I was amazed by the energy on the dance floor. The crowd’s reaction to the music has been always warm. I guess we share the same vision on how to enjoy the dance floor.

VD: Even though you started DJing in 1996, your first EP came out only in 2013. One year later, Three Roads was out on Circus Company and since then, you’ve been concentrating on the DJ side again. When will we hear another Pushkarev release? Do you plan to produce more after the tour ends?

Andrey Pushkarev: Yes, I am planning solid studio time and starting a label.

VD: You previously said that a massive wave happened in Romania, regarding the techno scene. What do you think were the conditions for this evolution in our country? Can you name some Romanian artists that you follow?

AP: I think the crowd, the unique sound and the country’s more liberal licensing laws (which allow playing longer in clubs) had an impact on the growth of the scene. The Romanian crowd and promoters really support their artists: they would invite international guests but when a Romanian DJ is performing on the national soil or abroad you can be sure that good part of the crowd includes friends and music lovers from Romania.

Also Romanians value and protect their scene – there is a humble feeling in the way the music and the artists are promoted. There was, first of all, an internal consolidation of the clubbing and electronic music culture which then organically reached international recognition. As for the artists who I feel close to, Jay Bliss, Teluric, and Audiotheque come to my mind and heart first.

VD: You said that the underground scene was more powerful and that people were more passionate in the 90s. Why do you think that? What are the key differences in 2016?

Andrey Pushkarev: It was not more passionate than it is nowadays but at the time it was a revolutionary phenomenon – and in every field. Today is the continuum of that movement, it is just different. It is a good time to be an electronic artist and performer because it became a full-time profession with a more structured business and artists have more possibilities to express themselves. Nevertheless, I must add,  competition has increased in comparison to the past.

VD: Feeder.ro is the alternative nation’s news agency for 12 years now. Recently there are more and more media outlets focused on underground house and techno music out there, how do you think has this influenced the underground scene? Do you have similar sites in Russia?

Andrey Pushkarev: People always need to have good sources of information, and independent journalism has a great value for the music culture. In Russia, we have few media platforms but I believe a magazine which could represent the Russian music scene worldwide is still missing. There could be much more 🙂