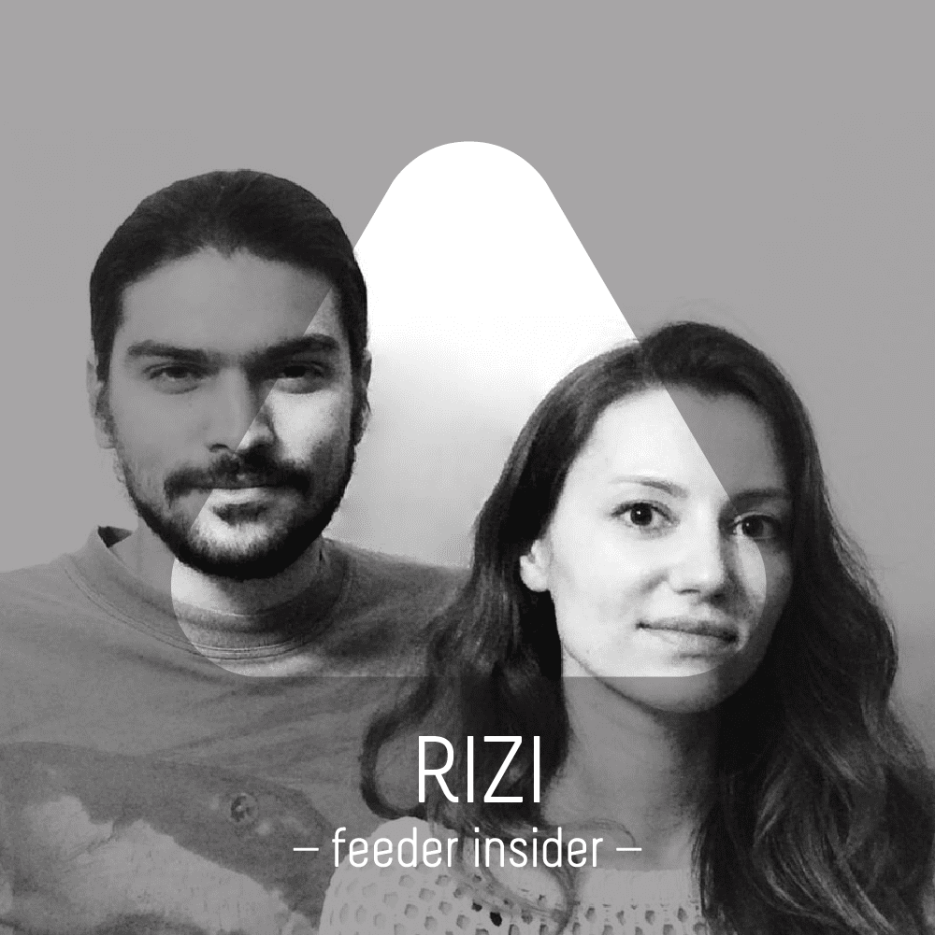 Rizi is a design studio which comes up with online and offline projects and offers custom design for objects, installations, and commercial spaces. The professional interaction between the two main members of the project, Alina Rizescu and Bogdan Ștefănescu alongside the mix of know-how and creativity of the extended team make the world of RIZI one worth exploring. We talked with Alina and Bogdan to find out more about their project.

Nature helps… you feel free.
Tuesday evening you’ll find us… at the office.
Bucharest has become… a very lively city.
Creativity rises… when you’re relaxed.
The last TV show we watched… The Man In the High Castle (don’t forget about the book, kids).
If we were an animated series… Stewie and Brian.
We never thought that… Firea will be the mayor of Bucharest.
The best memory from a summer… Every summer is beautiful. All summer.
My laptop wallpaper… geometry / a picture from the city.
3 design publications that we follow… We follow design publications, art, politics etc but we’re not loyal to one in particular. I think it’s best to have a diversity in the long run and to change as often as possible what you read, as a subject and where it comes from. The only publication we’re fans of is Formaje, but we may be biased.

Vlad Dumitrescu: Hello, Alina! Hello, Bogdan! We’re glad we can talk with you on the feeder insider series. Recently, you projected the second van for Sunday Bagels and Coffee, which now is at Spatiul M60. What is the concept behind this van?

Rizi: Hello! Thank you for the invitation, it’s a nice series. Sunday is a project very close to our hearts because we worked with them ever since they were a start-up and we made the whole design for the brand from logo and packaging to the sale spaces – the custom-made vans. The design for the second van is in the note of the visual identity of the brand – the mix between an American diner from the 50s-60s and the avantgardist polish graphics from the same period. The inspiration came from the story of the bagels – invented in Poland and became popular in the USA. It’s good to see that the things we created have success and that they are evolving nicely, like Sunday.

VD: Using Pier-to-Pier which you created, the people from Someș Delivery came across a very unusual way to get to the other side of the river. What is the story behind this installation? How did you come up with the idea?

Rizi: The project resulted from an idea contest launched by Somes Delivery with a very clear theme – exhibiting the shores of the river Somes, which passes through Cluj. The idea behind Pier-to-Pier came from the need of connection between Cluj Arena and the neighbourhood on the other side of the river, where the distance between the closest bridges is 1km. We also wanted to create a relationship with Somes, not only with its shores. It’s a very cool feeling to stand in the middle of the river, a few centimeters away from the water, to look around – something you don’t get the chance to experiment that often in urban spaces.

Then, we considered that a primary level of interactivity such as a self-powered ferry boat is funny and challenging and it helps people communicate, to play. Pull together and you go faster, I’ll pull and you’ll enjoy the view and we’ll change afterward. Women, children, old people, with bikes, furniture, dogs – anything went on the P2P. It’s a bet we believe we won, judging by the reaction of the people from Cluj and we’re glad. By the way, the people from Cluj are lovely: rarely have we met so many happy people in the same place and ready to get involved at any moment.

VD: You participated at EFdeN, a project where a solar house was built, transported and reassembled in Versailles, energetically efficient and with an energy consumption of zero. How did you go about this project? What attracted you to the project’s theme?

Rizi: We thought it was really cool that this was happening and the determination of the students impressed us, despite the minimal support from any kind of official entity. We participated because of Dizainar who invited Romanian designers to create a collection of objects specially made for EFdeN. We made furniture and lighting objects based on sustainability principles but also inspired by the Romanian esthetics reinterpreted in a contemporary and minimal way. It was an interesting challenge because we had to find the balance between a lot of things: the overall design of the house, the eco approach, the constraints of the producers, our desire to reach simple and pure forms.

VD: You were part of the winners from A’ Design & Competition 2015. You constantly go to contests which many times have a social dynamic but you also have projects for local brands. How do you see the relationship between these two branches of your activity?

Rizi: We are a studio which offers design services for local or international businesses, from start-ups to big companies, so the commercial part is important. At the same time, we think it’s natural to spend time and to put your abilities to use to make the environment you live in a better place. In an optimistic future, but hopefully possible, the social component from entrepreneurship won’t be an exception, but the norm.

If in this process, there are some prizes or contests won, the more the better, we’re glad, obviously.

VD: Atelier Pinion, a place dedicated to people with love of bicycles which you projected, is the first place in the BTLT 2015 poll on feeder.ro. How did you integrate the specific elements of bicycles in your design and what does this result mean to you?

Rizi: The arrangement from Pinion came about from the desire to create a space that can bring together the bicycle community of the city. That’s why we integrated a little from the atmosphere of contemporary cabins and custom objects inspired by the geometry of bikes. We avoided using bicycle parts. We preferred to get the constructive details from the bike frames and create original objects with the metallic structure, sharp angles and slender lines. Meanwhile, Atelier Pinion has extended and it has a garden and a store. This is the biggest satisfaction, to see how a place grows and you participate at every level keeping the original spirit. Otherwise, the fact that it was the first place on Feeder is (another) confirmation that in Bucharest are more bikers than it seems.

VD: You made the visual identity for Alert, a new project that wants to give information about the buildings with seismic risk in Bucharest and the number of affected persons. For who is the Alert map useful and what information does it offer?

Rizi: We made the identity and the design of the Alert platform. It’s an ongoing project which wants to offer existent information in an accessible manner, but, most of all, to put in context and to collect new data. The seismic risk is a very serious problem in Bucharest, and, although there are periodical talks about this, the level of knowledge about its depth is surprisingly low, and the actions are insignificant. The map and the project’s connected activities target those directly affected, but others also.

Rizi: While we were working on the design for the Repad Guide we discovered that there are positive examples in our country, like the restoration of Alba Carolina fortress in Alba Iulia or how the Banfly Castle in Bonţida gradually regenerates following the events organized there. We believe that the economic development and heritage should not be in conflict, on the contrary. A heritage building restored and managed properly can attract financially sustainable activities and people. In addition to the historical architectural heritage, great potential exists in the post-industrial assets remaining after the closing of communist enterprises. There are many such buildings in almost all cities. An inspiring example in this sense is Techmania – Science Center in Pilsen, Czech Republic, who reclaimed the old halls Skoda, given that the city was European Capital of Culture in 2015.

VD: You participated in the Night of the Architecture Studios from this year organised by the Romanian Design Week. How was the experience to invite people into your own studio? How did you connect with the visitors and what subjects did you debate?

Rizi: The house from Popa Petre 23 is generally an open space, where we enjoy the visits of everyone, whether we know them or not. The Night of the Architecture Studios was a nice occasion to do this more officially and more organised. It was very nice to collaborate with the other offices from the house for the installations that we exhibited and to see that the effort was appreciated. All in all, it was an experience we would like to repeat.

VD: You are one of the 11 winners from the Idea Accelerator for Bucharest 2021 where you created Pop-up Event Kit. Where will we find you with the pop-up kit and what does it contain?

Rizi: Pop-up Event Kit is a modular and mobile system with which you can set up spaces for small and medium sized events. In a compact form, it comes as a cube on wheels, which can be carried by an ordinary car and it can unpack in modules from which you can make a stage of 24 square meters, exhibition and visuals panels and 50 multi-functional modules from which you can make all sorts of furniture, structures or something else, depending on your imagination. In September, we went to the PEK at 7 events organised by other winners of the Accelerator: Save or Cancel, Ear to Bucharest, Paradaiz, and Cinty Ionescu.

This weekend, on 8 and 9 October, we are organising two events named Agora Nomadă in which the kit travels in neighbourhoods and transforms itself into a temporary public space which will host exhibitions about the neighbourhood, live drawing for kids, a debate about civic responsibility and the film projection Urban Eye Film Festival. Saturday we will be in Colentina, at the clock from Plumbuita, and Sunday in Titan, at the subway station.

VD: Bucharest ran for the title of European Capital of Culture in 2021. How do you see the cultural life in the Romanian Capital nowadays?

Rizi: Bucharest’s candidature for the title of European Capital of Culture was an interesting exercise and it kind of made the relationship between the administration and the cultural operators better and made some good initiatives possible – like the discussions about the cultural strategy of the city. Otherwise, I think the cultural life is lively and independent, but it still has some rough conditions and for a small public. At a more established level I think things have a big inertia, with good and bad things. There are also very good projects, but we are pretty far from the potential of the city. We think that a natural step would be the extension of the cultural events beyond the centre and that means investing in proper spaces for this. The people living in the neighbourhoods should have easy access to diverse activities. That’s what we’re trying to tell with Pop-up Event Kit.