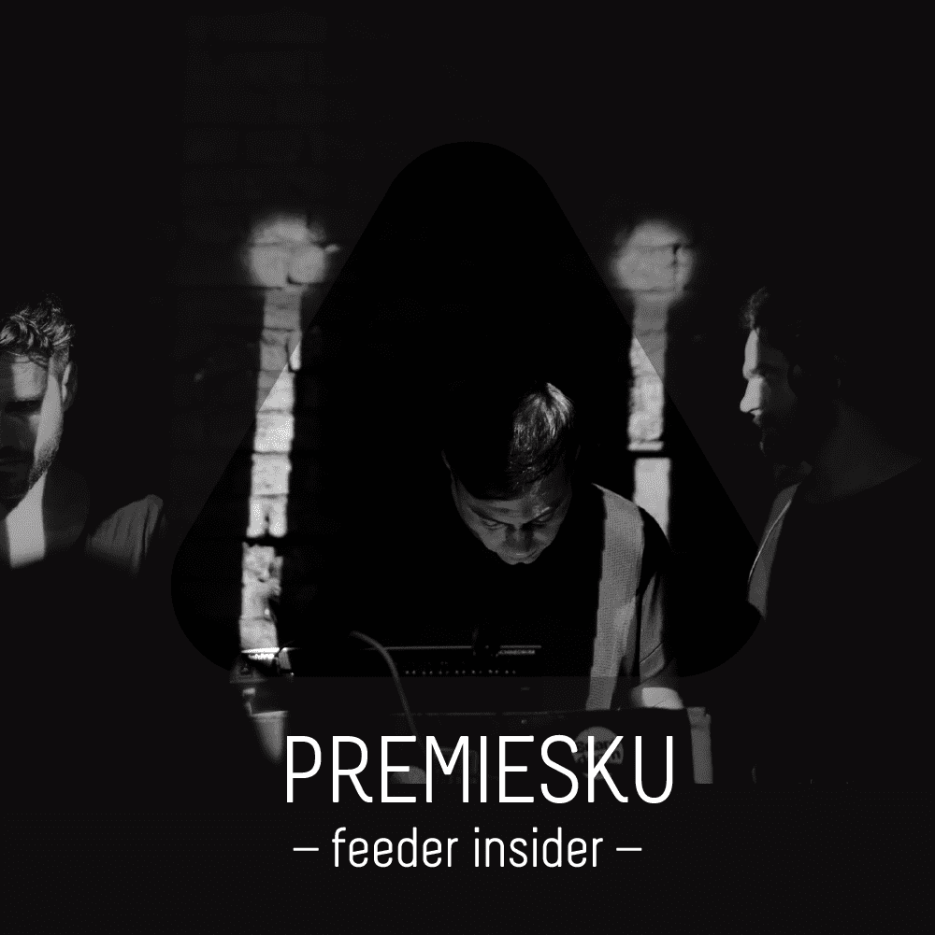 Premiesku, a totally analog live act, without any computers, is something different for the underground scene in Romania. Using drum machines, effect units and synths, they recreate live their tracks from the studio and released on labels such as Desolat, Vakant, 20:20 Vision or Apollonia.

Recently, we listened to a Premiesku set at the first Boiler Room in Romania and we talked with Livio, Roby and George. We found out more about the two releases on Djebali and Desolat, how they modify their gear in order to adapt it to their own preferences and about their future plans.

A habit I have after every gig… I check the mood in the backstage.
If I wasn’t a DJ, I would have… probably followed a career in sport or become a business owner.
The ideal breakfast… All kinds of porridges.
The best sunset I ever saw… Ibiza.
The Romanian film that impressed me the most… Liceenii.
When I was little, I spent my summers… going to my grandparents, doing all sorts of stuff and playing all the possible and impossible games and on the football field.
The first thing that I buy when entering a supermarket… Lemon and raspberry (I make the best lemonade).
The place that I always come back to with pleasure in Bucharest… The National Theatre.
The last time I laughed really hard… While on mushrooms in Amsterdam in 2011 and recently at a Sasha Cohen film.
3 tracks that always cheer me up… Marvin Gaye – Ain’t that Peculiar, Chuck Berry – Johnny B good and any version of Papa Was a Rollin Stone.

A habit I have after every gig… Good music – I dance; no good music – I don’t dance.
If I wasn’t a DJ, I would have been… a film director.
The ideal breakfast… Chia Porridge with fruits.
The best sunset I ever saw… In Ibiza on the west side at Es Vedra.
The Romanian film that impressed me the most… Beyond the hills.
When I was little, I spent my summers… at the mountainside.
The first thing that I buy when entering a supermarket… food for my cats and dogs.
The place that I always come back to with pleasure in Bucharest… Eden Garden.
The last time I laughed really hard… a few days ago with my friends 🙂 #Vobla… they know what it is about.
3 tracks that always cheer me up… any song from Radiohead.

A habit I have after every gig… I get my equipment as fast as possible.
If I wasn’t a DJ, I would have… stomatologist.
The ideal breakfast… fruit.
The best sunset I ever saw… SW xx.
The Romanian film that impressed me the most… Toate panzele sus.
When I was little, I spent my summers… playing football.
The first thing that I buy when entering a supermarket… random stuff.
The place that I always come back to with pleasure in Bucharest… Cișmigiu Park.
The last time I laughed really hard… a few days ago but I don’t know the reason 🙂
3 tracks that always cheer me up… any 3 songs from Depeche Mode. Vlad Dumitrescu: Hello, Roby, Livio, George! We’re glad that you accepted our invitation and the feeder readers can find out more about you guys. Recently, you played at the first Boiler Room in Romania. What was the experience like?

Premiesku: We’re happy that we had the chance to play at the first Romanian BR and we think this influenced our performance as well. The event had an excellent flow from the start to the beginning. The location was very nice and of course, the public was of a high quality.

VD: Up next is a series of gigs in Amsterdam, Ibiza and London. Giving that you play music in such diverse places, how do you perceive the mood of the parties, do you find meaningful resemblances or differences?

Premiesku: Every location is different from another and in each, the expectations of those present are also different, but this is the beauty of it, the places inspire us in a different way and according to each situation, our sets vary.

VD: At the start of January, you launched In My Chek at Djebali, with the track In my Chek being more dance floor oriented with an interesting vocal. At the end of the same month, Altitude was next at Desolat, an EP where we find a more deep interpretation. What made you release them in this small period of time?

Premiesku: In this case, our intention wasn’t to launched them so close to each other, it was the labels decision.

VD: What elements do you think connect you after so much time and so many gigs together? Why do you think everything works better in a team?

Premiesku: Firstly, we are very close friends and we always completed each other musically speaking, in the studio and live. Every one of us has different musical influences that indirectly transpire into Premiesku.

VD: In what way did you modify your gear in order to adapt it to the live acts and sounds of Premiesku? What are the differences between making a track in the studio and recreating it live?

Premiesku: The modifications were in a logistical sense but in the same time also technical. We made some different connections that match our needs during our live act. In the same time, we tried to make them as portable as possible for the airplanes but also very easy to assemble at the booth.

The differences can be very small or very big, depending on the tracks, there are live tracks that are pure improvisations and then we can think about our approach in the studio which we try to reinterpret live.

VD: You have a unique sound which is appreciated and you released on well-known labels – Desolat, All Inn, Djebali, Vakant, Apollonia or 20:20 Vision. We’re curious to know if you plan to start your own label anytime soon?

Premiesku: With Premiesku we concentrate more on the live part and on future releases, we will probably launch a label but it is not our priority. This project is more closer to Livio & Roby.

VD: When you make a track, where do you get your inspiration from? What are the most important elements that you look at when you decide if a track is ready for a release?

Premiesku: We think that we already got our inspiration in all these years of activity, but from case to case there are new sources of inspiration. Because there are 3 of us, each of us has different sources so we have different notions. This offers us a bigger diversity and the music can evolve in interesting directions and then the inspiration follows. The live tests provide often inspiration also.

VD: Your live act is totally analog and it’s what you really wanted. Why is it so important that everything is analog?

Premiesku: Our live act is 100% without laptop and Ableton and you can view it as live PA where the instruments are drum machines, synths, sequencers, and samplers.

VD: A live act with so many instruments means a bigger effort in your travels and a lot of patience at the soundcheck. How do you prepare for a gig?

Premiesku: At the beginning, it was a challenge but in time it all turned into a habit and now it’s really routine.

VD: Your tracks were remixed by interesting artists like Guti or Avatism. What collaborations should we expect in the future?

Premiesku: Currently, we don’t have any collaborations in mind, only our own releases.

VD: Romanian producers prefer to experience with common elements in their sound, do you think this is a positive thing for the underground scene in Romania?

Premiesku: We think that the Romanian music scene at present is pretty coloured and diverse and this is very ok. It’s true that often there are elements that we can find in different tracks, but maybe this is what defines the so-called Romanian sound.

VD: Bucharest is running to become European Capital of Culture in 2021. In what direction do you think the cultural life evolved in Bucharest and what qualities recommend the Romanian capital?

Premiesku: We hope it gets the title, we would be very happy, we think Bucharest would be a good fit for this and every year this city grows. It’s a superb place, very vivid and full of cultural potential. We’re proud to be here.