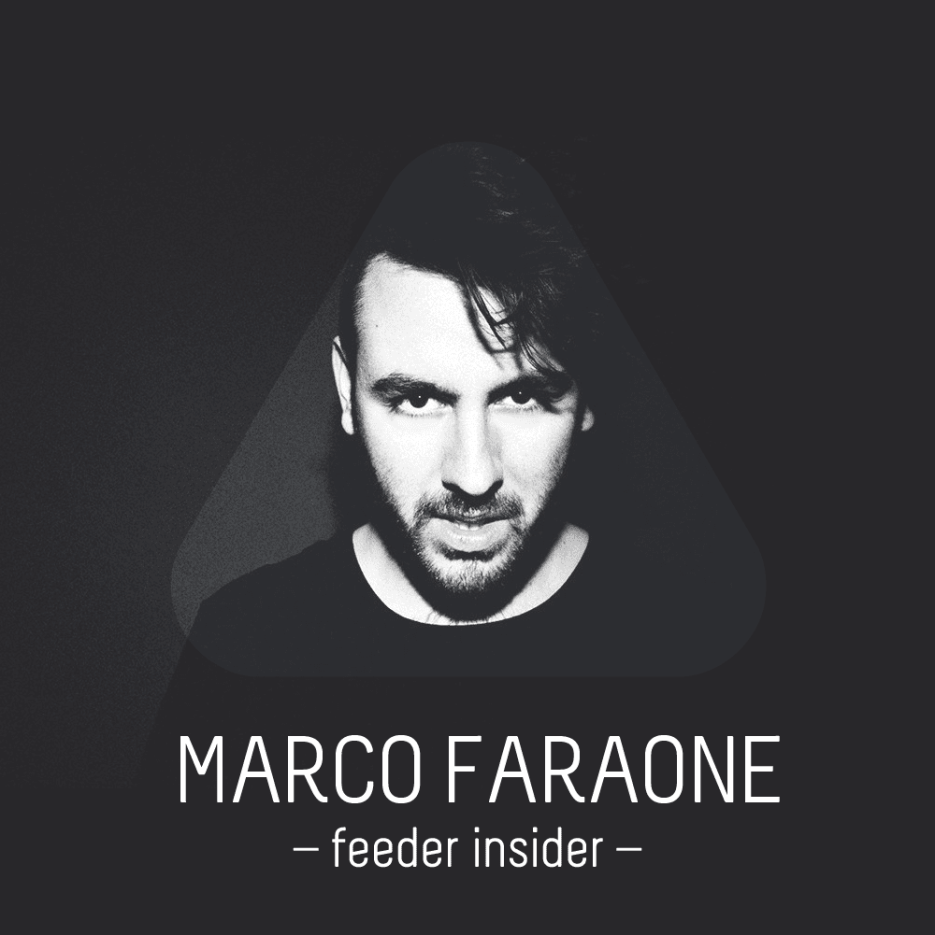 Marco Faraone was always a music man: born in Tuscany, Italy, his father was a DJ in the 80s for a local radio station and his grandfather was a folk singer. All these influences caught up with young Marco and he soon started being interested in hip-hop records such as Run DMC or Tupac and when he wanted something else, drum ‘n’ bass was the way to go. Later, house music entered his life through artists like Masters at Work, Todd Terry and Laurent Garnier.

His first release came in 2008 but his true breakthrough moment was in 2010 with Strange Neighbors released on Matthias Tanzmann‘s Moon Harbour label. Since then, Faraone has been busy. Drumcode, Desolat, Be As One,  Sci+Tec, Moda Black, Holic Trax, Get Physical and Truesoul have all provided a home for Faraone’s productions. Being the resident for 4 years and counting at Tenax Club in Florence, Marco has shown the world that he is also a very talented DJ. We talked with him about his label, Uncage, the Marco Faraone & Friends parties, his gear and the role of media in the underground scene.

Florence has ….. Everything.
My alarm clock sounds like ….. an Italian version of Toy Story.
When I want to relax …. I listen to jazz.
When I think of my childhood …. I want to go back.
If I could travel in time, I would go … To space
The thing that has never changed about me …. My smile and humility.
The best sunrise I ever saw was in …. in my girlfriend’s eyes
3 tracks that changed my view of music…
Nathan Fake – The sky was pink (James Holden remix)
Mathew Johnson – Marionette
Boards of Canada – Reach for the dead Vlad Dumitrescu: Hello, Marco! We’re delighted to have you as a guest on the feeder insider series. Your career has been truly inspiring and you had a springtime tour with gigs in France, Italy, Australia, China, USA and so on. What are the other highlights that you’re looking forward to in 2016?

This year has been so important for me in terms of gigs and releases and in Ibiza for example, I’ll be playing in Space and Amnesia for the first time, both in the same year. I can’t describe the satisfaction to be there. I also can’t wait to play at the UK’s infamous “The Social” festival and Tobacco Dock for Drumcode’s Halloween – sharing the decks with many important artists in the scene. Can’t forget also the opening night of my residency in Tenax in Florence, my home. Summer is almost done and this year was absolutely next level.

VD: The first release on Uncage, the label you founded in 2015, is your wonderful Rotaryknobs EP followed by Eduardo de la Calle – Klassiker Elektronische EP. What is the mission of this personal project and what are your plans for its future releases?

MF: Well, the message of UNCAGE – as the names suggests – is to be first of all out of a CAGE. That means the projects are to encourage and share the message of free expression.

When I opened the label me and my friend -Norman Methner – who’s part of the project – thought from the beginning that one of the first objectivities of the label was to give space to new upcoming and unknown talents releasing together with big names from the scene, like for example Radio Slave. He is the biggest artist we have had on the label until now, who also happens to be one of my favorite producers. On the new 003 (Uncage V-1) – which was released a week ago – we have 4 different tracks by 4 fresh new talents. 2 of them are Italian, one from Berlin and one from France. I want to give the right value to the music on not only to the names who produced it. Music has to speak. We always try to release special tracks with soul, that’s why I always wait so long to press something on vinyl. I absolutely need to be sure about what I’m doing. The next Ep 004 is by Berlin-based artist Pablo Mateo, also known as Wrong Copy, a real talent released on MDR (Marcel Dettmann Records) and underground Lack and Idealist records. His EP will include a very special remix by Nick Hoppner. Something else is cooking for the next one, we shall keep you posted. VD: How do you prepare before a performance? Do you know what are you going to play or do you completely go with the flow? Are you influenced by the time at which you play at a party?

MF: I never, and mean never, prepare my DJ sets beforehand. Of course, I will have in my mind what I would like to play if I know the club or location. Naturally, there is a difference between a big crowd set and an intimate one for around 300 people.

I hate to play the same sets. I really like to be flexible and dynamic as a DJ. This is one of the main reasons I don’t play live sets as you are not able to move from where you have prepared in the studio. Every club has a different feeling, a different crowd, so for me it makes no sense to prepare the set before.

What can do you if you’ve prepared something and it doesn’t work? Just go with the flow, get to the club an hour before you start to get a feel and then see what happens.

VD: In March you’ve had an Asian tour, playing in 4 major provinces of China. How is the Chinese music scene shaping up? What are the differences and similarities between a party in Europe and one in China?

MF: I was very surprised about China, especially the 2 gigs I did in Guangzhou and Hangzhou – the energy was crazy! It’s a new territory to be discovered and it’s very interesting also how they promote the events – in Europe that works differently. As everyone knows, most of the social media platforms and browsers are banned in China, like Facebook, Google, Youtube, Instagram, so they use completely different channels to promote in a completely different way. They have big energy and they’re mind is open for electronic music in the near future. I hope that more things will be happening there soon.

VD: You’ve been resident at Tenax Club in Florence for three years and counting. As an active international DJ you surely travel a lot so what made you stick to this residency at the Italian club?

MF: Tenax is the club where I grew up musically from when I started. It’s one of the places where I had the chance to listen to many of the best worldwide artists and learn a lot from them. I’m very proud to be the resident of the club because that means that they trust me and what I’m doing and I bring the club’s name around the world. I’m not playing much there because I’m traveling most weekends, so I have 4 or 5 spots in a year. But that for me is even better because every time I play there, it is special and people don’t get bored of it and seeing me every week. Every time I play there is a special night to remember. VD: Last year you had a blast at the Marco Faraone & Friends party in Sicily. Surely you must have wanted a repeat this year, what happened?

MF: I love Sicily and it’s the place where I most feel the warmness of the crowd. People really show me love there and this is something I live for. I decided to throw my own event there last year because I wanted to bring something different and some friends to play there and feel that vibe. They were speechless after they played their sets. This year we didn’t throw a party because on the day I was supposed to plan the event, I played at the legendary Amnesia terrace in Ibiza for Music On, invited by Marco Carola and for me it was so important to play there and skip the event. I will be playing in that place very soon though with an extended all night long set. Marco Faraone will happen again for sure, maybe somewhere else with some incredible surprises.

VD: It’s been 3 years since your first event in Romania and one year ago you were celebrating Bummble bit’s anniversary in Bucharest. What did you like most about your visits here? Do you have any plans for a gig in Romania?

MF: I’m planning to come back to Romania but nothing is confirmed yet. I would really like to play in Bucharest, Kristal club – it was absolutely amazing last time! My dream is to play at Sunwaves festival. This is one of the places where I think a DJ can really express himself to the fullest and be appreciated by the people. It’s the perfect combination, I would say.

VD: Do you have a gear setup that you always use for producing or do you change it depending on the situation? Where do you find your inspiration, if there’s a deadline coming up?

MF:  I have too much equipment in my studio. Let’s say that my basic setup is an 808, 909 and a 303. Then I jam on top of them using some other synths like moog voyager, virus, juno 106, nord lead4, arp odyssey and much more. I always use the right synth for the right thing or sound that I need to do.

The inspiration for all my tracks comes day by day – I never sit in my studio and have an exact plan of what is going happen. Nothing is planned and when I switch on my machines, I record all what comes out from them. However, most of the inspiration comes from my travels, my moments alone when waiting for a flight or even in the hotel room.

That is why I sometimes bring a few small synths with me (like the Roland boutique ones), they are very comfortable for travelling and creating a quick idea in that moment.

Of course, I get inspired when listening to DJ’s sets from back in the day. I still remember when I was going to clubs, coming back in the morning or the day after and I was going straight into the studio without sleep, just because I had a fresh idea in my mind coming from the music I listened the night before.

This is what an artist normally does – getting inspired by everything that happens around them. VD: It’s amazing to see how many people want to play and create music nowadays. What do you think is the most important quality a musician must have?

MF: Just be creative and innovative. The music has to speak.

VD: Feeder.ro is online for 12 years now. Do you think today’s online media has a positive effect on the music scene? How do you see it changing in the future?

MF: The media is very important at the moment. Some artists survive because of that and the noise and the hype they have around their name. Some of them don’t even play good music in my opinion. Some are amazing producers but horrible DJs. Being a DJ or a producer are two completely different things and not everyone is able to do it. Don’t get me wrong, I’m not saying that I do both good, maybe one day the selection will take me out of this scene, I don’t know.

But for sure if you speak about the long term, you can have the best media support ever but, first of all, you have to prove to the people that you’re a good artist and they will love you for that. The media is important indeed but, basically, an artist needs essence.