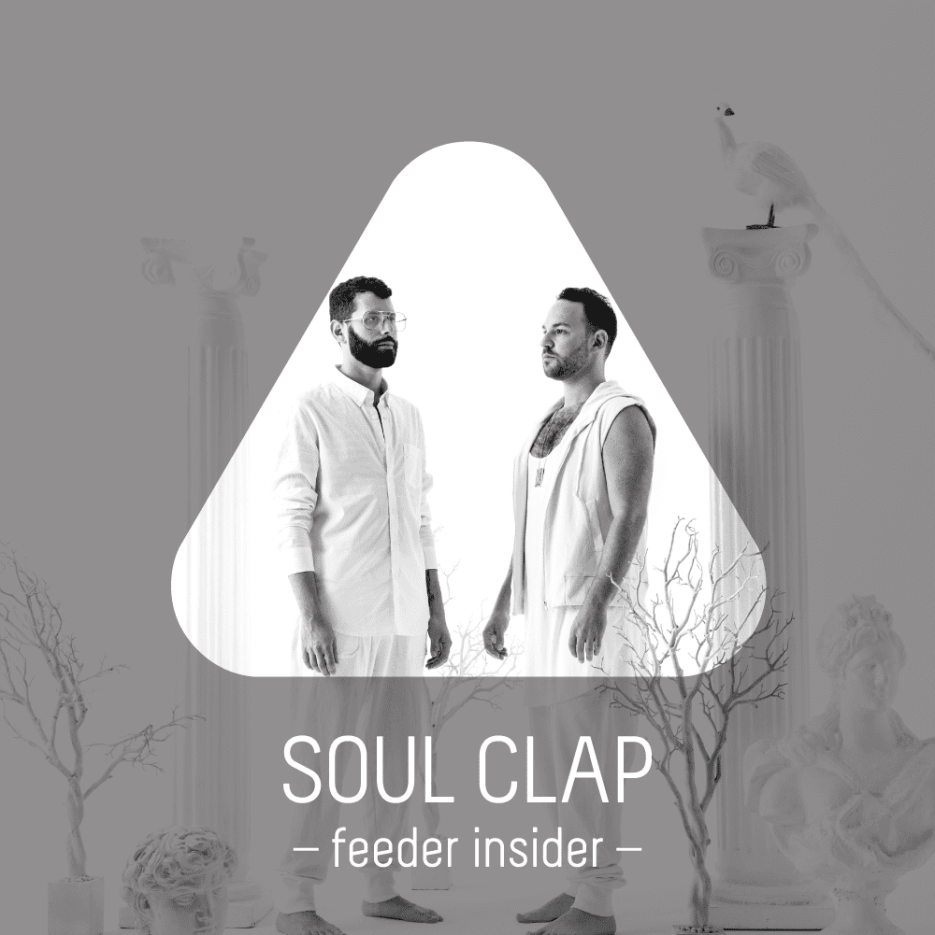 The story of Soul Clap is a pretty simple one: two guys from Boston with a huge passion for music who decided to do this for a living. It wasn’t easy at the beginning; it never is. They had to play weddings, proms or bar mitzvahs but once they decided to go their way, success was only a matter of time. Eli Goldstein and Charles Levine aka Bamboozle and Lonely C started DJing in 2001 and 2012 was the year they launched their first album with huge success: EFUNK. They blend in house, disco, funk, soul, r&b and hip-hop and the BBC described them by saying “they blend neon-splattered nostalgia with a crisp futurism thanks to their experimental production techniques”. We had a talk with the guys so they could tell us more about their new label Crew Love Records, their Boston roots and their new album. Here are the adventures of Soul Clap!

The great white hope is… Larry Bird playing Chess with Woody Harrelson for title of “Master Of The Universe”
Everytime in Tokyo… If You Will Gyoza my Ramen, I Will Nato Your Funky Omakase
On a Monday morning you’ll find us… In that good gentlemen deep REM sleep
The last rap song we heard… Jumpman
Crew Love… Is True LOVE!
If you’re in Boston, you must go to… Anna’s Taqueria of COURSE
The best burger… Is the Michelberger (hotel in Berlin)
An app we use to connect… SocialChess and Snapchat (Soul Clap)
Before answering this interview… I was naked
3 up-and-coming artists that we should keep an eye on…
David Marston
DaviD Paglia
Scott Groove’s Overdubs

Vlad Dumitrescu: Hello, Eli! Hello, Charles! We’re very happy that you agreed to have this talk. The last couple of years have been more Crew Love oriented to say so. You’ve been hanging out with the whole gang and now have another European tour on your hands. How has the life on tour treated you so far? In what way would you describe the European vibe?

Soul Clap: We’re blessed to have a crew of incredible talents and wonderful friends around us! Crew Love Is True Love!  For Soul Clap it’s also been an exciting time as we’re putting the finishing touches on our new second album due out in September. The European vibe seems to vary country by country but there’s no question that when the crowd is open-minded in Europe the night is filled with MAGIC!

VD: Speaking of the European tour, you’re going to play in Romania on 14h August at Spellground Festival. It’s not your first visit here. How were your last visits? What are you expecting now, considering it’s the first time you’re playing at a festival here?

VD: It’s been 8 years since your career as independent DJs really kicked off. How have you changed over time? For a while you didn’t have a stable home, what made you abandon that lifestyle?

SC:  We’ve certainly grown as artists and as people since our career started. There’s been wives, record labels, bar/nightclubs (The Black Flamingo in Brooklyn) and SOOOO many adventures. But in many ways in our hearts we are the same wide-eyed and excited music lovers as when we were teenagers and Soul Clap first started. Regarding living ONLY out of suitcases and record bags on the road, it can be fun for a while but eventually with no home you start to go a little nuts. Your belongings get internationally scattered and it feels like your roots get pulled out of the ground a bit. Now we both reside in Brooklyn in close reach of our collection of Vinyl and SYNTHS.

VD: We really enjoyed Crew Love – Based on A True Story because it can blend perfectly so many styles and each track has its own story and theme from nostalgia to partying by the beach. How did Crew Love Records come to life and what are your plans for the future with this label?

SC: First there was Wolf + Lamb Records, then Wolf + Lamb Black and Gadi’s Double Standard Records. Then when we started Soul Clap Records and Gator Boots it became clear that if we united our forces we could be ever greater! So, with the support of iK7, Crew Love Records was born and will stand as a platform for upcoming albums from our artists. Up next are full-length albums from Nick Monaco, No Regular Play and Soul Clap!

VD: In your sets, very often we see different styles blend in perfectly: house, funk, r&b, soul, hip-hop. At first glance, it probably shouldn’t work, but it does and in a very impressive way. When was the moment you realized that this is your sound? Why does it work so well?

SC: Including a variety in our DJ sets is important because it keeps both us and the crowd interested.

We’re lovers of all types of music, never just one thing. Plus it makes for a more complete night of dancing when there are distinct moments. We’ve always played many styles. When we first met we were already playing hip hop, reggae, drum and bass, jungle, house, techno, garage, disco, funk, jazz. These days we’re the same but just with deeper music collections and more mixing skills!

VD: If we were to visit your studio right now, what would we find? What gear do you use to make your tracks?

SC: If you came to our studio you’d find a lot of TOYS!  There are a few pieces of gear that are really special, but too many to really mention. If you’re reading this and are into synths here’s three to check out:  Roland Jupiter 8, Arp Solina, Arp Odyssey. Bam…

VD: Your set from Studio Martin in 2012 in Bucharest was very different from the one at the outdoor La Plage Club back in 2014. Do you change your style depending on the venue? What, in your opinion, is the best way to approach a festival gig?

SC: With two years in between the shows it’s safe to say the styles would change, just as we change as artists and people. Different venues certainly call for different moods, like you wouldn’t play the same in a dark sweat box as you would outdoors in the sun on the beach! For us the best way to approach a festival gig, especially as a duo is to really narrow the music selection down to a tight body of tunes we know very well and have seen impact the dance floor.

VD: What do you think is the biggest challenge for a DJ nowadays? How has the landscape changed since you started this career?

SC: Things have changed a lot since we started our career. There are many more DJs and producers than ever before and we’ve watched dance music take off the world which we would have never expected in the mid/late 2000’s. The challenges of being a DJ nowadays is most of all the speed with which music is consumed. It seems like the shelf life for new music is shorter and shorter. That’s one of the reasons classic music is so powerful. If a record from the 1980’s still rocks the dance floor in 2016 it will probably do so FOREVER!

VD: How was growing up in Boston like and how big of an impact it had on your sound? What do you think is the most important characteristic of the Boston house scene at the moment?

Growing up in Boston we had to play all styles of music and take all types of DJ gigs to make a living.  Sometimes that would mean a bar, a club, a shopping mall, a wedding, a high school dance. This forced us to open our minds and learn about a lot of music we probably wouldn’t have gotten into otherwise.

It made us better DJs and musicians. These days Boston is in a great musical place. There are more parties then ever before and more producers/artists who are working to get into the music industry. Its a very inspirational time.

VD: Feeder.ro is the nation’s alternative media agency for 12 years, building bridges between the artists and their audiences. How do you communicate with your fans and how do you think the internet age influenced the underground scene?

SC: The internet age has changed the game completely. People now have an incredible ability to communicate and socialize from the farthest corners of the world. You really used to have to seek out the records, parties, clubs, djs, promoters and labels. Nowadays it’s all just a click away, which is so powerful.  The internet definitely helped us let the world know about Soul Clap, it’s an incredible tool.