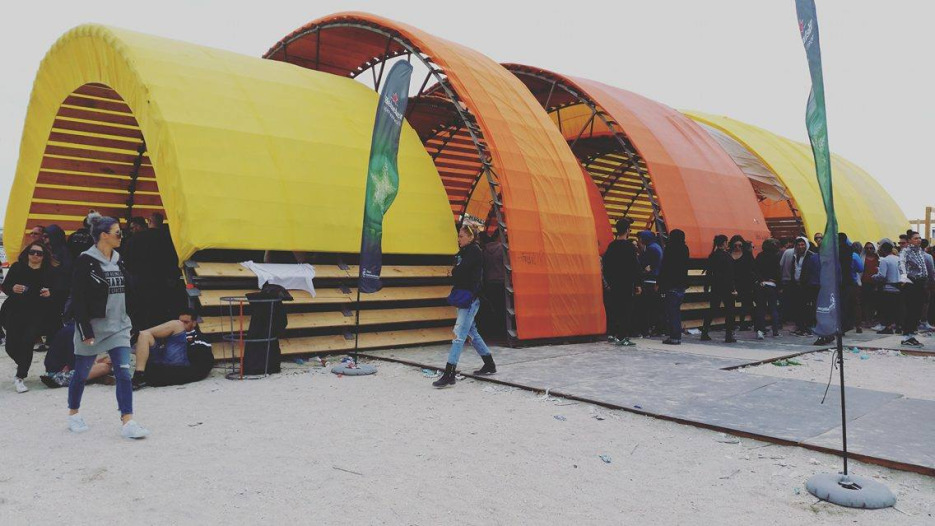 Well, that went by so fast. We went to the 19th edition of Sunwaves, the techno-oriented music festival which is held in Mamaia twice a year since 2007 and where the DJs really have the freedom to express themselves by performing longer sets than at most international festivals. So maybe that’s why tINI and Bill Patrick tried the experiment of a 31-hour set which didn’t go well with everybody. Matt Unicomb at Resident Advisor thought it felt “reckless and forced”. But more on that later, in the second part of this review. We were there from Thursday to Monday and we will tell you about how it went.

When the Sunwaves day and night schedule was announced, we knew we made the wrong decision to book our hotel rooms starting from Friday night. Seth Troxler was playing Thursday night and the last thing we wanted to do was to miss him. So we made the natural decision of taking off to the seaside on Thursday evening even though we didn’t have where to stay. We were up for a marathon, but we made the right call.

A wonderful morning with Seth Troxler

We arrived there at about 11:30pm and Rayo was behind the decks delivering a very appropriate warm up set. What impressed me was that the no smoking inside rule really applied and the security staff made sure no one broke it. Thumbs up for this one. Bas Ibellini was next but his style wasn’t really our thing so we waited patiently for Seth. At  4:00 AM, in a very troxler-ish shirt, Seth took control of the decks and what came next was truly magical. In the first few hours the sounds were pretty dark and techno oriented but once the sun (well, at the beginning mostly fog) came up, his style changed to more classic house and you could see by the way he danced and smiled that he was having fun. It is something about seeing the DJ having a great time behind the decks that makes you feel so good. Probably because you can see that he really is passionate about what he does. This is certainly true for Troxler.

At around 9:00 AM, Bas Ibellini joined him for a b2b and the result was amazing. Troxler was in a great good and classic tunes like Larry Heard’s “The Sun Can’t Compare” were blending in perfectly with the sun that by this time had conquered the fog and made his appearance through the orange tent.

We then headed for the after-hours tent where Suciu and after that Arapu made sure it was pretty hard to make the decision to leave. Arapu playing his newly released track “So Doo” was without any doubt one of the highlights of his set. But since it was 4 PM and we were there for 16 hours already we left to go to the hotel for some rest.

After a few hours of sleep, it was time for a familiar face to warm us up for the master Ricardo: at 12 AM, we were already in the very crowded tent B where Cristi Cons was doing a great job. At 2:30 AM Zip took over but it was a bit disappointing what we heard so we decided to take another break so that we would be in top form for Ricardo. At 7 AM we were back and Villalobos was in great form as always and Zip this time made things only better. Since last year Villalobos finished his set at 4 PM, I was a bit surprised that at 11 AM the tent went silent, but the afterparty that followed saved the day.

We started off with Mihigh and it was just what we needed. After the crazy energy that Ricardo & Zip spread throughout the big main tent, he cooled things off very nicely with some serious techno and it was a well-received change of mood. A perfect blend between the techno from the sound system and the waves crashing on the beach. Up next was Piticu and it was just what we expected. His good mood is transcended trough his mixing and we were soon moving our feet to his more dance floor oriented house and techno set with tracks such as the Ricardo Villalobos remix of “Love is ok” by Sieg uber die Sonne.

It was a lovely afternoon with these two guys and we didn’t want to leave, but at the other stage the Apollonia crew was about to start their set and we didn’t want to miss them. At about 7 PM, the boys were doing their thing and it really wasn’t a surprise that one of the first tracks played was Angels from SIT. I would say it got a pretty good reaction. Will it ever end?! The set from Apollonia was one of the best from the festival and although we didn’t really want to leave, we had to because the a:rpia:r crew were waiting for us in the morning.