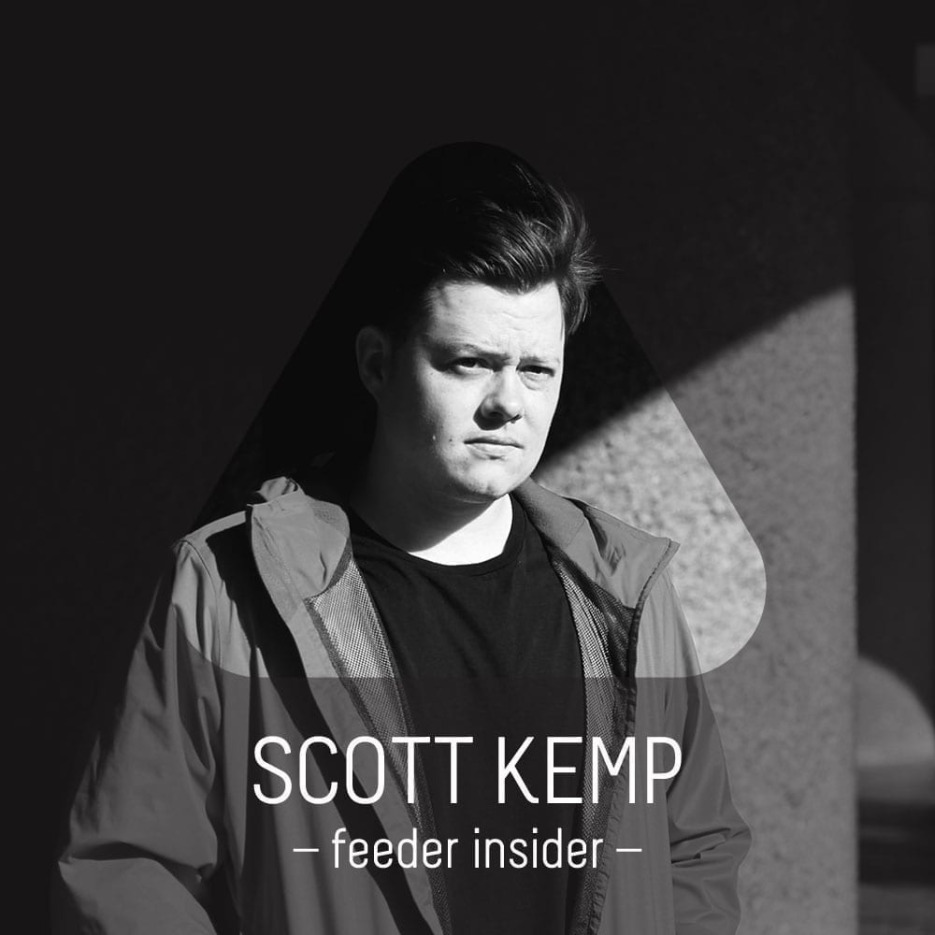 For this episode of feeder insider, we travel all the way to South London to have a chat with the interesting Scott Kemp. He has already a string of releases under his belt, both digital and vinyl, with labels such as mobilee records, Earlydub Records, Deep Tech Records etc. But the project closest to his heart remains LDN Records, the vinyl only label he founded in 2015. LDN has four releases to its name, the latest being a VA which has tracks from the likes of Nu Zau, Lumieux, Zefzeed, VID and the man himself, Scott Kemp.

Given all this, it was pretty exciting to get the chance to talk to this up-and-coming artist.

One of the most inspiring places in London is… Fabric room 1
The last thing I do before going to bed… clean my teeth
I always read… feeder insider
The last film I saw… Ride along 2
I can find happiness in… my family, fiance and studio and some fury small animals
In 2030 we will… be living on Mars no doubt.
The thing I always take with me everywhere I travel… headphones/passport
Friendship is… a great thing never abuse it or take it for granted.
The most British thing about me… my south London accent.
The last 3 vinyls that I bought… Zefzeed Lush EP, Hostom003, Amphia 009-3 Vlad Dumitrescu: Hello, Scott! It’s fantastic to get the chance to have a chat with you. You recently had the opportunity to perform a back-to-back set with Rick Maia at Checkpoint in Barcelona. You were saying that this could be the start of something new. Can you give us more details?

Scott Kemp:  Yea it was a great set as well I don’t usually play warm up sets so it was a chance for me to explore some of the other library of music that I have. I don’t often play b2b with people but it really worked with me and Rick. It was very natural and we bounced off each other very well.

Yes I mean I stayed at Rick’s for a few days after the gig and we got stuck into the studio and ended up making 2 tracks which you guys will see at some point this summer I’m sure. As for start of something new, I mean who knows what might happen but I’m sure you guys will see us play together again this year at some point.

VD: LDN004 was just launched on your label LDN Records. Artists such as Nu Zau, Lumieux or Vid make an appearance on it, how did you connect with the Romanian guys? Will we find the vinyl in any Romanian music stores, such as Misbits or Madpiano?

SK:   Yes, LDN004 has been my favourite release so far for LDN. I have always been a huge fan of this music and the guys on this release are no doubt who I support the most. They are very talented guys as I’m sure everyone would agree. The contact was made with the guys just from passing each other our own music and swapping tracks of our unreleased stuff and the friendship grew from there. As for record stores I’m sure we can fit a few into Misbits for you to purchase. VD: Speaking of LDN Records, it all started back in 2014. How has it progressed so far? What other releases can we expect from you in the future?

SK: Yes, I mean the support I’ve had for LDN, which I still can’t thank everyone enough for, is very humbling and much appreciated when it’s just putting music out there that I love from the artists that I support and think are great. The fact it’s being supported by all you guys is simply amazing.

VD: According to a report by The Association of Licensed Multiple Retailers, half of the UK’s nightclubs have closed over the last ten years. What qualities have made some places continue to thrive in these harsh conditions?

Yes, over the years I have seen many clubs and spaces be shut down which is a real shame as a lot of my friends and I have great memories in some of the venues.

I mean what’s keeping it all going is the real solid promoters we have here who are putting in the time and effort to make the scene continue. The likes of GROOVES LONDON (Laura and Alex) and INTO THE WOODS (Chris and Gavin), these people in my eyes should be awarded a medal for the hard work they put into making these parties happen and to be a part of them is a pleasure especially in these hard times here. VD: Fabric is, without any doubt, the place to go in London for underground parties. But what other places would you recommend?

I mean Fabric is great, I played there in room 1 last year for the WetYourself guys and it was amazing thinking of all the heroes that have been in that booth and that I got to show people what I’m about. It was a great evening.

As for other parties, GROOVES LONDON who I’m resident for put on some amazing parties in some great locations and they’re putting on some great line ups as well. Last Sunday there were Nima Gorji, Brett Jacobs, Zotist, myself, Ted Amber and Leroy Roberts. The entire evening we had the best music.

VD: Do you prefer playing at outdoor festivals or are the indoor underground clubs making you feel like home?

SK:  I’m yet to play an outdoor festival but it really is something I’ve always really wanted to do because I’m so used to the dark intimate 400 capacity venues here in London.

VD: If we were to make a visit to your studio, what would we find there?

SK: Now that would be telling. There’s a lot of great tools in there and it is forever growing which is also very costly. VD: What inspires you when creating a track? Do you have in mind how the track should sound or do you go with the flow? What is that special thing that you’re looking for in a piece of music?

SK:  I think if I have a weekend of seeing an artist play then that inspires me a lot. I never really have a game plan, I just go in and what ever happens happens, that’s why I think my music really differs. The one thing that every bit of music I produce must have is it can sound strange but it really has to connect with me and also the dance floor in order for me to think about releasing it.

VD: Together with Josh Wicks and Cris J you are Novus Soundsystem. How did you guys find each other and what is the element that connects the three of you?

SK:  Yes I mean we have been very good friends for a while now. Chris actually showed me how to make music many years ago now. Josh we actually met at a festival through a friend and since then have become very good friends. We had our first gig as Novus Soundsystem this year for the INTO THE WOODS crew: 5 hours of just playing records and really connecting with the crowd. That night we all had a blast.

But this year I really feel JOSH WICKS is one to watch out because some of the music the guy is creating is pretty unreal. Luckily, we are  friends and i get to play them all. Being friends has its perks.

VD: At feeder.ro we try to establish a connection between underground electronic music events and the people who make and seek them. How did you find out about us? Do you think such media outlets are an improvement for the music scene?

SK:  Totally agree that times have changed from the days of handing out flyers. I think platforms such as yourself and others is what this industry needs because if it didn’t have them, these people would slowly forget about the scene and that can not happen.