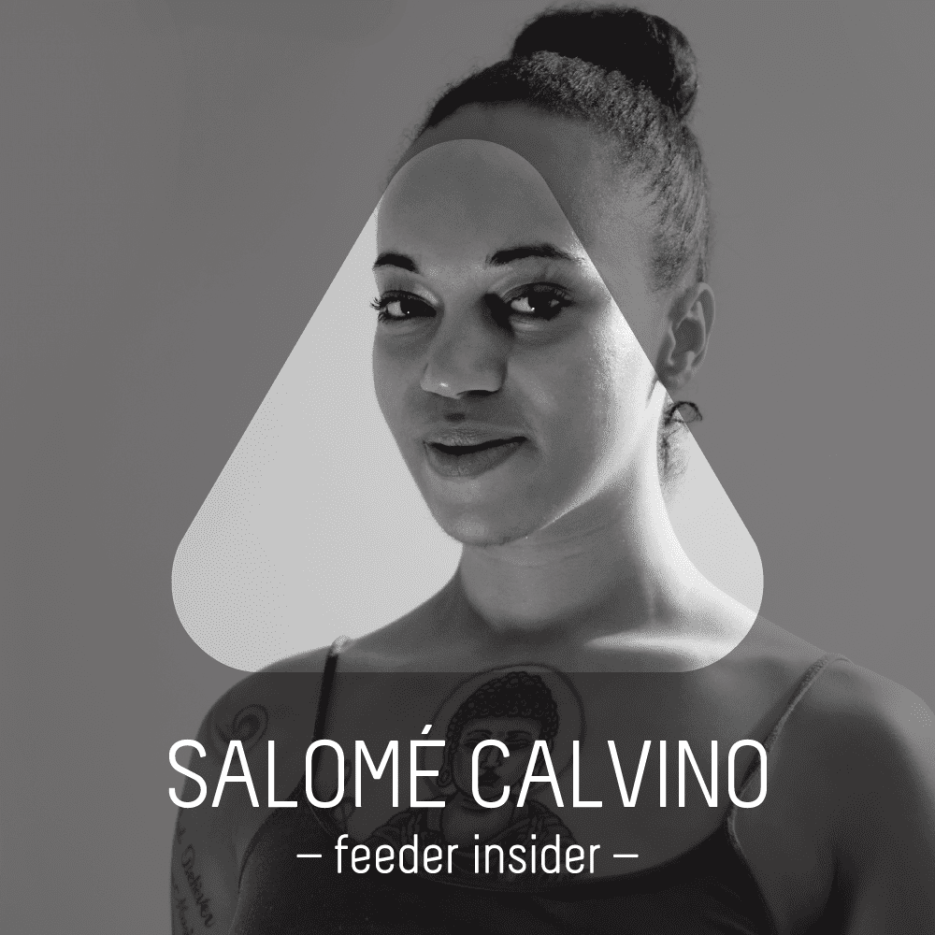 As her athletic silhouette emerges behind the decks and the kick drum starts brewing, you know you’re in for a treat. Turning from the opera stage to the club dancefloor, Salomé Calvino developed quite a knack for surprising crowds with minimal and techno tracks enriched with subtle influences from both her classical music days and her artistic family background. You’ve probably seen this vinyl lover and Romanian sound convert perform live, since local promoters have taken quite a liking to her – as she has to Bucharest. Join us for a new feeder insider episode and prepare to be charmed as well by Salomé Calvino.

My favorite thing to do in the morning… drink tea, smoke a cigarette and listen to a vinyl.
I think that in a past life I was a… lioness.
I love wearing… jumpsuits, so easy and comfortable.
Family is… important.
If I were to star in one last ballet performance, it would be… Kitri in Don Quixote, my favorite role to dance because it’s really energetic.
Vacations are best spent… with friends and music.
A movie which made a lasting impression on me… Samsara, a beautiful movie with beautiful images of the world; made me want to travel everywhere.
My role model… my mum, the most powerful, independent and intelligent woman I know. She teaches me a lot.
Something new I’d like to try… Tai Chi.
3 releases which caught my attention lately…
René Audiart – Omid [Blank Slate]
Traian Chereches – Cauldron [TC Studio]
Christopher Ledger – Opus Pluvia [Ada Kaleh Romania]

Violeta Năzare: Hello, Salomé! Or should I say „Bonjour”? You’re originally from Paris, a place people usually associate with romance, jazz, elegance and wine, but how would you describe its techno culture? What are your favourite clubs in Paris and how’s the underground scene shaping up?

Salome Calvino: I would describe the underground scene in Paris as a circle – a circle which I’ve seen grow incredibly in just a few years. I started going out in underground clubs and partying around 2009 – 2010, a bit late but I’m only 24 now (I was 17 – 18 at the time). Before, really few people were going out in those particular clubs and after a few months you knew almost everyone. I could go out by myself because I knew that I would always meet my group of friends or people I knew.

I was going out at Rex club, Concorde Atlantique (CrazyJack parties and Terrassa), Folies Pigalle (now Le Pigallion), Twisted (which became Concrete), Cocobeach and private underground afterparties (La Peniche de Celia, which really made its mark on me; I had a wonderful time here). It was really good back then and I fell in love with it all: I was going out every weekend just to listen to this music and to see my party friends. Now it’s really different; it’s big, I used to be the youngest at the party, now the crowd is really young. I kind of liked the old Paris underground but to be honest I’m also happy to see more and more people getting interested in underground music.

Before, you’d be considered a junky to go out to this kind of party and to listen to this music, now it’s seen as normal, but the festivals created afterwards helped democratize music too.

When I come back to Paris, I like going in Concrete – they usually have good line ups, or if there is a party at Rex or a CrazyJack event, that’s where I’m going for sure.

V.N.: What about Little Paris? You’ve had your share of Bucharest parties, joining the Bipolar crew in Control Club, playing at Bucureşti Underground events in Club Eden and at Villa Takeovers and shaking things up in For Friends Bar, so what’s your impression of the city and its electronic music scene?

I felt good straight away, I felt like I always belonged here, really strange. It’s a little Paris in terms of the architecture but the parties are crazier here; when I played for the first time for București Underground at Eden, it was full of people who really knew music and were really passionate.

I played everything I loved – even played a drum’n’bass record, in a slow pitch of course, but still tried some things that I’d never try anywhere else to be honest. We played 9 hours with my friend (HER) but I didn’t want to stop, I was totally feeling myself and speaking the same language with the people. The party and music here are really different than anywhere I’ve played or been before and every time I play or party here it’s a real pleasure, I can be myself and let go and the music is just something else. The majority of the artists here are really passionate about what they do, they don’t do it for fame but just because they can’t live without it. It’s rare these days and you can feel it in their music, really really deep. It’s just insane!

V.N.: Thank you for the stirring mix you made for our sound series! What gear do you currently work with?

S.C.: For my podcasts I usually use digitals, and vinyl mostly when I play at a party (when there are turntables available), or I combine digital with vinyl.

V.N.: And how’s production going? Is there a release on the horizon?

S.C.: Well it’s been 3 years since I started producing but I wasn’t feeling ready for a proper release before, I’m a perfectionist and I was also searching for my sound, I wasn’t mature enough and to be honest I wanted to be able to mix down my tracks by myself. It took time for me to learn because I didn’t have help but now I feel ready and there is something that is going to come out soon. Stay tuned…

V.N.: Vinyl vs. Digital – what side are you on? Which factors determine the choice?

S.C.: Well, for myself, I will always choose vinyl, just because I’m addicted to the sound, pure and unique, but as I said before everyone should choose what they feel better with, as a DJ you have to feel comfortable with what you play, or else you can’t share your emotions with anybody, so I will never judge people who choose digital over vinyl, what’s the most important is the music and passion.

V.N.: Your musical heritage is quite impressive: a jazz-singing mother and a composer father part of the French underground hip hop movement. What was it like growing up in such an artistic family?

S.C.: When I say music is my life it really is from day 1. I didn’t really grow up with my father but every time I saw him as a little girl it was around studios and his friends – mostly musicians – or in a musical environment of some sort, and with my mum it was music every day, singing, listening to jazz, rock, soul, French variety, house music, classical, I even recorded in the studio with her when I was around 5 years old. I feel blessed because they gave me the passion for music from a very young age and they always support and push me further in this field. It was hard sometimes but also magical to be raised by artists. V.N.: I was really stunned to find out you used to be a ballet dancer. What motivated you to make the switch to music?

S.C.: Ballet was my way to start working with music at a young age without doing the same thing as my parents. My mum tried to put me in solfege and singing classes at the conservatory but it was too boring for me. Classical music really touched me, I had to express myself on it; she bought me a book about ballet and I asked her to put me on a dance class.

I was already listening to electronic music with my mum since really early on (around 8) and I started to go out at an early age as well (14) but ballet was my whole life from age 6 to 18.

One day I found out that I had overstretched my feet and it was getting really painful to do point shoes. I wasn’t performing like before, I gained weight and in that state it was better for me to stop. It’s a really hard world where you have to be at your best all the time. But at soon as I stopped, music followed. I started going out more and more at underground parties to be around DJs, to go to after parties… I was free and I went a bit crazy those two years but I got really into this kind of music and one day I asked a DJ friend to show me how to play and that was it – I learned about production some months after and I got really passionate about it, it’s like I started everything again from scratch but I have no regrets. I just wasn’t meant to be a dancer. V.N.: You’ve been on quite a Romanian tour lately, on the decks not only in Bucharest, but also in Galați and Brașov at URS parties – where will you be playing next?

S.C.: I also played in Slatina this past weekend with my friends Aspot, Mihai Daniel, Dumi and Shoni – not exactly well known yet but still young and really passionate and talented – they are my little crew here. I loved discovering a bit more of Romania, it’s beautiful and the mountain side is just incredible.

After this little Romanian tour I’m going to concentrate on production. I really need to finish the tracks I’m working on and I’ll probably play in England next and I’ll be in Ibiza in June/July, but I’d rather not talk too much about it. Stay tuned. 😉

V.N.: Glad to see from your Soundcloud likes that you’re such a fan of the Romanian artists! As you know, feeder has a growing collection of mixes from local as well as international artists – did you listen to any of the feeder sound episodes? Which ones would you play on your next plane ride?

I really enjoyed Lilith’s and Crihan’s, Xandru’s mix as well.  I’d listen to these three on a plane ride, I think it’s a good combination.

V.N.: I couldn’t help noticing your unique tattoos; which was the first one? Would you like to share their story?

S.C.: Oh god, I’m kind of ashamed of my first tattoo. I’ve got 8 in total and I don’t regret any of them except for this one. I used to be very feminine, very into fashion and fashion history when I was younger, and I really liked the story of Coco Chanel – an independent woman, she was a Leo like me, born in August too. I was 18 and by myself in New York and I ended up in front of a tattoo shop in Harlem, so I got a small Coco Chanel on my back, but now I don’t care about fashion anymore. It’s kind of embarrassing but I like the story of it, there’s a story behind all of my tattoos and I like getting a tattoo in the different countries I go to. V.N.: Thank you for the talk, it’s been a pleasure!