Oina project, a photographic story about our national sport 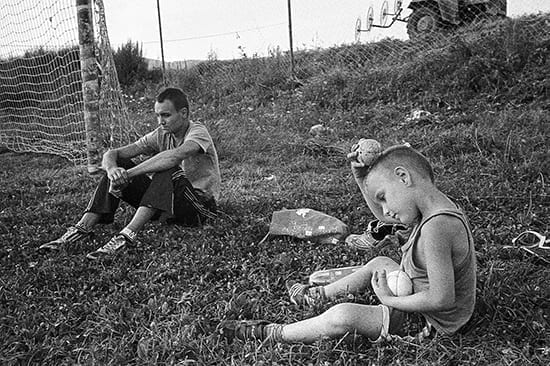 Sibiu, Sibiu County, November 2014. One thing about oina is that it can be played almost anywhere, even indoors. © Sorin Vidis

Although virtually unknown abroad, Oina is a game that still has deep roots in Romania, especially in the countryside, where it originated. In certain respects it resembles baseball, and, according to some, it is its ancestor, which has been taken to America by the Transylvanian emigrants of the 19th century. Unlike mainstream sports it doesn’t bring money and fame. 
Nevertheless, it is undoubtedly a thrilling game, which in its country of origin it is still practiced and taught by a core of highly passionate aficionados, thus offering one of the purest contemporary illustrations, probably anywhere in the world, of genuine sporting spirit. This is a long term photojournalistic project undertaken by Bogdan Boghițoi and Sorin Vidis , aiming at creating a visual record of Oina as it stands now. The project is entirely shot on film. “For Bogdan Boghitoi photography is more than a hobby. He is fascinated by the aesthetic possibilities of the real, which he tries to explore in his street and documentary photography.” Salcea, Suceava County, May 2014. The first thing that usually comes to mind when watching oina is its resemblance with baseball. But unlike baseball, the pitcher and the batter are members of the same team. They have to collaborate so that the latter could bat as further as possible. © Bogdan Boghitoi

”I started messing around with photography since late 2006. Since then my path has seen a lot of twist and turns along with learning more about photography and life. Street photography together with journalism and documentary are means of studying and better understanding both my inner self and the society I live in, through the interface of the camera.” –  Sorin Vidis Salcea, Suceava County, May 2014. Final national tournament for the 12-15 age group. At the end of the first day of the tournament. © Bogdan Boghitoi Turnu Rosu, Sibiu County, August 2014. Some of the guys playing football before the oina training started are still on the field, watching the game. © Sorin Vidis Bucharest, May 2014. Team straja is preparing for the King’s Cup. Each oina team has its own balls that are counted and carefully guarded during the practice or game. Balls are smaller and heavyer than those used in baseball. © Sorin Vidis Braila, Braila County, September 2014. Moment of concentration before striking the ball under the close guidance of the team captain. © Sorin Vidis Constanta, July 2014. One of the players is experiencing wrist pain and is treated by the medic. © Sorin Vidis Mioveni, Arges County, June 2015 Oina Federation makes efforts to instill the game virus into the younger generation and since a few years they manage to organize the Junior Girls Oina Championship. © Sorin Vidis Voivodeni, Salaj County, August 2014. Oina is an evolution of various local similar games, amongst which there is also “Una si fuga”. The locals seem to be keeping tradition alive by teaching the kids these old games. © Sorin Vidis

2 thoughts on “Oina project, a photographic story about our national sport”