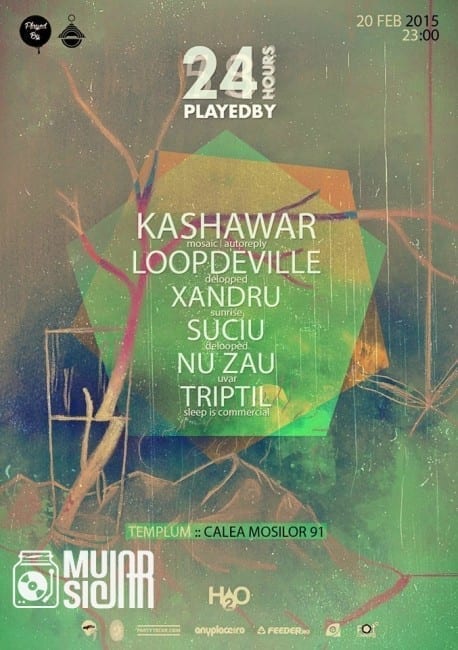 It’s been 24 weeks since we’ve launched playedby.club. And like all projects, it all started with a simple idea. The idea grew into a Facebook page and the page into a website with visitors from all over the world, growing organically.
Ever since, we’ve kept the pace, day by day, to satisfy the appetite of those of you that vibrate to the sounds of the underground. Some embraced our small project with great joy and appreciation. That’s why we decided to take it up a notch and celebrate our first 24 weeks with a proper 24 hours party!

24 HOURS of music PLAYED BY:

Kashawar [Mosaic/Autoreply/Project London]
For the first time in Romania, the uprising German is the newest member of the SOLID AM team, the agency that represents big names like Onur Ozer, Thomas Melchior, DeWalta or Sonja Moonear. Kashawar is a complete artist, distinguished by his alluring releases for Mosaic, Project London, Autoreply, La Peña, Gua Ltd, Soul.on, Pluie/Noir or Ruis and by a powerful and aggressive sound in his DJ sets. After spreading his eccentric vibes last year in Sankeys and Underground (Ibiza), Club der Visionare (Berlin) or Grelle Forelle (Vienna), we are very proud to introduce him to the Romanian party people.

Loopdeville [Delooped]
Born in Bulgaria and established in London, Loopdeville is one of the two proud owners of the Delooped Records, a vinyl only imprint label. As a DJ and producer, he fuses house, techno and experimental sounds in a musical blend of highest quality. He is best known for his release – Mazneishu, a track played by local artists like Rhadoo and Barac.


Xandru [Sunrise]
Representing that unique Romanian sound as a member of the Sunrise family, Xandru is a versatile artist that began his musical journey more than 10 years ago. He often impresses his crowd with balanced and perfectly built sets, but also with surprising releases. “Intrasi”, his latest EP is soon to be released with CrazyJack Records.
http://playedby.club/xandru-intrasi-ep/
http://playedby.club/xandru-people-from-here-vol-3/

Nu Zau [UVAR]
One of the leading producers and dj’s that have come out of Romania in the past few years, Nu Zau plays dark, percussive, funky and quirky sounds. His productions have gained worldwide recognition – Raresh, Rhadoo, Ricardo Villalobos, Petre Inspirescu, Fumiya Tanaka, Onur Ozer, Bill Patrick are only a few of the people that can be heard playing his tracks. As a DJ he seamlessly blends through old school records and new wave productions alike, crossing borders musically and inspiring people wherever he plays.


Suciu [Delooped]
From the very beginning, Suciu’s sound has been a soft mixture between house, tech house and deep house, with that special groove included. His latest release on Pressure Traxx Silver marks his progress in the past year.

Triptil [Body Parts/Sleep is commercial]
Starting to produce music in 2008, Triptil had two excellent releases on Sleep is Commercial and Body Parts, with even more upcoming projects. Continuously developing new skills and sounds, he is an expert of deep, acute and profound music.