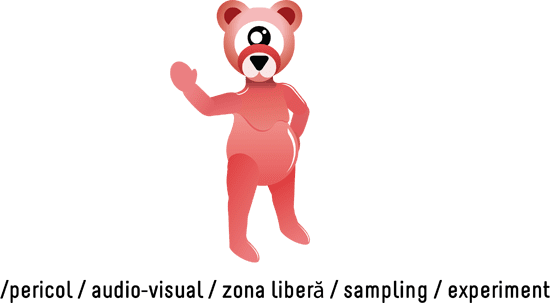 Cristian Stanciu, or Matze, has been playing, creating and reinventing music since ’92. He began working in radio, producing the show Zona Liberă (free zone, in Romanian), an ongoing activity. NSK, Blanoz Distruzos, Shukar Collective and Pericol are several projects he co-founded, and they were shaped by his musical knowledge and the playful tone that is often found in his work and which is best felt in the audio-visual mash-up called Pericol. We talked to Matze in this new insider. Hello, Matze!
This is what feeder would like to know about you:
(please, fill in the blanks)

Pericol is… an electronic music project made out of TV scraps.
Bucharest is the most beautiful when… the sun rises after the storm.
Rural or urban… rural.
Zona Liberă is… a radio show with urban music and rural stories.
In my childhood, I was… quiet.
When you watch and listen at the same time… it means you’re paying attention!
Something beautiful that happened recently… I’d rather say: nothing ugly happened lately.
The tools of the trade I wouldn’t give up on… duct tape. Ana Moca-Grama: Welcome, Matze, it’s a delight talking to the people who witnessed the birth and evolution, with the good and the bad parts, of the local electronic music scene. DJ Vasile told us, with amusement, about the beginnings, Club A and lots of vinyls. Because time passes but the memories remain, how was nightlife at the beginning of the ‘90s, and life as a dj in Web Club and Martin?
Matze: I remember the Web Club and Martin in terms of the people who were there. Places are just places, without people. We were enthusiastic and willing to waste time and our efforts were joys. We used to invite on a weekly basis a band, two, three, depending on our possibilities.

AMG: Returning to the present, what could you say about the local scene? Which are the positive parts and what are the problems? And if we were to compare these two periods, what would be the clear differences when it comes to the public, logistics, music and, of course, feel?
M: The electronic scene nowadays is better shaped. More software, more tools, instruments. Massive technological possibilities that are appearing as we speak… I don’t look at the scene in terms of positive or negative. Everyone does what they can, I think… and the listeners choose what they like. Electronic music is not mandatory. It doesn’t need to be cared for. It exists. He who searches for it finds it. I’ve been continuously searching and finding tracks made by Romanians. The public is also more knowledgeable than in the ‘90s and more willing to pay attention to new ideas expressed through sound.

AMG: Your 22 year old career was very prolific, filled with collaborations that had plenty of success and appreciations. I’d like to talk about some of them and I’ll start with the year 2009, when you launched with Rolf PERICOL (danger, in Romanian). How was the idea behind the project born? Do you have any particular way or criteria of choosing the visual parts you’re going to use? How about the audio ones?
M: Pericol is the natural result of playing with audio samples.
Sampling is a thing that has defined Rolf and me since we were little. Along with the nature, radio or TV sampling, we saw the possibilities of combining sound and video so the result would be totally amusing. This is how the project was made. And we named it Pericol. Like an electronic music band + pieces of TV, triggered live in two screens.

AMG: Another project close to all our hearts is Zona Liberă, your and DJ Vasile’s „child”, which debuted in 2005, at Radio Guerilla, and still continues online. What did Zona Liberă mean to you as a human and an artist, what did you learn from it through all these years?
M: Zona Liberă debuted in 1998, at ProFm. There we had about 40 shows. Then we began again at radio Guerilla, at the birth of the station. Zona is for me a wonderful weekly training, one that keeps me awake and sharp. A place for happy tests. AMG: A thing I’ve heard from quite a few Romanian artists is that we, as a crowd, aren’t totally open to novelty. There are many Romanian artists who ended up being appreciated abroad easier than in their own country. How do you think we could change this thing, what are the factors that prevents us from evolving when it comes to openness?
M: I don’t think we can change this thing. The ones who aren’t open to novelty can be happy, they have plenty to have fun with:)

AMG: Which are the places in Bucharest where you enjoy playingh music, or where you would organize a party?
M: Anywhere is the right place, I like playing music. More and more often I’m being tempted by free parties, where there’s a forest or the sea, mountains and creeks.

AMG: Who are the artists from the new generations that you admire a lot and with which you’d like to create something?
M: Too many. When the time comes we shall meet and maybe something comes up, no hurry.