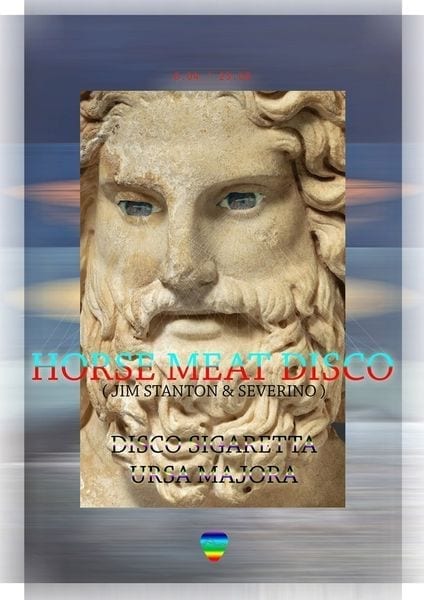 Now approaching their tenth year of existence, the four man dj club collective Horse Meat Disco have continued to lead the way in the disco field with packed residencies at their HQ Eagle London in London’s inner city Vauxhall, Cielo and verious venues in New York, Prince Charles in Berlin and Silencio/Wanderlust in Paris. Inspired by the music and inclusive ethos of New York’s heady club scene in the 80s & 90s the collective have garnered a unique reputation for throwing amazing parties with unmatchable sets. The quartet of djs each mix their own individual interpretations of the disco sound with a soundtrack that marries their expertise and shared knowledge and experience in the field. Expect all manner of dancefloor movers from classic to cosmic to deep disco, italo, punk funk, house, even techno, electric bangers and just plain old rare oddities. The collective always keep an healthy eye on the dancefloor whilst never forgetting growing current sounds.

As well as their weekly club for the more discerning end of the weekend hedonist which happens every sunday in London the collective are trailblazing the disco heat every week across Europe, America and the rest of the world. Their skills in turning the party round came to the attention of revered Parisian sound architect for Chanel Mr Michel Gaubert who regularly enliists the boys to play for Chanel worldwide. The fashion world has certainly embraced the gang having been enlisted to dj for brands as diverse as Marc Jacobs, Louis Vuitton, Lanvin, Acne and Diesel. Their current schedule sees them juggling dj dates with serious studio time as they record their first artist album collaborating with some of their favourite artists (expected at the end of 2013). For those who can’t wait to see what they come up with in the studio, the boys have three successful compilation lps out on Strut / K7! Records with album number 4 out in late May 2013. Their real passion for the nightclub dancefloor burns as strong as ever seeing them play at Festivals far and wide most notably at Glastonbury with the awesome NYC Downlow experience, Bestival Isle of Wight, Lovebox, Parklife and Warehouse Project Manchester, Electric Elephant in Croatia, Vivid at Sydney Opera House, Future Music Festival Australia-wide PS1 NYC and FYF Festival Los Angeles.

Band Interests
Horse Meat Disco is dedicated to the industry of human happiness and it pumps it out every Sunday at THE EAGLE LONDON (formerly South Central). Its the queer party for everyone; Homos and Heteros, club kids, bears, fashionistas, naturists, guerilla drag queens and ladies who munch. Musically its a disco behemoth of classics, italo disco, house, oddities and punk funk in the friendliest venue south of the river. Plus weekly buffet, happy hour, decorations, and spontaneous acts of exhibitionism.