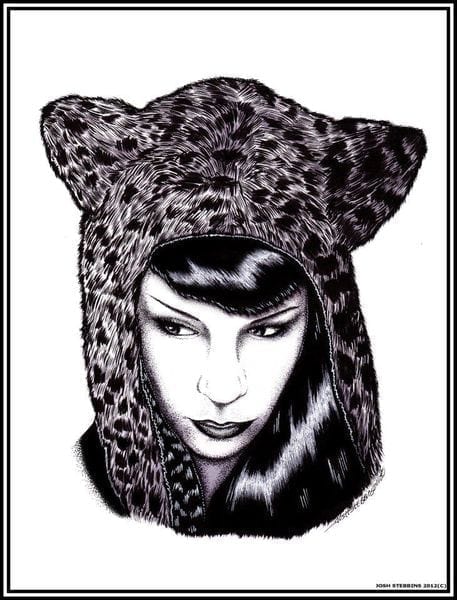 feeder.ro: How many cats do you own?
Miss Kittin: I used to own four, I had four in my life, but most of them died, there is only one left.

feeder.ro: I’m so sorry
Miss Kittin: It’s ok, it’s life you know. They had a great life so it’s okay. And now I own a dog. My dog is deaf and she’s like a cat, so I have like a dog-cat.

feeder.ro: That’s a great story! So, where did the name come from, actually?
Miss Kittin: It was just Kittin at the beginning, it comes from the first very real rave party we organized when I was in art school, we were doing decorations for rave parties and we decided to do our own party, illegally, in a military fort somewhere in our area and I was asked to play ambient music at the bar and they asked me on the flyer what name I wanted to have and I just said “Kittin” and it was like “Kick in”, “kick in to something”, so then when my friends pushed me to be a DJ, I never thought I could be a DJ or I never wanted to be a DJ but they were believing in me so much that I did it and I started to play quite a lot in my area and far and far away and then it was the trend at that time that promoters put “Miss” in front of every female DJ, so they put “Miss Kittin” and it never went away. I tried to erase it but it never worked. So.. Then, Miss Kittin sounds more glamorous with time but it was definitely not the aim at the beginning.

feeder.ro: OK, so do you come from this culture of underground raves and..
Miss Kittin: Oh, totally, because when I went to my first rave party we heard about that in our area but never been to one and then we heard from a DJ friend that there was a party so we drove in a little Renault 5 and The Hacker was already in that car, we were really packed and it changed our life, it was so amazing this freedom to party out of the club without all the codes of VIPs and entrance and bar, just to party in a free way with a lot of different people on that music. When we came home, we all were so disturbed by this experience that it was very hard to come back to reality, to see people going to work, so I was like “I will never make it”, I will never be able to have a 9 to 5 job, impossible. If these people knew what we experienced.. so I was like I will have to work really, really hard to write my own way of life. I never thought this would be as a DJ because at that time I was not DJ-ing, but I thought I will have a life where I’m free.

feeder.ro: Is it what drives you?
Miss Kittin: Oh, yes. And that’s what I’m trying to transmit with my music, because I imagine if kids come to party and they have a hard life, let’s say they feel different, they feel like they don’t belong here especially with the crisis and everything, they go to a club because they want to escape from reality. If they feel that I was like them, and that with my life I became happy, I found my space, maybe they go home and they will have the power to change what they have to change in their life to be happy. And I think music is really all about this, and it’s not about me being on stage. It’s an input you give but we are all part of it. I’m not more important than the guy living this experience.

feeder.ro: So in a sense you see music and the party experience as escaping from a reality, but at the same time it’s also empowering, it charges people with a certain..
Miss Kittin: Well, night life is not reality, and that’s where people who are lazy as human beings will take advantage of this to escape. We all need to escape. In every society you have drugs or alcohol, ceremonies, shamanic ceremonies and I think techno parties, clubs or anything like a football game is also a shamanic ceremony, you let go what you can’t handle anymore and it gives you the power to go on in your life

feeder.ro: Catharsis, as the ancient Greeks put it
Miss Kittin: Totally, so when I realized that, and it took me years you know, very long time, my DJing became more powerful because I was not doing it in the same way, I was doing it in consciousness of something much bigger than me, actually. I’m just a transmitter, I’m a receptor and a transmitter, that’s all. It’s going through, it’s like a washing machine. Music is very powerful, so I’m very happy that I found that out. It makes sense – now I know why I’m here and why I do this.

Miss Kittin: When you get into making music through collaborations, it’s very interesting because you learn to cope with someone else’s universe. And it’s very rewarding, sometimes more than being alone in the studio because you have to cope with egos and you have to find an agreement territory and if you do it right both can be pushed forward and that’s what I always try to do, that’s to push my partner forward, make him do things that he would never do on his own and me as well, by definition. So I was very spoiled to make music with other people, but I think it’s still the best. But recently, I started to make music on my own in order to collaborate, but it happened that my work was finished and I didn’t know it so I became a solo artist by accident, like DJ-ing, basically.

feeder.ro: So what about Calling From the Stars (her upcoming album)?
Miss Kittin: But that’s what I was talking about, I wrote this album on my own without noticing and I had one part ready, the pop-side part because my aim as a songwriter is to push pop music forward, and then I had the second part that I wanted to use for something else which is more ambient, where I don’t try to write songs, I just do pieces of music and I decided to bring them together because it’s my other part and I decided it would be much more interesting to show these two parts together like yeah, I do pop music with electronic sounds but I also can do that. Could you guess? You know, and I’m surprised myself and when I see the results I still can’t believe that it’s me who did it, like most of the work I’ve done actually, I still.. When I hear Frank Sinatra, every time I hear it I know it’s me but it looks like it’s someone else, you know.

feeder.ro: Generally, I wouldn’t ask a female artist this because it’s a bit weird, but considering you’re part of an all-female line-up tonight, I think I can do that. Being a woman DJ, is that.. do you feel it’s any different from being a male DJ?
Miss Kittin: Of course it is. I always said “No” because I didn’t want to see the difference, and when you close your eyes you don’t know if it’s a woman or a man playing. But as a woman, to be in the shows of a DJ yes it’s very different because society is still very different if you’re a man or a woman. Let’s say a man ca have everything, he can have a super job, a wife, kids, have fun with his friends and it’s ok. And a woman is still struggling to get the same. And I don’t think it’s fair. I want to have a career, I want to have friends, I want to have kids and I want to have a man who can look after the kids when I go to work, like men experience since the beginning of times. But of course men are complaining, they’re saying we are feminists because they don’t want to lose their freedom. They don’t want to support us, and that’s why there aren’t so many female artists around the world, also let’s say singers or big famous cooks because when you want to have a career, as a woman, you don’t have a choice whether you give up your private life or you give your job to have a private life, very often. And of course, as a woman, very often you want to have kids so you decide to leave your career, and I don’t think it’s fair. I think it’s really time to step up and say “yes, why not, I can have this too”, I don’t want to give up my career because there is no man who wants to take care of the family a little bit. I don’t say that a man can replace a mother if you have kids but I say men can help a little.. If he loves his wife and if he supports his wife is not such a big sacrifice. So still women have to do much more than man in that order.. I think society is still.. the codes of the society that a woman is a mother and as soon as you have kids you have to focus on the kids and nothing else. it’s still pretty much like that while I think a man can be as important as a mother. I grew up without my dad and I think if my mom would have worked and my dad would have taken care of me, I would have been really happy. That’s why I’m for gay marriage because if I had maybe two gay parents I would have had more love, or more attention, they would play more with me.. But we have to really break these codes, it’s never written anywhere that a woman has to be in the kitchen with the kids because we are already carrying the baby, but it’s also to the woman to give men more space you know, when the baby is born the mothers are often like “no, you don’t know how to give him the bath, you don’t know how to feed him” so men step ahead and they’re like “oh, yeah”.. so you have to give more responsibility as well to men, I think there’s so much to do but I’m never going to be there to see the result, it’s too early.