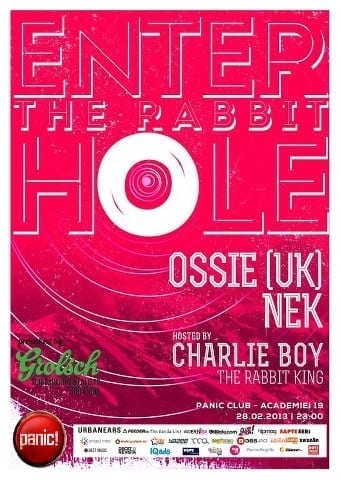 Down the Rabbit Hole: Alice is feeling bored while sitting on the riverbank with her sister, when she notices a talking, clothed White Rabbit with a pocket watch run past. She follows it down a rabbit hole when suddenly she falls a long way to a curious hall with many locked doors of all sizes. She finds a small key to a door too small for her to fit through, but through it she sees an attractive garden. She then discovers a bottle on a table labelled “DRINK ME”, the contents of which cause her to shrink too small to reach the key which she has left on the table. A cake with “EAT ME” on it causes her to grow to such a tremendous size her head hits the ceiling.

Ossie is a producer that’s been bubbling under for a while now, making moves on the UK funky underground with his own decidedly warped take on the house sound of now. Turning his hand from tribal jams like ‘Ossie Baba’ to R&B refixes that heat up a dancefloor, he’s just released the enchanting earworming ‘Tarantula’ on the freshly minted Lightworks imprint plus an infectious 12″ release on Kode9′s Hyperdub which came out summer 2011.Expect releases from 2020 Midnight Visions, Hypercolour and a second EP on Hyperdub for 2012