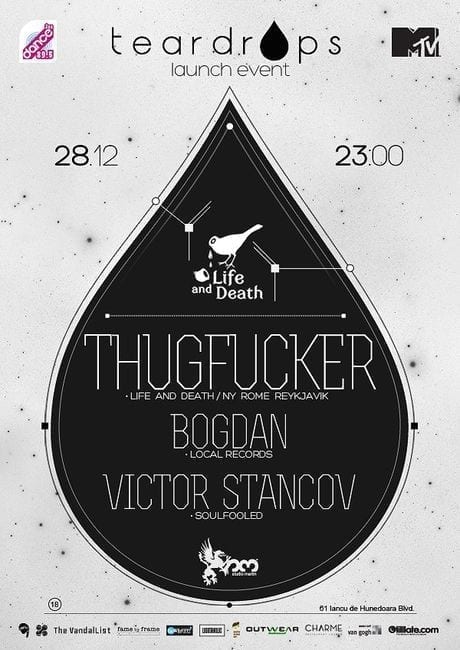 On Friday, the 28th of December, we invite you to dance with us and to enjoy the launch of a new event label:
▼ t e a r d r o p s launch event @ Studio Martin ▼

For the first time in Romania, the two members of the american project Thugfucker – Greg and Holmar – will perform Friday night, the 28th of December in the legendary Romanian club, Studio Martin. Thugfucker will arive in Bucharest after performing in Amsterdam at Wunderbar on the 27th. From the Otopeni airport they will go to Istanbul, then on Sunday they will be performing at Watergate in Berlin with Tale of Us, Clockwork and Dj Tennis during the Life and Death Showcase. They will celebrate New Year’s Eve at Bob Beaman in Munich and at the beginning of 2013 they will perform at the amazing BPM Festival in Mexico.

Looking at their itinerary we can be nothing but proud for seeing them in Bucharest on the 28th of December.
Their musical style resembles to an amazing journey with powerful house, disco, techno and minimal influences.
With a very strong experience behind the decks, the two DJs and producers can be proud for releases for Life and Death, Moodmusic, Music For Freaks, Brique Rouge, Global Underground and for their own label, Thugfucker Recordings.