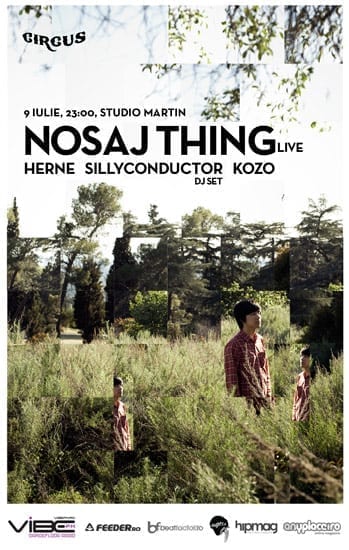 After cutting his teeth on various archaic computers and programs in his early years, Nosaj Thing now resides in the upper echelon of electronic music makers. His distinctly L.A. soundscapes and wild beat tectonics play like vignettes that affect the listener’s mind as deeply as he hits their soul. Nosaj Thing creates nothing less than the sound mastery of beat driven, experimental electronics from a gifted noise constructor.

His debut album Drift was released by Alpha Pup in June 2009 to unanimous global acclaim. Pitchfork awarded an excellent 7.9 rating, calling the album “gorgeously haunted… sonic Easter Eggs for a thousand listens.” The album peaked at #5 on the iTunes Electronic chart, and went all the way to #1 on Bleep and Boomkat.

The success of Drift led to Nosaj Thing being featured in magazines such as Spin, Fader, XLR8R, The New Yorker, Nylon and URB. He has received regular airplay on BBC Radio 1 and Los Angeles’ KCRW, while his engaging live set has made him a staple of the worldwide underground touring circuit. More recently, the development of his special visual set has led to coverage on Fast Company and NBC.

Young and uprising, totally passioned about the tech side of electronic music, Kozo isn’t afraid to touch both house and techno genre to complete his musical journey. His sets are groovy and uplifting, filling floors all around country and venues abroad like the Odeon Theatre in Amsterdam, Silo (Leuven) or the Underground club in Ibiza.

Past projects include producing the BPM Radio show with Rhadoo and Selectro with Marika, Cote and Gicu. These days Kozo is focusing all his strenght in production together with friends Praslea and El Cezere. His track “Vorbeamsterdam” is featured on the arpiar 05 vinyl. The future sounds bright !!!

Herne (finnish for Pea) is a 24 years old musical enthusiast and explorer that aims to fill in the imaginary gap between DJing and producing by not doing either of them. His live sets are track selection based journeys through a huge variety of genre-obsolete sounds without settling on any particular one. He uses the songs as producers do samples to build what he considers to be “a several hours long track based on a theme.