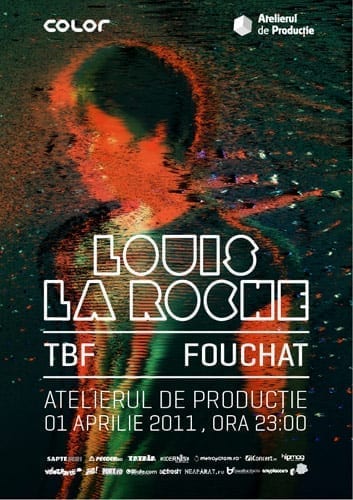 COLOR announces the first event from a series of upcoming parties.

The launching party of COLOR is set to take place next Friday, on the 1st of April, at Atelierul de Productie. LOUIS LA ROCHE will keep up the pace during the main event with TBF and Fouchat alongside.

At 20 years old, Brett Ewels a.k.a Louis La Roche was hailed as the next great hero for the British dance music scene. It’s hard to say disagree with such a statement when he’s already put out some really bangin’ tracks and remixes. Not to mention he has cited big guns like The Chemical Brothers, Basement Jaxx, Daft Punk and Cassius as his influences.

Being influenced by the all-time British legends, Louis is also drawing his inspiration from the early 90’s French house stage, Louis got quickly to the point of being mistaken for one of his idols.
His first track “Love” got credits from the blogosphere as one on TB’s creations (Thomas Bangalter, one half of Daft Punk). Certainly, that couldn’t have bothered him, but he didn’t want to be labeled as just another Daft Punk copy-cat. He managed to convince through his following releases that he was up for the challenge.

His debut album, Me & Her gained some acclaim for its airtime on Annie Mac. His second EP, Super Soaker was released last January under Ever After Records.